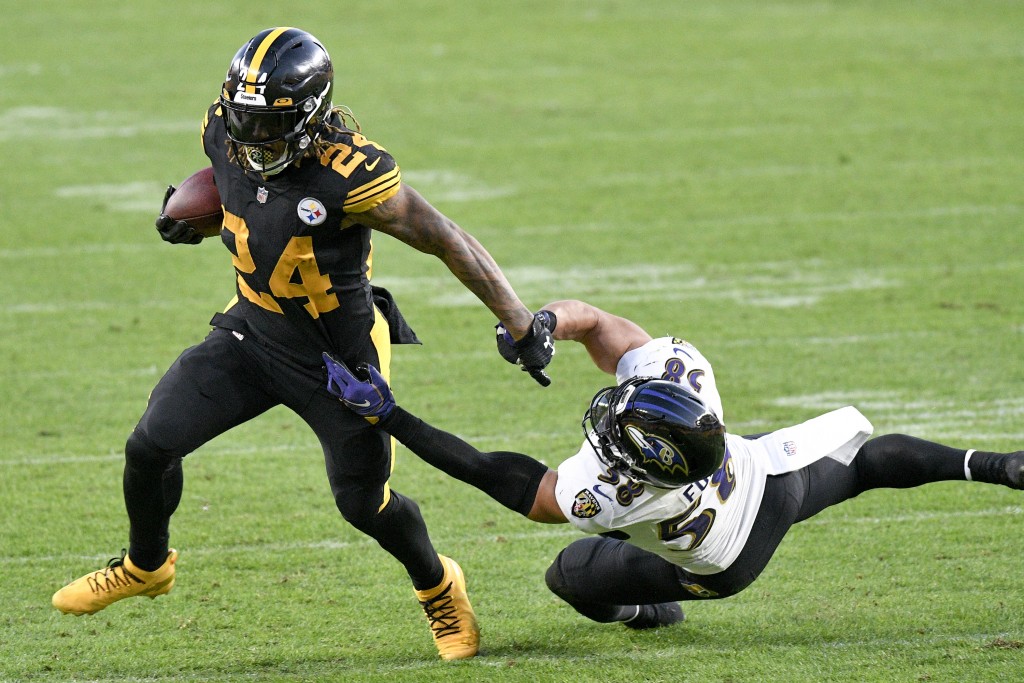 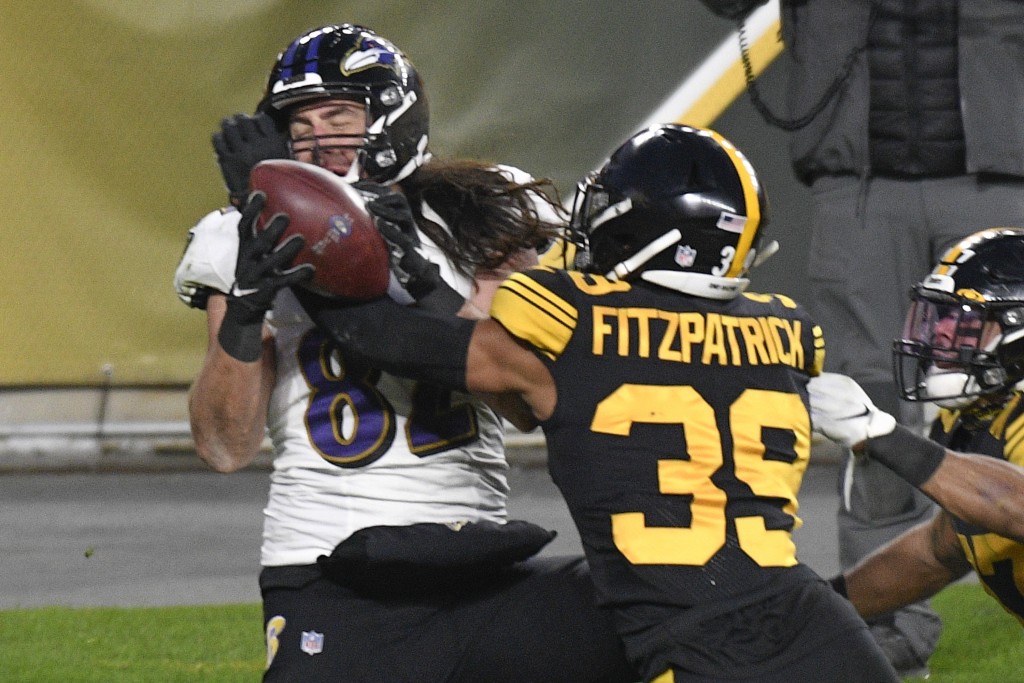 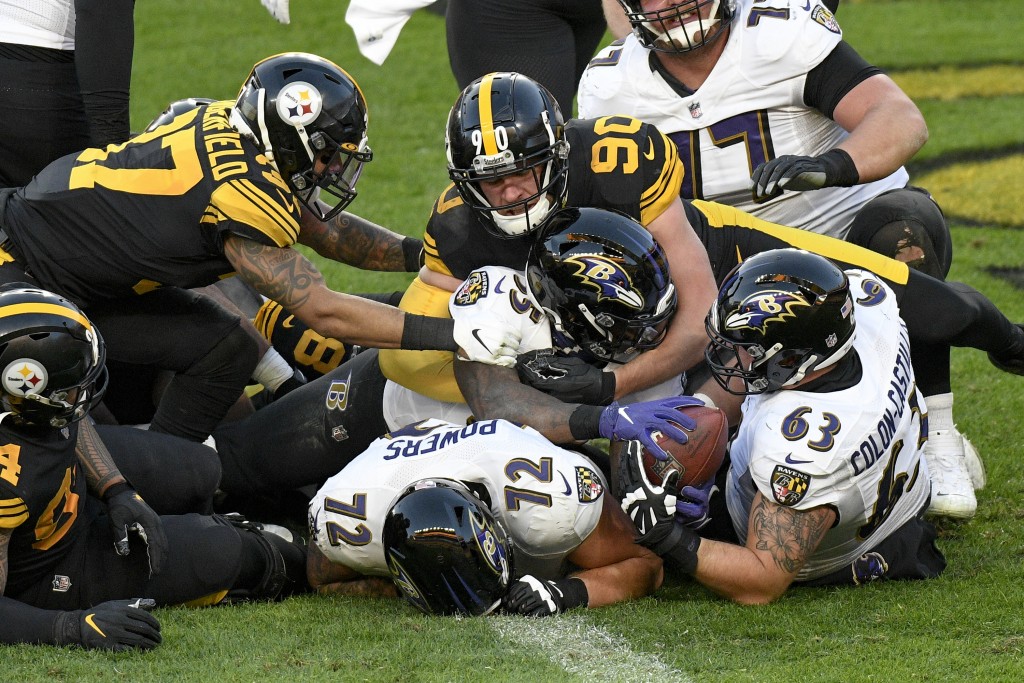 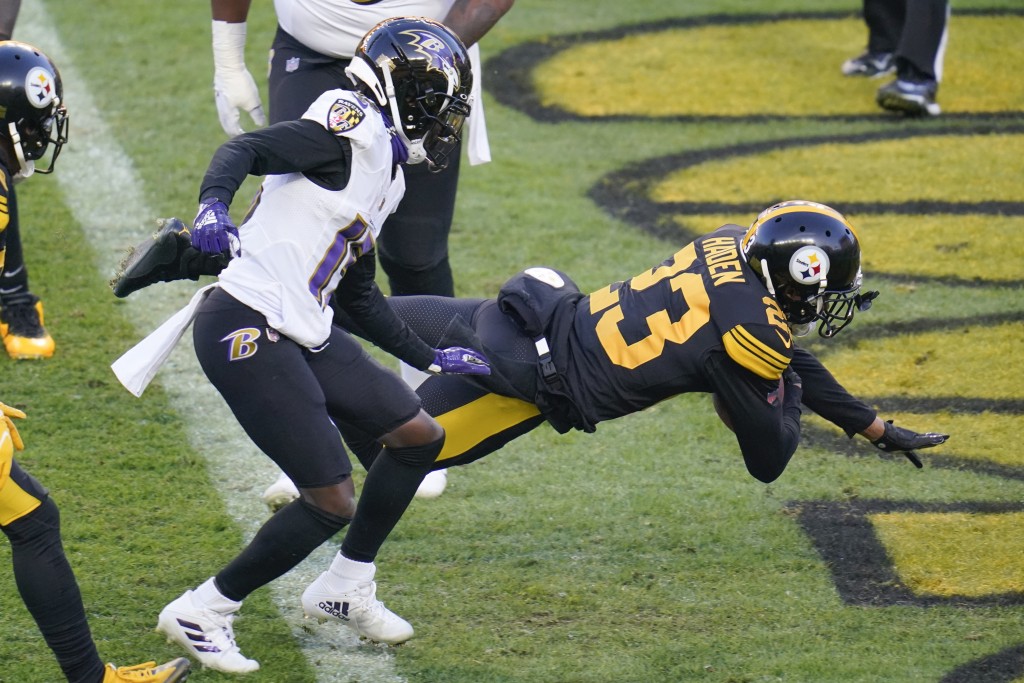 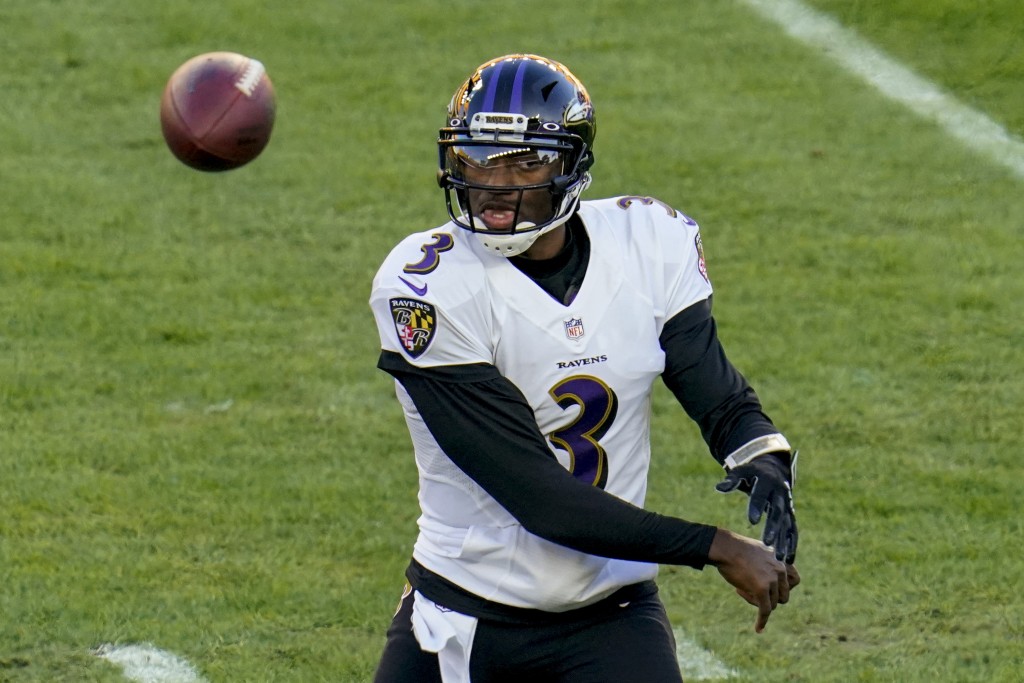 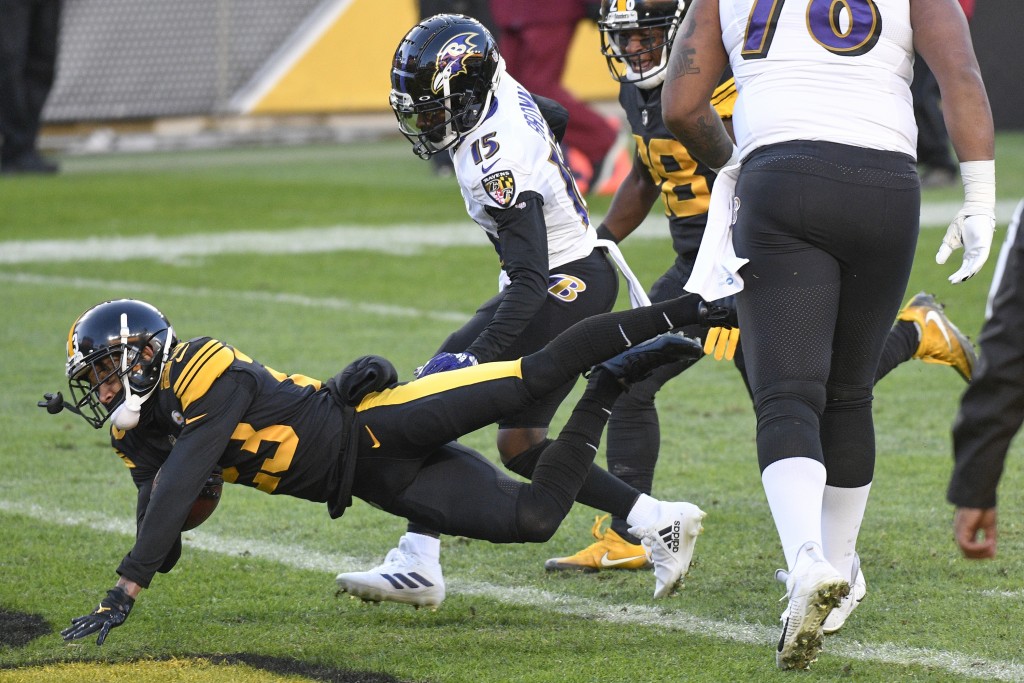 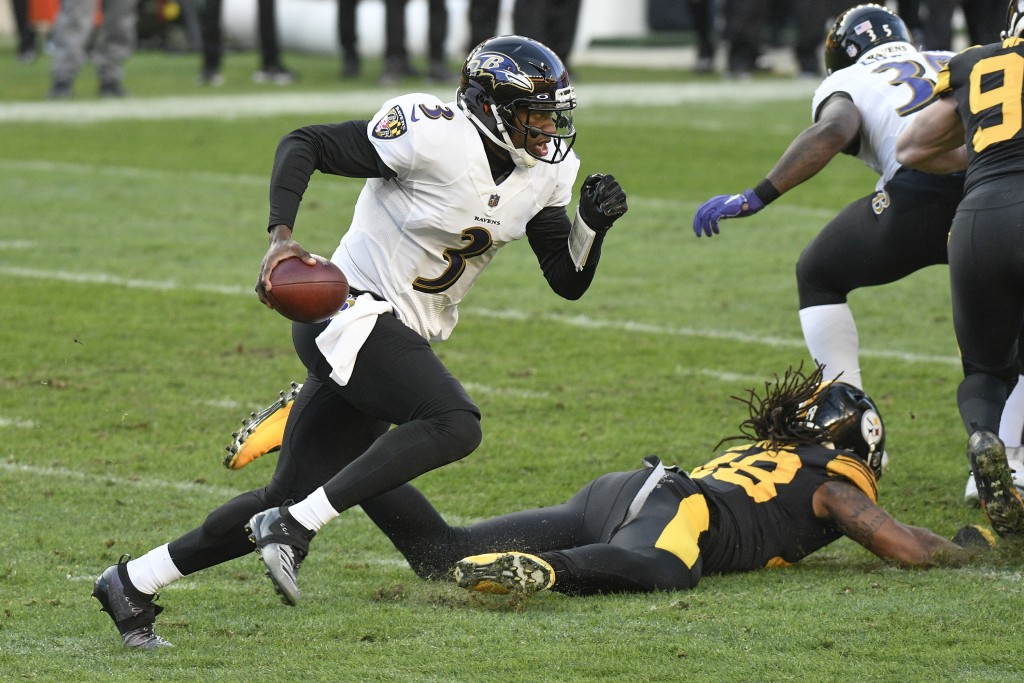 PITTSBURGH (AP) — The Pittsburgh Steelers are still perfect, even amid all their imperfections.

The Ravens (6-5) lost their third straight while playing without more than a dozen players on the reserve/COVID-19 list, including reigning NFL MVP Lamar Jackson and running backs Mark Ingram and J.K. Dobbins.

Backup quarterback Robert Griffin III struggled in Jackson's place, turning it over twice in the first quarter and completing 7 of 12 passes before being replaced by Trace McSorley midway through the fourth quarter after injuring his left hamstring.

McSorley, one of 11 players promoted from the practice squad before kickoff, connected with Marquise Brown for a 70-yard touchdown run with 2:58. But the Steelers were able to drain the clock behind a third-down grab by James Washington, eliminating the Ravens from repeating as AFC North champions.

A COVID-19 outbreak in Baltimore forced the NFL to push the game back three times: first from Thanksgiving to Sunday, then from Sunday to Tuesday, and eventually from Tuesday to Wednesday. The teams kicked off in the afternoon to not interfere with NBC's annual Christmas special at Rockefeller Center.

Good idea. The fewer eyeballs on this one the better.

While NFL commissioner Roger Goodell — shortly after saying on a conference call that the league was intent on completing the regular season on time — called it “a great game," the product on the field suggested otherwise.

The Ravens couldn't pass. Pittsburgh's receivers couldn't catch. And a contest that looked like a mismatch on paper — the Steelers went off as 10 1/2-point favorites, a rarity in a rivalry that is one of the NFL's best — was instead a festival of blah.

Whether it was the extended layoff, the sea of newcomers thrust into notable roles for the Ravens or the idea of playing on a day usually reserved for the first real practice of a typical game week, the sizzle that's long defined this series vanished in the crisp early December air.

Griffin led the Ravens to a win over the Steelers in a meaningless 2019 regular-season finale. He ran for a game-high 68 yards but also threw a Pick-6 in the first quarter on a lob over the middle that cornerback Joe Haden returned 14 yards for an early 6-0 lead.

Pittsburgh wasn’t much better. Roethlisberger fluttered a fourth-down heave into the end zone that was intercepted by Tyus Bowser in the first quarter. Ray-Ray McCloud’s fumbled punt return set up a 1-yard run by Gus Edwards that put the Ravens up 7-6.

The Steelers, relying heavily on Roethlisberger with starting running back James Conner and center Maurkice Pouncey out because of COVI-19, managed to move the ball. Finishing drives was an issue. A steady stream of drops didn’t help matters, forcing Pittsburgh to settle for a pair of Chris Boswell field goals.

The missed opportunities gave Baltimore a chance to take the lead late in the first half thanks in part to a 39-yard sprint by Griffin, his longest run since his Offensive Rookie of the Year season in 2012 with Washington.

Those days are long gone. Reality hit when the now 30-year-old Griffin appeared to tweak his left hamstring later in the drive, the same injury that forced him to exit early in the fourth quarter.

Still, Baltimore had second-and-goal at the Pittsburgh 1 when a handoff to Edwards went nowhere. Out of timeouts, the Ravens could have spiked the ball to set up a field goal to draw within two at the break. Instead, Baltimore nearly converted but Luke Willson — one of the 11 players called up from the practice squad — couldn’t bring in Griffin's pass at the back of the end zone.

That was as close as the Ravens got to scoring during the rest of Griffin’s stint. And when Roethlisberger threw a dart to Smith-Schuster in the right corner of the end zone early in the fourth quarter, the Steelers had just enough to survive.

Ravens: Cornerback Jimmy Smith left with a groin injury in the first half and did not return.

Steelers: Lost outside linebacker Bud Dupree in the fourth quarter with an undisclosed injury.

Ravens: Host Dallas next Tuesday, Dec. 8, in a game originally scheduled for this Thursday.

Steelers: Welcome the Washington Football Team next Monday afternoon. The NFL pushed back the game a day after Pittsburgh’s game against Baltimore was rescheduled.