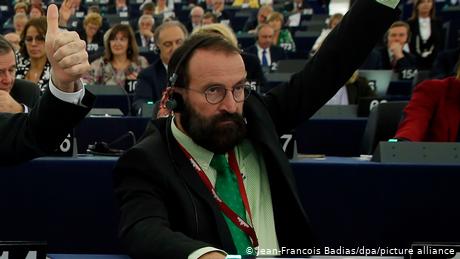 Jozsef Szajer, a founding member of Hungary's ruling Fidesz party and one of the architects of that country's controversial new ultra-conservative constitution, has admitted that he attended an illegal party last Friday night in Brussels.

Szajer, who resigned from his post as a European Union parliamentarian for unspecified moral reasons on Sunday, released a statement on Tuesday saying, "I regret to have broken the lockdown rules, that was irresponsible of me, and I will accept the sanctions that result."

Belgium remains under strict lockdown and prohibits more than four people from gathering in indoor spaces. When police in central Brussels arrived at the scene in response to a noise complaint they found more than 20 people attending an illegal house party.

Read more: Hungary and the EU: Viktor Orban's battle with the rule of law

Prosecutors originally noted that one individual, presumably Szajer, was apprehended while attempting to flee the premises. Unable to provide ID, he was escorted home, where he produced a diplomatic passport.

Prosecutors say he had bloodied hands, perhaps from injuries sustained attempting to flee the scene. Police also found drugs in his possession, though Szajer has denied they were his: "According to the police they found an ecstasy pill, but it is not mine, I have no knowledge [of] who placed it [and how]."

Sarah Durant, a spokeswoman for the Brussels Public Prosecutor's Office, said, "A report was drawn up for S.J. for violation of narcotics legislation."

"With my resignation on Sunday I drew the political and personal conclusions," Szajer said, calling his actions "strictly personal," and asking that people do not extend it either to Hungary or to his political party.

Fidesz, a defender of Christian values

More recently, Gabor Kaleta, Hungary's ambassador to Peru, was given a one-year suspended prison sentence and a fine after being caught with more than 19,000 sexually explicit images of children in his possession.

Fidesz — and its leader, Hungarian Prime Minister Viktor Orban — has consistently portrayed itself as a staunch defender of Christian values while decrying the moral bankruptcy of liberal Western society and politics.