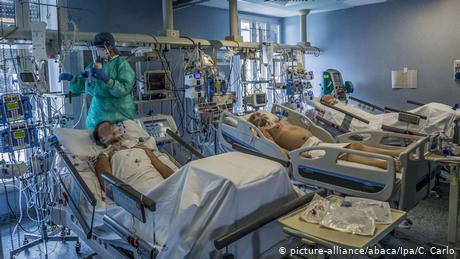 Italy was hit hard by the first wave of the COVID-19 pandemic, with the outbreak amplifying existing social problems and inequality in the public health care sector. Years of budget cuts and an aging workforce have resulted in serious staff shortages at hospitals across the country, with Italy recording the second-highest death toll in Europe.

In late November, with the country facing a second severe coronavirus wave, hospitals in the medium-risk zones of Umbria and Piedmont put out urgent calls for medical staff — though the job postings excluded foreign-born workers.

Read more: Clinics in Naples, Italy, on the brink of collapse

Under article 38 of Italy's public sector employment legislation, which dates back to 2001, EU citizens, permanent residents and those living with refugee status or humanitarian protection have the right to work at public hospitals. In addition, the government passed a pandemic decree early in 2020 known as Cura Italia, which temporarily opened up public jobs to all foreign-born medical staff with a work permit.

Authorities in Umbria and Piedmont only backtracked after medical associations and rights watchdogs called them out for their discriminatory hiring practices.

Paola Andrisani, a researcher with the anti-racist monitoring platform Cronache di Ordinario Razzismo, told DW it's common for job postings in the public health care sector to require applicants to have Italian or EU citizenship. As for the pandemic waiver, she said this has only been applied in a few isolated cases.

"Umbria has [now] included the provisions of Article 38," she explained. "What happened in Piedmont is a bit different. Calls for applications were closed, but a new announcement was published aimed specifically at foreign-born health workers, which applies the temporary Cura Italia derogation."

More recently, however, she said Piedmont published another announcement for medical staff — yet again aimed only at Italian and EU citizens. "It seems that the announcement [for migrant health workers] is just for show," she said. "It is unacceptable that different criteria are applied by different regional, sometimes local health authorities, particularly at a time when medical personnel is desperately needed."

Umbria and Piedmont aren't alone: the regional and local authorities that are responsible for posting the job notices across Italy consistently fail to apply the existing legislation and exclude foreign-born medical workers.

Migrant doctors on the front line

Foad Aodi is a Palestinian orthopedist and head of the Association of Foreign Doctors in Italy (AMSI), which has been campaigning to have foreign medical staff recognized by the public sector.

"We can say this constitutes two steps forward and one step back," he said of the recent job postings in Umbria and Piedmont. He welcomed the news but said more needs to be done to make sure any changes aren't simply patchwork and nominal.

"I wouldn't want this to remain a facade," he added. "What is needed is more clarity and more information."

AMSI estimates that about 77,500 foreign-born health professionals currently work in Italy, including 22,000 doctors, 38,000 nurses and other health care workers, many of whom have been educated in Italy. Most are self-employed or employed in the private sector, often in less secure positions.

Only 10% are employed in the public sector. Among them is Artes Memelli, a 27-year-old emergency physician originally from Shkoder, in northern Albania.

"In the first wave there was a lot of fear and insecurity, even among us doctors. Hospitals were more disorganized and PPE [personal protective equipment] was scarce. We just weren't ready," said Memelli, who has been working on the front line in public hospitals in the northern Veneto region since the pandemic began. "The second wave also caught us unprepared, but at least we do have PPE, guidelines and more beds."

Memelli is one of the many doctors "freelancing" for cooperatives that provide staff to public hospitals in Italy. Like other self-employed workers, such medical professionals do not enjoy the benefits of hired workers such as paid holidays or sick leave.

"It is a positive sign, but not enough as the future remains uncertain," she said of the recent debate on foreign workers, which has brought increased awareness of the issue. "There still isn't an actual law that says later [when the emergency is over] foreign doctors with a work permit in Italy will be able to take part in recruitment competitions for the public sector."

Looking for a way out of 'training limbo'

Memelli moved to Italy in 2015 to complete her medical studies and training. Having graduated from an Italian university, she overcame the bureaucratic difficulties and earned the right to practice in the country.

But then she was faced with another setback. Due to budget cuts and poor planning by the health sector, many young doctors have been excluded from the five-year state-sponsored training program for specialist qualifications — a prerequisite to work in the public sector, outside of the emergency room.

Back in 2011, doctors' trade union ANAAO-ASSOMED predicted that Italy would suffer a shortage of 30,000 doctors by 2021. Those shortages have already been noticeable: During the pandemic, anesthetists and other key specialists have been in short supply, as a result of a failure to allocate resources as far back as 2013 to train new generations of doctors to replace the retiring workforce. Only about half of medical graduates continue with additional training each year, with many of the others either ending up in the private sector or abroad.

"I've often thought, wouldn't I be better off going elsewhere? Towards a better future, to another European country like Germany or Austria," said Memelli, adding that she's tired of being caught up in temporary solutions. "I'd like this country to show once and for all that it cares for its professionals and wants to offer them a better future. Not only to foreign doctors, but to all the young doctors who are stuck in this training limbo."