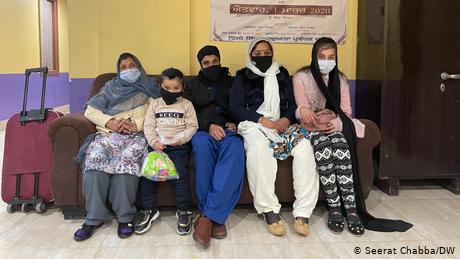 Losing a child is never easy and losing a child to senseless violence on account of one's religious identity is a tragedy that Arinder Singh would not wish upon his worst enemy.

The 36-year-old was born in Afghanistan's capital city of Kabul. In September, he left his country of birth for good.

The move was prompted by the March 25 attack at the Sri Guru Har Rai Sahib Gurdwara, a Sikh place of worship in Kabul, which left 25 people dead. The assault was claimed by the Islamic State group that has often targeted Afghanistan's minority Sikh and Hindu communities.

Arinder was addressing worshippers over coronavirus precautions when suicide bombers entered the gurdwara's compound and started shooting. That day, three members of his family, his father, his wife and his four-year-old daughter were shot in front of his eyes.

"That was the day I realized I had nothing left in this country for me," Arinder told DW.

In September, he moved to the Indian capital of New Delhi along with hundreds of fellow Afghan Sikhs. But leaving the past behind has not been easy. "I need to smile for the world," he says, explaining how he coped with the loss of his family. "I cannot show the world the sorrow that I hold in my heart."

Arinder now wants to spend the rest of his life helping others, especially those who find themselves sinking, out of the "quicksand of hate."

"Regardless of the religion you profess, violence will never be the answer to your problems," he says.

Read more: 'Afghanistan is not safe for children'

Once a burgeoning community with over 250,000 members, less than 700 Sikhs remained in Afghanistan at the beginning of this year. The number has fallen below 100 after the March attacks.

Seven families, with close to 40 people, flew in on one such flight this Thursday.

The arrival was an emotional one. A woman, who lost her husband to the attack in Afghanistan, was inconsolable. Her only link to him was now severed, her sister, Jagpal Kaur, explained, adding that the family had lost seven people to terrorist violence.

Some others shed tears of happiness, as they were reunited with their brothers and sisters, who had arrived in India on earlier flights. Together, they hope for a better future.

The new arrivals are currently under quarantine at a local gurdwara where the community kitchen, known as "langar" provides them with food. The mandatory quarantine ends after 14 days, they can live in the gurdwara's rooms till they find accommodation in New Delhi.

However, the Sikh refugees who entered India this year are not eligible for citizenship under CAA, which has a cut-off date — December 31, 2014. Instead, they must register as refugees with India's Bureau of Immigration.

Chhbol Singh, 53, flew to India on September 3. This wasn't his first time in the country. He moved to India, by road through Pakistan, in 1992 when civil war broke out in Afghanistan. He eventually returned home in 2003, under Hamid Karzai's presidency.

He owned a cosmetics business, which required a lot of travel to India in the years that followed. Fluent in Hindi, Punjabi, Pashto, Persian, Uzbek and English, his knowledge of India has allowed him to help others who don't know the country well.

"This is an opportunity that God has given us to serve others," he told DW, adding, "There are many of our brothers and sisters who have never been to this country before. It is our duty to help them through this transition as long as they are in this country."

'A good place to start'

The pandemic has not been kind to the Indian economy and new refugees are struggling to find jobs that pay a decent wage. Most stay at home and serve at their local gurdwara, helping out in any way they can.

Arinder taught children at their gurdwara in Kabul. But the system of education is different in India. Instead, he is trying to get find a job for his brother. "He is very good with computers," he said.

While the gurdwaras provide temporary shelter and funds for rations, they need to hunt for temporary forms of employment to make ends meet. Many have picked up part-time stints at shops owned by relatives. Others have set up small stands to sell snacks and small goods.

The money isn't great, but they don't have many options. Many of them will not seek Indian citizenship but will try to move to Canada or the United States, where the Sikh community has a strong presence.

But even though India serves as a temporary stopover, most Afghan Sikhs however, are happy that they are away from the violence. Leaving behind the only home they knew wasn't easy, but this was a decision they took for their children — to give them a chance at a better life.

"Our children no longer have to worry about bomb blasts and attacks every other day. There will finally be some peace," businessman Chhbol Singh says, adding, "It will take time for them to heal but this is a good place to start."