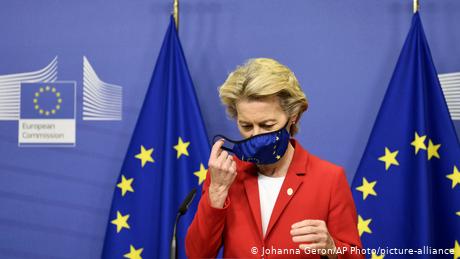 Ursula von der Leyen was never the candidate whom European Union lawmakers had envisioned for the bloc's top job. Members of the European Parliament representing Germany's Christian Democrats (CDU) and allied parties in other countries had wanted to see their lead candidate, the Bavarian Manfred Weber, in that position. Even though the bloc, the center-right European People's Party (EPP) group, won the most seats in the 2019 European Parliament election, French President Emmanuel Macron and others rejected Weber.

Ultimately, Macron put an end to the quarreling when he suggested that Germany's defense minister at the time, Ursula von der Leyen, should lead the European Commission.

In her inaugural address, von der Leyen was at pains to please all political parties. She suggested launching the European Green Deal, protecting civil liberties, and much more. Liberal MEP Sophie in 't Veld, however, says the EU chief has lacked the determination to see through her ambitious agenda. She cannot understand why von der Leyen promised to fight for the rule of law yet shied away from confronting Poland over its conduct. "You can talk about the rule of law but if you don't act, what is it worth," asks the Dutch lawmaker.

In 't Veld says the European Commission chief had made plenty of proposals but shown little resolve in seeing them adopted. This applies to many fields from privacy legislation, to budget checks and global warming, adds in't Veld. She says von der Leyen is failing to turn EU principles into law. Yet the MEP notes that von der Leyen pays attention to details, is very visible and a skilled communicator. Does she appreciate having a woman in charge of the EU's top job? "There is no typical female or male approach. I think it's important that you have a diverse team because diverse teams are always more effective, more creative," says the Dutch MEP.

The EU failed to take united action in March, when the coronavirus began to spread more rapidly within the bloc. Without coordinating their steps, EU member states sealed their borders, started fighting over supplies of masks and respirators, and prioritized national interests above all else. Von der Leyen realized that she had to counteract this fragmentation. Since then, she has fought on all fronts of the coronavirus pandemic, desperately urging member states to coordinate their actions.

Viviane Reding, who served terms as culture commissioner, education commissioner and justice commissioner from 1998 to 2014, said she appreciated von der Leyen's work so far. "She was unlucky because she fell into the middle of this crisis. So it was important to see she had the guts to get out of this crisis," says the Luxembourgish MEP. "Seeing her secure support for the [emergency coronavirus] funding and convince member states […] was like a miracle." Reding says she made EU states understand that coordination is needed. "And she started the wonderful move to buy all the vaccines for member states. I think that was a very strong move."

Reding acknowledged that von der Leyen has achieved little in the area of foreign affairs. This, however, according to Reding, boils down to the bloc's principle of unanimity voting. She says that as long as it remains in place, "As long as you have unanimity (voting rules in place) you cannot have a strong voice because there are always the Poles or the Hungarians of this world which create a problem."

Ska Keller, a German Green and the co-leader of the Greens-European Free Alliance group in the European Parliament, expressed satisfaction with von der Leyen's track record. "Within the Commission, we are seeing a big difference concerning equality," says Keller.

Unfortunately, she adds, such progress is not visible elsewhere regarding EU rules and gender equality. But Keller is pleased with the EU chief's environmental agenda so far. "Concerning environmental and climate issues we have the impression that the Commission president is serious about her ambition of pushing ahead." Keller thinks that improvements could, however, be made in the agricultural sector. Keller said the pandemic had presented unexpected difficulties for von der Leyen. "When the coronavirus crisis started, all member states did what they deemed right, regardless of their neighbors," says Keller. "Now, there have been calls for more coordination but ultimately, no country wants to be coordinated." Virtual communication has become another obstacle, Keller says. EU policymaking, which relies on compromise, is much harder when using Zoom.

The Finnish Green Heidi Hautala praised von der Leyen's personality. "She has fared well in these tough times." The MEP says it is usually EU member states resisting sound proposals and that the Commission has no way to push through its agenda, as the pandemic has shown. Hautala appreciates that von der Leyen "listens and studies her dossiers." That, she says, is what characterizes good political leadership.

Christine Verger, of the Jacques Delors Institute, says von der Leyen had to win over various political groups, which is why she made the European Green Deal, among other things, a core pillar of her plans. "She had a tough start," Verger says.

Von der Leyen's focus on the environment drew the ire of German Christian Democrat (CDU) MEP Dennis Radtke, who accused her of paying too little attention to the "existential fear of industrial workers" and the "soul of her own political family." A few German CDU members, it seems, are anything but happy with von der Leyen.

Verger says von der Leyen had initially faced criticism for surrounding herself with many German staffers. She says the former German defense minister also had disagreements with the EU's chief diplomat Josep Borrell, who viewed her as a rival. But she cemented her position during her first year in office, Verger says. "The Commission does not work like a government — it’s all about teamwork."

The coronavirus pandemic, Verger adds, has allowed von der Leyen to show off her strengths. "She shows a strong capacity for communication, is very professional."

"In France, she is more present than (her predecessor) Jean-Claude Juncker."

Verger says von der Leyen has also benefitted from her experiences as a mother and trained doctor. Her next challenge, however, will be implementing the coronavirus fund, says Verger. "It's a big challenge."

Much work, therefore, lies ahead.