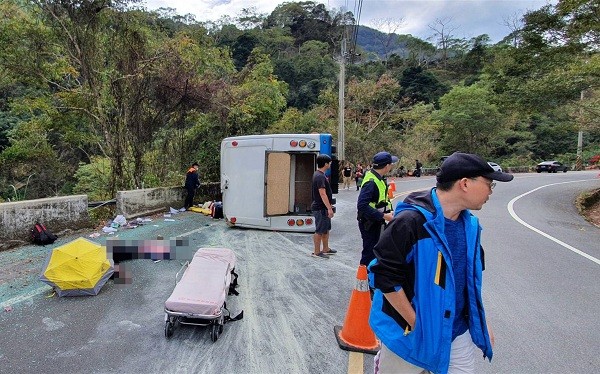 The bus, with 21 people on board including the driver, had left from Kaohsiung. When nearing the forest recreation area, the driver lost control on a curve and the bus flipped, according to CNA.

Nine of the injured were sent to Puli Christian Hospital, while the other 11 were sent to Taichung Veterans General Hospital’s Puli Branch.

According to Puli Christian Hospital, a patient surnamed Lo (羅) was listed in critical condition but was expected to survive.

A passenger surnamed Huang (黃), 57, was thrown out of the bus and died instantly. Huang’s wife suffered serious injuries but remained conscious.

The driver, surnamed Lin (林), suffered light injuries. No presence of alcohol was detected in his system.

When Lin arrived at Puli Christian Hospital, he told reporters that as the bus approached a downward slope, the brakes failed him, and so he used the hand brake, attempting to ride the rail along the hill to help him slow down.

He added that the bus had been under regular maintenance.