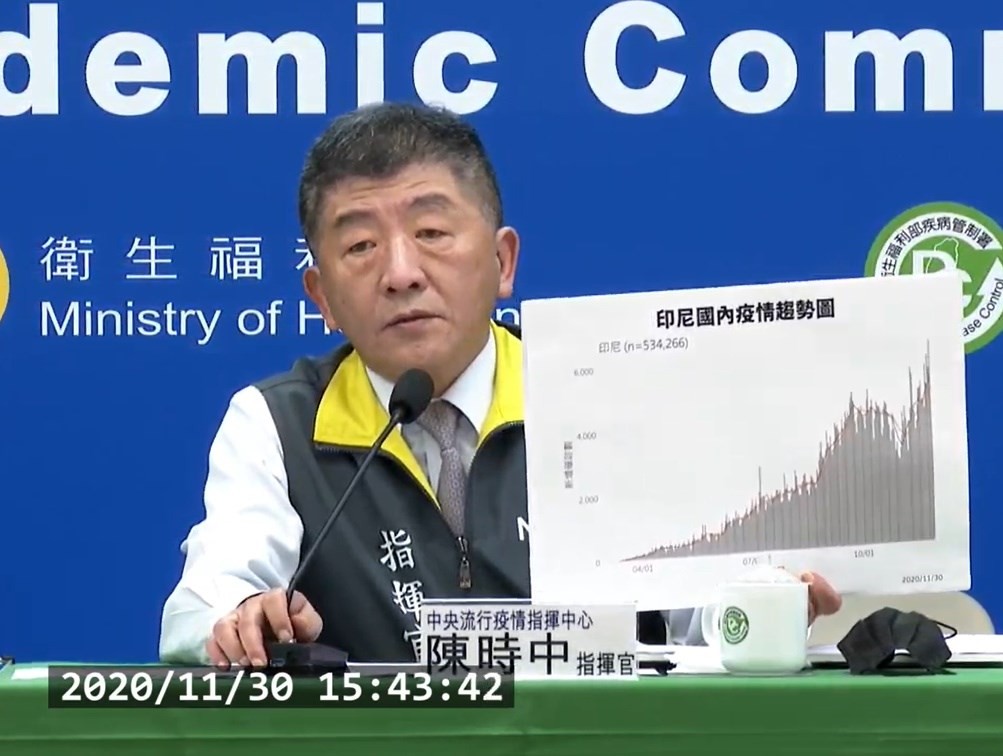 On Monday, Chen announced that 20 Indonesian migrant workers had been diagnosed with COVID-19, including 17 women and three men ranging in age from their 20s to their 40s. Their dates of entry into the country ranged between Nov. 20 and Nov. 27.

On Nov. 29, Case No. 674 began experiencing a sore throat. None of the other 19 Indonesian migrant workers have reported experiencing any symptoms of the virus.

In response to the recent sharp increase in the number of imported Covid cases from Indonesia, the CECC on Nov. 27 called on health departments to conduct coronavirus testing on all Indonesian migrant workers undergoing quarantine in quarantine centers. Out of a total of 939 persons tested, 916 received negative results, while 23 tested positive, with three announced on Nov. 29 and 20 confirmed on Nov. 30.

As for cases from other parts of the globe, Chen said that Case No. 654 is a Taiwanese woman in her 20s who went to the U.K. for school in September of 2019. Starting on Nov. 7, she began developing symptoms of the disease, including a runny nose, fever, and the loss of the sense of smell and taste.

She did not seek medical treatment in the U.K. On Nov. 11, she underwent a test for the coronavirus and was diagnosed with COVID-19 on Nov. 13.

When she returned to Taiwan on Nov. 27, she voluntarily reported to quarantine officers that she had symptoms of the virus. Quarantine staff administered a coronavirus test on the woman and she was confirmed to have COVID-19 on Nov. 30.

Case No. 669 is a Taiwanese man in his 30s who left Taiwan in June of 2015. On Nov. 16 of this year, he developed a cough, headache, and other symptoms while in the Philippines.

The health department has identified 27 people who came in contact with the man, including 11 passengers who sat in the two rows of seats directly in front of and behind him on the flight. They have been told to begin home isolation.

Another 16 persons came in contact with the man after he entered the country and sought medical treatment. One of them has been told to start home isolation as they were not wearing adequate equipment, while the other 15 are only being asked to commence self-health monitoring as they had worn adequate protective gear.

Chen said that Case No. 670 is a Taiwanese man in his 30s who went to school in the U.S. in August last year. He returned to Taiwan on Nov. 22 of this year.

After entering the country, he began his quarantine at home. Starting on Nov. 24, he started to experience a cough, runny nose, and a loss of the sense of smell and taste.

On Nov. 27, he notified the health unit, which arranged for him to undergo a coronavirus test, and he was diagnosed with COVID-19 on Nov. 30. The health department is currently identifying passengers who were on the same flight as possible contacts.

Case No. 671 is a Taiwanese man in his 50s who had lived in the U.S. for an extended period of time, with his most recent departure from the U.S. being July of this year. After returning to Taiwan on Nov. 20, he started his quarantine at home.

However, on Nov. 26 he began to experience a sore throat, cough, and runny nose. On Nov. 27, he notified the health department, which arranged to have him tested for the coronavirus.

He was diagnosed with COVID-19 on Nov. 30. As he had been at home two days prior to developing symptoms, the health department has not listed any contacts in his case.

The CECC on Monday did not announce any new reports of people with suspected symptoms. Since the outbreak began, Taiwan has carried out 110,332 COVID-19 tests, with 108,689 coming back negative.

Out of the 675 officially confirmed cases, 583 were imported, 55 were local, 36 came from the Navy's "Goodwill Fleet," one is an unresolved case, and one (Case No. 530) was removed as a confirmed case. Up until now, seven individuals have succumbed to the disease, while 565 have been released from hospital isolation, leaving 103 patients still undergoing treatment in Taiwan.