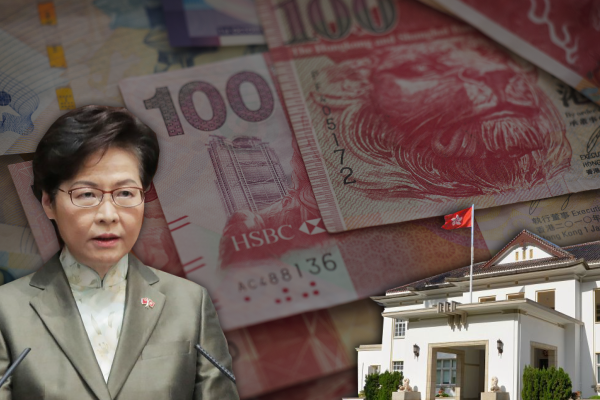 TAIPEI (Taiwan News) — Hong Kong Chief Executive Carrie Lam (林鄭月娥) admitted she is unable to participate in China's cashless society for the time being, as banking services are unavailable to her in the wake of U.S sanctions imposed on Lam and several senior Chinese officials for their role in suppressing freedom of speech and democracy in the territory.

Asked whether the sanctions have inconvenienced her during an interview with Hong Kong International Business Channel (HKIBC) on Nov. 27, Lam disclosed that she is currently locked out of banking services: "I am using cash every day for everything. I have piles of cash at home because the government is paying my salary in cash."

That is a large pile of cash, as the salary for the Hong Kong chief executive totaled HK$5.12 million ($672,188) in 2020, the second-highest among world leaders, behind only Singapore's Prime Minister Lee Hsien Loong (李顯龍), who manages to put away nearly triple what Lam does. Despite having previously dismissed the effect of the sanctions, the inconvenience Lam is experiencing reveals the reality of a global financial system dominated by U.S. dollars.

The world of international money transfers largely runs on the Society for Worldwide Interbank Financial Telecommunications system, commonly known as SWIFT. Over 11,000 banks and financial institutions made more than 33.6 million transactions a day through this network in 2019.

From the Bank of China to J.P. Morgan, these banks' participation in SWIFT is indispensable to their competitiveness. According to SWIFT, the U.S. dollar accounted for 42.2 percent of worldwide payments in December 2019, higher than the shares of the Euro, Japanese yen, and British pound combined.

The dominance of dollars makes American sanctions powerful, as the country holds the key to shutting down any international deals made in its currency by severing the connection between banks and the American payments system, including the Clearing House Interbank Payments System and Fedwire Funds Service, the BBC pointed out.

Since no international banks wish to risk losing their right to trade in U.S. dollars, they have no choice but to shy away from sanctioned figures or countries. Even Chinese state-owned banks have to examine whether any of their clients are on the U.S. sanctions list to ensure a smooth trading process.

Speaking with HKIBC, Lam declared it was an honor to be sanctioned for protecting national security.

During her annual policy address on Nov. 25, she touted the region's new national security law for being “remarkably effective in restoring stability” after months of political unrest and condemned foreign governments for interfering with Hong Kong affairs.

The Hong Kong authorities have been using the national security law to crack down on pro-democracy assemblies and silence dissidents, including by arresting multiple opposition figures and disqualifying legislators.