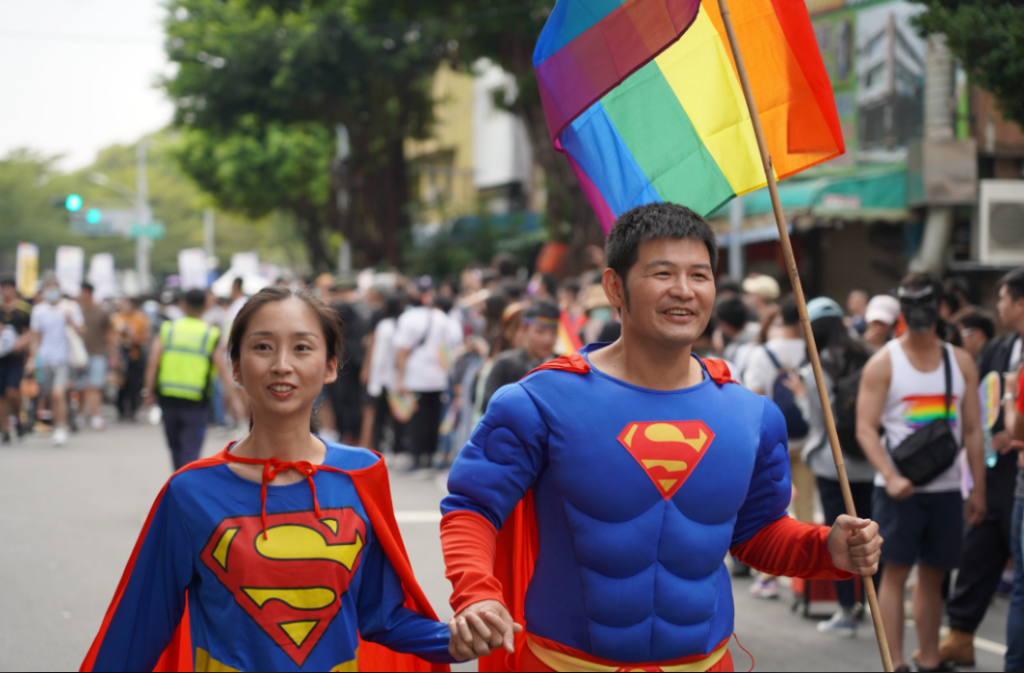 More than 60,000 people took part in the 11th Kaohsiung Pride parade -- the largest crowd in its history -- under the theme of "We! Around You!" in the southern city Saturday, according to the organizers.

The parade began at around 2 p.m. in front of Dayi Park in the city's Yancheng District and marched along Dacheng Street and Wufu 3rd Road, across the Love River, before making a loop back to the starting point.

The city government also showed its support by raising rainbow flags at its Siwei and Fongshan offices.

Mayor Chen Chi-mai (陳其邁) posted a Facebook message with a photo of a city initiative to paint a pavement at the Pier-2 Art Center in rainbow colors, saying that "love and tolerance is one of the most beautiful things about Taiwan."

Following the 4-kilometer march, a series of performances and speeches were given.

One of the speakers, Jennifer Lu (呂欣潔), head of the Marriage Equality Coalition Taiwan, said Taiwan's legalization of same-sex marriages was only a start, because there remain unresolved issues for members of the LGBT community.

For example, she said, same-sex couples still face more restrictions in adoption than their heterosexual counterparts.

Although Taiwan passed the same-sex marriage law -- Act for Implementation of Judicial Yuan Interpretation No. 748. -- in May 2019, the law still does not allow same-sex couples to adopt children with no blood relationship.

Citing the rainbow-colored pavement at the Pier-2 Art Center, where this year's parade began and ended, she said it was made possible because of city councilors supporting LGBT issues.

Taiwan Alliance to Promote Civil Partnership Rights Secretary-General Chien Chih-chieh (簡至潔), meanwhile, once again pushed the group's call for the government's recognition of same-sex marriages involving foreign nationals, even though the foreign partner's country does not recognize such marriages.

Chien said this makes it difficult for foreign partners to travel and stay in Taiwan and they are often forced to resort to student or tourist visas to stay with their partners.

At this year's parade, 2020 multi-Golden Melody Awards winner Abao, her fellow Indigenous singer Suming Rupi (舒米恩) and drag group "In Your Face" were among the list of performers.

Guzifer Leong (梁展輝), chair of the organizer -- KH Pride -- wrapped up the event at around 7 p.m., by thanking his team behind the event that drew the large number of participants, more than the 45,000 previously expected, and expressing hope that more people around the world can travel to Kaohsiung to attend the parade in the future. (By Hou Wen-ting and Kay Liu)