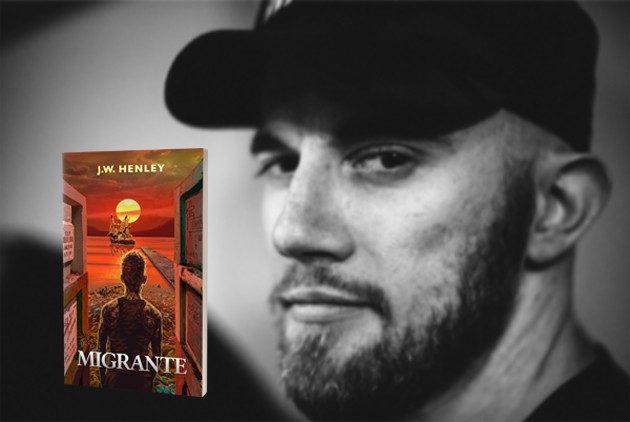 TAIPEI (Taiwan News) — At an outdoor cafe in the shadow of Taipei 101, Canadian journalist J.W. Henley recalls his first night in the city 15 years earlier: “I ended up on the floor of Taipei Main Station … in a line of homeless people sleeping on cardboard, and I was right in the middle.”

Henley had come to town seeking work. In the wake of an abridged career teaching English, he rode the train up from his school in Changhua County to interview for a position in academic publishing. After the night at the transit hub sleeping in his clothes, he got the job and stayed for seven years.

In the time since leaving that gig to become a freelance reporter, Henley has published three novels, on top of his journalism. His most recent book, “Migrante,” tells the story of a young Filipino migrant worker tangled up in the net of Taiwan’s exploitative fishing industry.

Rizal, the protagonist of the novel, is a composite assembled from the stories Henley heard in his reporting on the crisis of abuse and indentured servitude in Taiwan’s trawling fleet. The novelist is donating the money made from sales of the book to organizations that advocate on behalf of these workers.

Around six years ago, Henley was writing a music column for a local paper — he is also a punk guitarist and singer — and was contacted by a woman named Jasmine, a caregiver from the Philippines. Jasmine had been involved in the punk scene back in Manila, and in reaching out to Henley, she thought she might find a kindred spirit.

When he went to meet her, Henley found himself back where he began — Taipei Main Station, the place where migrant workers from all over Taiwan congregate once a week, an easy spot for people spread across the island to reach on Sundays, typically the one day of rest for those lucky enough to have it.

“She brought along a dozen or more of her fellow caregivers,” he said, “and they just started sharing their stories with me about different ways they had been exploited — sexually abused, intimidated, taken advantage of economically — and they wanted these stories told.”

Soon Henley was writing about the struggles of migrant workers in Taiwan for regional papers, and here and there would report from the Philippines. While Henley recognizes the importance of this work, he always felt more could be done.

“I’m not saying it’s not impactful,” he said, “but with the news cycle and things the way they are, it turns over so quickly. Something gets printed, there’s a groundswell of reaction, and then it goes away.”

Inevitably, given his background in fiction, other ideas began to percolate: “Eventually, I thought, I’ve been doing this for a few years, I can take what I know, I can compress all the different stories into a work of fiction, and I can try to use it to raise awareness and money for various groups.”

The resulting novel is a propulsive and devastating account of what is essentially slavery in a liberal country. Rizal gets swept along by a cascade of cruelty that begins with his employment broker in the Philippines and carries over to his time on the Taiwanese fishing boat and beyond.

And yet while Henley’s portrayal of Rizal’s life is uncompromising in its vision of hell, the writer is careful to apply restraint. In several chapters, someone with a more sensationalist streak might have descended a few more circles in search of Satan himself; however, the aims of the book are in part journalistic, and accuracy is paramount.

None of this is to say Henley’s prose lacks passion or shirks lyricism. The novel is written with brio and self-assurance, and Henley has a particular facility with descriptions of a fallen natural world.

Take this from a scene when Rizal is riding in a van through the plains of western Taiwan, in the orchards noticing “white plastic bags that flew like the flags of a new harvest.”

Many of the descriptions are infused with the menace and fear that Rizal — penniless, debt-bound, and without Chinese or English — feels as he navigates Taiwan. Here, the young migrant looks back at a train tunnel from which he has just emerged: “… there was nothing to look back to. Only the immovable mountain and the rain turning its bare black outcrops amid the foliage slick like the blood on a butcher’s floor.”

Other effects lean on Rizal’s relative innocence to derange the senses and see the world through fresh eyes. In one scene, the soon-to-be fisherman is boarding an airplane for the first time:

“He eyed the walls of the gangway. The small windows looking out to the tarmac, shafts of blinding light smashing through them like girders careening down from the sky. He thought of turning back.”

After steeling himself, Rizal later peeks out of the plane's window: “Out on the tarmac men in bright-orange jumpsuits with vests with neon stripes crossing their chests and backs were at work. He wondered how they got their jobs. Who they knew. Who they had to pay to get hired.”

This is near perfectly tuned, and it could not have been easy to get into the head space. Indeed, the question of narrative point of view in a novel like “Migrante” is a danger zone, given the complexion and provenance of its author. Henley deserves credit for the brave decision to write from the close third-person perspective of Rizal.

Often after the publication of a novel like this, a certain kind of critic can be found waiting in the bushes, eager to spot a misstep on the part of the cultural appropriator. So far, Henley has headed off this style of attack, presumably by a combination of personal gravitas and writing extremely well.

If there is any soft spot in the novel it might be the ever so slight caricaturing that creeps into some of the villains. For example, Henley writes of an overfed labor broker in the Philippines: “He clasped his hands over his belly, rubbing it like a pregnant woman caressing an unborn child. A sound stirred within his stomach and a belch escaped his lips.” A bit later, Rizal watches as the man gets up “to waddle over to a water dispenser.”

Parallel issues pop up in the characterization of the fishing boat captain, who is so relentlessly evil that he is incapable of even small kindnesses. While, in a sense, it is easy to believe these people are not an exaggeration, surely, these figures come in all physiques and temperaments, and a heightened sense of moral complexity would get us closer to an understanding at no expense.

Nevertheless, these are minor gripes about an outstanding novel — and one written by someone who knows what he is writing about. One can only hope a Taiwanese translation arrives soon and makes its way into the right hands.

"Migrante" by J.W. Henley is published by Camphor Press, www.camphorpress.com