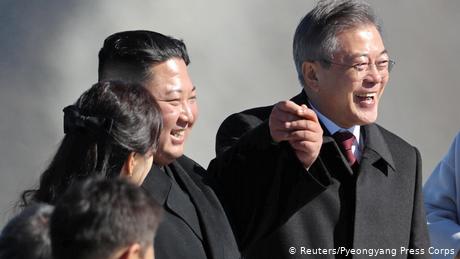 South Korean President Moon Jae-in is attempting to replicate the success of the "sports diplomacy" that paid off at the Pyeongchang 2018 Winter Olympic Games, with analysts suggesting that the nations with the most at stake in northeastern Asia may well embrace his proposal for a four-way summit in Tokyo next summer.

On Saturday, Moon hinted that he is aiming to revive stalled discussions on the denuclearization of North Korea at a summit in Tokyo to coincide with the Japanese capital hosting the delayed 2020 Olympic Games.

Last week, Park Jie-won, the head of South Korea's intelligence service, traveled to Tokyo to discuss the plan with Japanese Prime Minister Yoshihide Suga. It is understood that Park outlined the idea of a summit in Tokyo that might help reduce tensions in the region, although the Japanese leader's response to the proposal is not known.

At the same time, South Korean Foreign Minister Kang Kyung-wha was on an official visit to the United States where meetings were held with security and diplomatic aides to President-elect Joe Biden.

It is considered likely that Kang made similar overtures to the incoming US leader's team about the potential windfalls associated with a first face-to-face meeting between Biden with North Korean leader Kim Jong Un.

"The Pyeongchang Olympics were a turning point in relations between North Korea and the South as well as the US because the North sent a team of athletes, we had a joint North-South women's ice hockey team and a high-level delegation came from the North," Ahn Yinhay, a professor of international relations at Korea University in Seoul, told DW.

That delegation included Kim Yo Jong, Kim Jong Un's sister, who watched some of the events seated just feet away from US Vice President Mike Pence and Ivanka Trump, the daughter of President Donald Trump.

Just five months later, Trump met with Kim in Singapore and began a diplomatic relationship that the US leader famously described as "beautiful." A second summit in Hanoi in February 2019 ended abruptly when it became clear to the US side that Kim was not interested in making the nuclear weapons and long-range ballistic missiles concessions Washington was demanding — but even critics conceded that the very fact the two sides were talking was a breakthrough of sorts.

"Sport offers a good opportunity for two sides to talk," says Ahn. "Richard Nixon went to China in 1972 for what became known as 'ping pong diplomacy' and helped open up China to the US. The same thing could happen with North Korea next year."

Stephen Nagy, an associate professor of international relations at Tokyo's International Christian University, says Moon has acted swiftly to propose the four-way summit on the fringes of the Olympics as there is growing concern that Biden will revert to the policy of "strategic patience" that was practiced under President Barack Obama.

The fear, he said, is that any momentum that has been built up under Trump will be lost and the entire denuclearization debate will return to square one.

"Moon thinks that a return to strategic patience will mean the end of any possibility of a settlement of the Korean issue," he told DW. "By putting this plan on the table, he is sending a message to Washington that a new form of diplomacy is required to engage North Korea."

Perhaps the biggest obstacle to Biden becoming proactive on North Korea is the scale of other problems confronting him at home — with rising numbers of coronavirus infections and a contracting economy likely to take up most of his attention, at least in the early days of his new administration.

Clearly, Moon is keen on achieving a meaningful breakthrough in relations with the North as he enters the last year of his presidency. Still, Ahn Yinhay believes Japan itself might be tempted to drop the hard line it has taken on Pyongyang in the past, notably after the North refused to cooperate in investigations into the fate of dozens of Japanese nationals abducted by the North in the 1970s and 80s.

"I think that Suga and the leadership in Tokyo will be open to the idea of talks with the North if there is the possibility of concessions on the abductees," she said. "I also believe that an event like this, tied to the Olympics, would attract a lot of attention to Japan, which would be appealing to Suga, and there is the possibility of some good news emerging after so much bad news."

Given the potential appeal to three of the four governments being sounded out on the idea, the ball would appear to be in Pyongyang's court.

"Kim is smart enough to see this as the opportunity it is," says Ahn. "Right now, with Trump leaving office, he is probably feeling very isolated. He is still under international sanctions and he will see this as a good chance for him to win some concessions."

Nagy concurs, noting that a summit could further raise Kim's profile as an international statesman and he could, in a best-case scenario, convince the nations seated opposite him at the negotiating table to lift the sanctions crippling his regime.

"He will weigh what he can get out of a meeting like this and he will be hoping for sanctions relief and, possibly, nations normalizing relations with Pyongyang," he said. "We will have to see how far both sides are willing to go to reach a meaningful agreement."