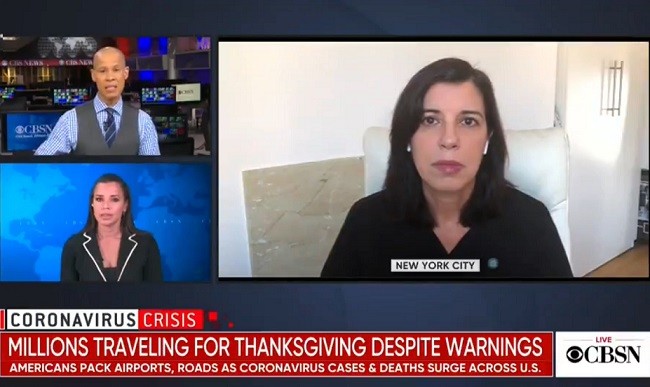 TAIPEI (Taiwan News) — As the U.S. heads into Thanksgiving weekend and millions of Americans defy social distancing recommendations in spite of a surging number of cases, CBS News contrasted the country's response to the crisis with that of Taiwan's, where life has carried on more or less as usual.

An estimated 50 million Americans, or 15 percent, are expected to go through with their Thanksgiving pilgrimage this year despite a resurgence of COVID-19. New cases have been setting daily records, and Tuesday (Nov. 24) was the deadliest day since the first wave of the virus gripped the country this spring.

In an interview with CBS News on Wednesday (Nov. 25), Gramercy Pediatrics founder Dyan Hes observed that the U.S.' disjointed response to the crisis largely stems from the wildly divergent regulations in place at state and local levels. The New York City-based pediatrician said while many in her city, an early epicenter in the outbreak, are erring on the side of caution this Turkey Day, she fears those in areas just now being hit are "naive."

CBS News anchor Vladimir Duthiers followed up with the question "What is South Korea doing right? What is Taiwan doing right that we in the West can't do?" He contrasted the grim scenario facing the "the most powerful country on Earth" with the situation in Taiwan, which is "having full-on rock concerts now with thousands of people — and they're not getting sick."

Hes responded by pointing out that mask-wearing was already widely accepted in East Asian societies such as South Korea, Taiwan, and China, and that heavy pollution in the region had played a key role in normalizing the face coverings.

She also observed that people are generally more "used to listening to their government" in Asia, not only in authoritarian regimes like China and Singapore but even in democratic nations, whose smaller, more homogenous populations have not experienced the politicization of mask-wearing and other preventative measures that the U.S. has.

Since the global outbreak began in the Chinese city of Wuhan, Taiwan has recorded only 625 confirmed cases, 533 of which were imported. In addition to society-wide compliance with epidemic prevention policies, the country owes its success to its widespread contact tracing, enforcement of quarantines, strict border restrictions, and an early suspension of flights from Wuhan.

Thanks to its success in nipping its outbreak in the bud, Taiwan has not had to implement a single lockdown. This has enabled it to make headlines by hosting a two-day music festival attended by 25,000, the world's largest Pride parade, which also drew tens of thousands, and regular exhibitions, concerts, and other major events.