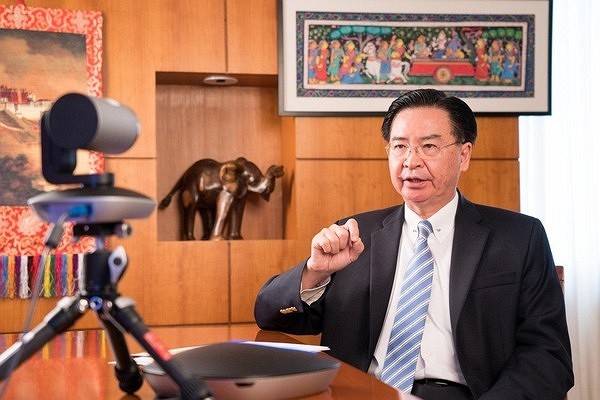 TAIPEI (Taiwan News) — Taiwanese Foreign Minister Joseph Wu (吳釗燮) has urged the Norwegian government to correct its mislabeling of Taiwanese living in the Scandinavian country as soon as possible.

Wu was interviewed by Aftenposten, Norway’s largest newspaper, on Nov. 19, according to a press release issued by the Ministry of Foreign Affairs (MOFA) Tuesday evening (Nov. 25). He spoke with reporter Kristoffer Rønneberg on how Taiwanese students have been assigned the wrong nationality (China) on their Norwegian residence permits, Taiwan's exclusion from the World Health Assembly (WHA), Taiwan-U.S. relations, and the cross-strait situation, among other topics.

According to a Taiwanese lawyer working in Norway, the Nordic country began listing Taiwanese residents' nationality as “China” in 2010, prompting the attorney to launch a movement urging the government to correct the mistake. Despite repeated protests against the name change, the Norwegian government has failed to respond, angering many Taiwanese living and studying in the country and resulting in a lawsuit initiated by the Taiwanese in Norway Nationality Rectification Campaign.

When the Norwegian Supreme Court rejected the lawsuit on the grounds of there being "no substantial damage" to the well-being of resident Taiwanese, the group decided to appeal the case in the European Court of Human Rights (ECHR), of which Norway is a signatory.

MOFA has previously stated that the mislabeling of nationality violates human rights and that the ministry would assist the group in correcting the issue.

In the interview, Wu claimed the error has upset the Taiwanese public. He cited Article 15 of the UN's Universal Declaration of Human Rights, which states that "Everyone has the right to a nationality, and no one shall be arbitrarily deprived of his nationality." In addition, Wu pointed out that Article 6 of the European Convention on Human Rights guarantees the "right to a fair hearing."

The foreign minister emphasized that Taiwan is not part of the People’s Republic of China, and he accused the Norwegian Supreme Court of failing to protect the rights and interests of Taiwanese students. He concluded by calling on the Norwegian government to acknowledge the severity of the mistake and correct it as soon as possible.