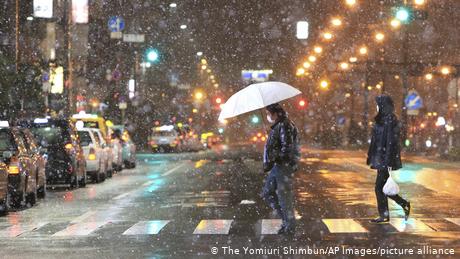 An adviser to the Japanese government on the coronavirus pandemic has told DW that the pace of infections across the country is accelerating.

Kazuhiro Tateda, president of the Japan Association of Infectious Diseases and a member of the government's emergency health committee, says the next two weeks are "critical" in bringing the crisis under control in a nation that had previously prided itself on keeping case numbers and deaths relatively low.

Tateda also warned that a failure to curb the spread of the virus will mean the reimposition of strict limitations on movement, the closure of public facilities and a renewed threat to the viability of countless companies across the nation.

"Unfortunately, the situation is certainly becoming worse, and while we do not know the exact reasons, there are several factors behind the spread," Tateda said. "We are seeing lower temperatures, which we always believed would encourage the virus to spread, while people who stay in confined spaces, such as at home, are promoting transmission as these spaces are not sufficiently ventilated," he added.

"We are also seeing that people are just tired of isolating themselves, limiting the places they go and the people they see, so they are letting their guard down," he said.

Read more: How Japan's mask culture may have saved lives during coronavirus

"Right now, the most dangerous thing that you can do is to go out drinking and eating because you are almost certain to be in an unventilated indoors space. You are going to be drinking alcohol, which tends to make people speak louder and exhale more microdroplets. You are also going to be in close contact with other people and you are almost certain to be forgetting to follow the safety protocols," Tateda said.

Japan's health authorities reported 1,519 new cases on Monday, the first time the figure had been below the 2,000 threshold in five days. There were 314 additional cases in Tokyo on the same day, above the 300 level for a sixth consecutive day. In total, there have been 128,000 positive cases of the virus across the country and slightly more than 2,000 fatalities.

Despite the warnings, the national government has stated that it intends to keep schools open, although education authorities are calling on teachers to exercise the "maximum vigilance" ahead of new guidelines on keeping children safe for the duration of the winter.

The government's much-championed "Go To Travel" campaign, however, has taken a blow after Yasutoshi Nishimura, the minister overseeing the pandemic response, said Tuesday that the popular tourist destinations of Osaka and Sapporo, the largest city on the northern island of Hokkaido, will be excluded from the promotion for the next three weeks due to a sudden spike in cases.

There is also the possibility that Tokyo will be excluded from the subsidy campaign – under which effectively half of visitors' transportation and accommodation costs were covered – in the next few days as cases continue to climb.

And Tateda, who has been advising the government on the issue, says the entire "Go To Travel" scheme may have to be suspended if – as suspected – the third wave continues to build.

"It's not just the big cities that are being affected as more people come and go," he said in a statement. "We are seeing similar increases in infections in Aichi, Hyogo and Kanagawa prefectures. The numbers are rising too rapidly so we need to at least discuss suspending the campaign for the whole of Japan instead of just some selected areas."

Makoto Watanabe, a university professor who lives in Sapporo, says that a lot of people are more worried today than they were in the earlier phases of the outbreak, although there are a minority who insist on carrying on with their lives regardless of the warnings.

"People are very concerned, and a lot of people who had serious doubts about the wisdom of the 'Go To' campaign are saying it was to blame for the situation we are seeing here today," he told DW.

Read more: Coronavirus: Will Japan be ready to host delayed Olympics next year?

A total of 216 new infections were reported across the prefecture on Tuesday, along with six deaths. All the fatalities were aged 60 or older.

"A lot of people are saying that it's going to get much worse as winter has only just started," Watanabe said. "Temperatures are much lower here than in the rest of Japan and we typically get more influenza cases every year as well, so the biggest concern is that we get a serious outbreak of flu at the same time as the pandemic is still going on."

Yet, there are plenty of people – particularly younger generations – who are simply bored of being careful, social distancing and taking the precautions that have been recommended for the last nine months, he said.

"It's almost as if they have got used to this being the situation and they can't put up with it anymore, so they are going out with their friends again," Watanabe said. "For people in their 20s, there's a lower risk of being symptomatic and of being seriously ill, but for the older people around them, the risk is far higher. Personally, that is what I worry about."