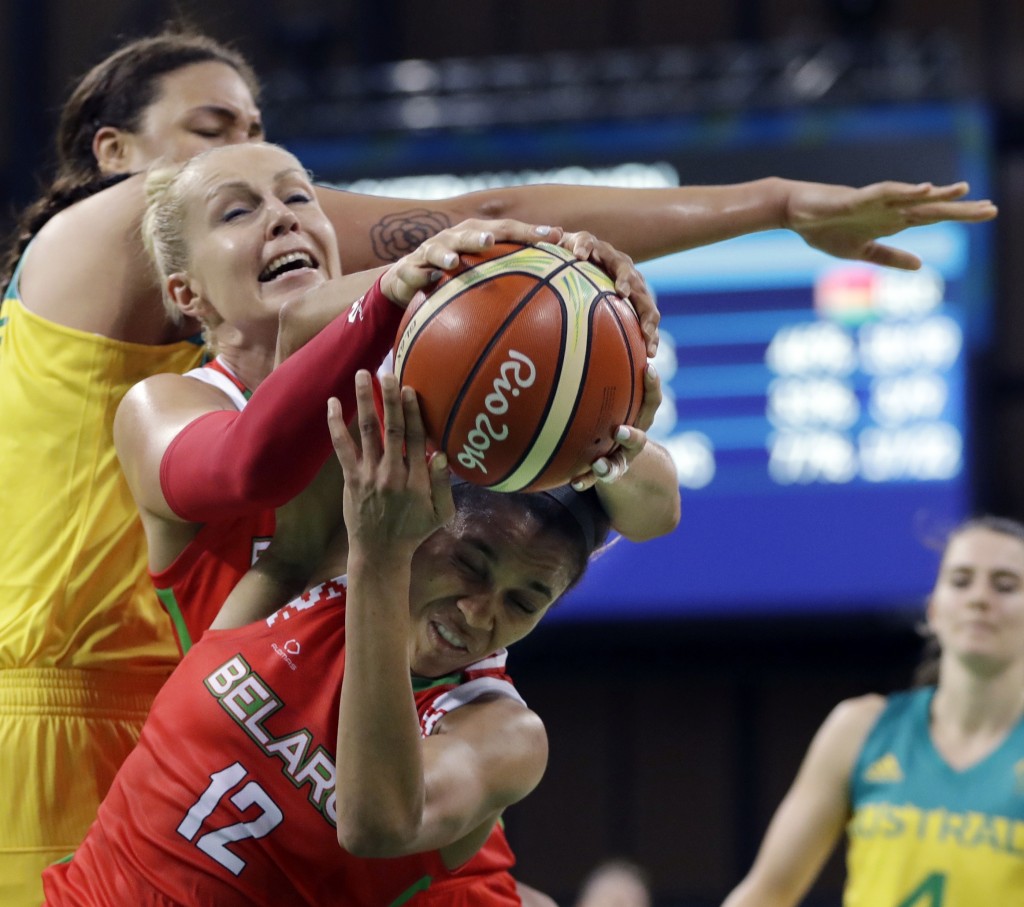 She spent 15 days in jail in October after peacefully protesting against President Alexander Lukashenko's disputed reelection, and then contracted the coronavirus earlier this month while she's been in Greece.

“I couldn’t be quiet and ignore or make it look like nothing was happening in my country," Leuchanka said in a Zoom interview. "I used my voice to support the people of my country and to stand with them because I was seeing how the president election went without any international observers.

“There are a lot of people being arrested the last couple of months. Most of them are taken to jail for participating in demonstrations,” she said.

Leuchanka was aware of all of the support she received from the WNBA players and their union and said what they did this summer, standing up for social justice, had an impact on her.

“It inspired me and a lot of my fellow athletes,” said Leuchanka, who played four seasons in the WNBA. “America is a country of freedom, now we are dealing with a dictatorship where you can get in trouble for your posts on Instagram. It definitely has influenced me, being in the WNBA, and America has taught me to have a different mentality and not be OK with the way people are treated.”

Leuchanka was detained at Minsk Airport in late September as she planned to head to Greece to receive treatment abroad and train.

“I didn’t have a chance to get through check-in. I was packing my bags in plastic and then there was a tap on my back. I saw two police officers," she said. "They greeted me and said they have to arrest me for participating in the protests”

From there the 37-year-old center, who helped the Belarus basketball team to two Olympic appearances, was sentenced at a short hearing and taken to jail.

Nearly daily protests have occurred since Aug. 9, when Lukashenko was declared the winner of the presidential election with 80% of the vote. The European Union and the United States denounced the vote as neither free nor fair and introduced sanctions against top Belarusian officials accused of rigging the vote and engineering the post-election crackdown.

In the first days of the protests, Belarusian authorities cracked down brutally on protesters, with police detaining thousands and beating scores.

Lukashenko, who has run the former Soviet nation with an iron fist since 1994, has accused the West of fueling the protests and relied on support from his main sponsor and ally, Russia, to dig in.

His main challenger, Sviatlana Tsikhanouskaya, was said to have received only 10% of the vote. Tsikhanouskaya and her supporters refused to recognize the results of the vote, saying it was riddled with fraud, and some poll workers have backed up that claim.

Leuchanka said that the protest she was at was peaceful. Protestors even cleaned up after themselves, hanging garbage bags from trees and taking their shoes off when they get up on benches.

“We just wanted to be heard,” said Leuchanka, who played college ball at West Virginia.

She wasn't completely surprised when she was arrested, but was shocked at her experience in jail.

"I knew it wasn't going to be a resort as it's jail. The conditions were awful. The first night we had mattresses, water, and the toilet was flushing. But on the next day everything started changing” Leuchanka said. “After we woke up, they took away our mattresses. Then they turned off the hot water and the toilet stopped working. Sleeping was tough because the bed was just a metal frame. We spread out newspapers and whatever clothes we had on top to cover the bed."

The 6-foot-5 Leuchanka said they didn't shower and went outside rarely and she also contracted fleas.

This was also in the height of the COVID-19 pandemic, but there was no social distancing or masks being worn. Leuchanka said the prison staff ignored their complaints.

After serving her 15 days in jail, Leuchanka was released, then arrested again. She was tried for participating in protests, but this time was fined and released. She finally was able to leave the country and headed to Greece.

Leuchanka said she was tested for the coronavirus after her release and the test came back negative. Unfortunately, she wasn't feeling well a few weeks later and got tested again and had contracted COVID-19.

“I went for a bath and smelled all the creams to make sure my smell was really gone. I was right, that is what happened. I didn’t panic, but felt weird,” Leuchanka wrote on social media. “I had another test in the morning and was confirmed to have COVID-19. Now I have no more temperature, but I can only feel a slight taste of the food, my nose is blocked, even though I can already breathe without any problem.”