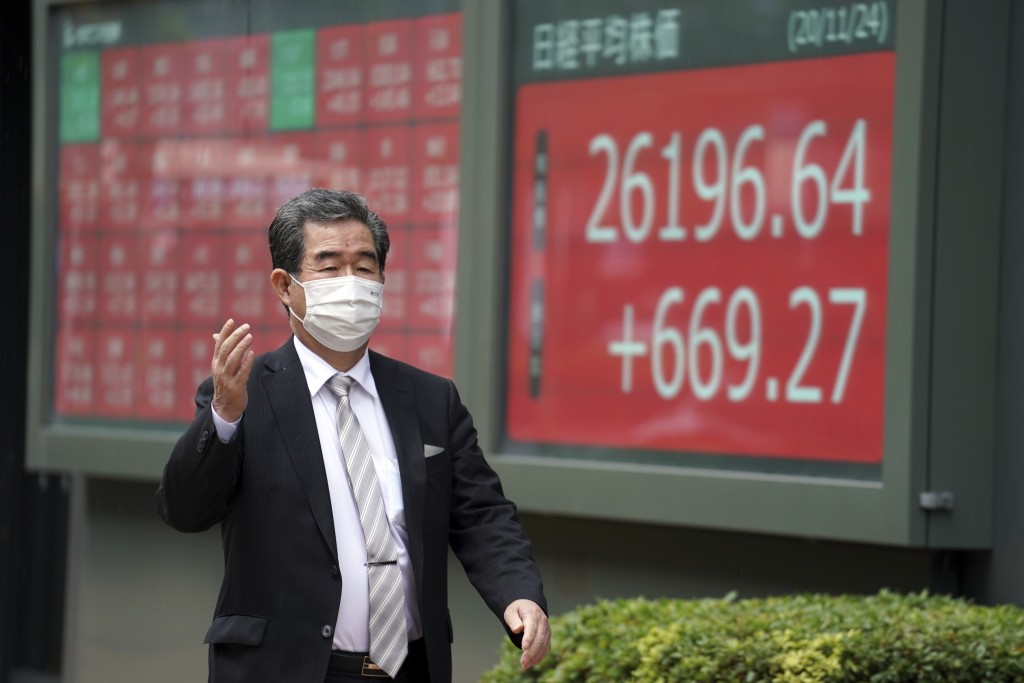 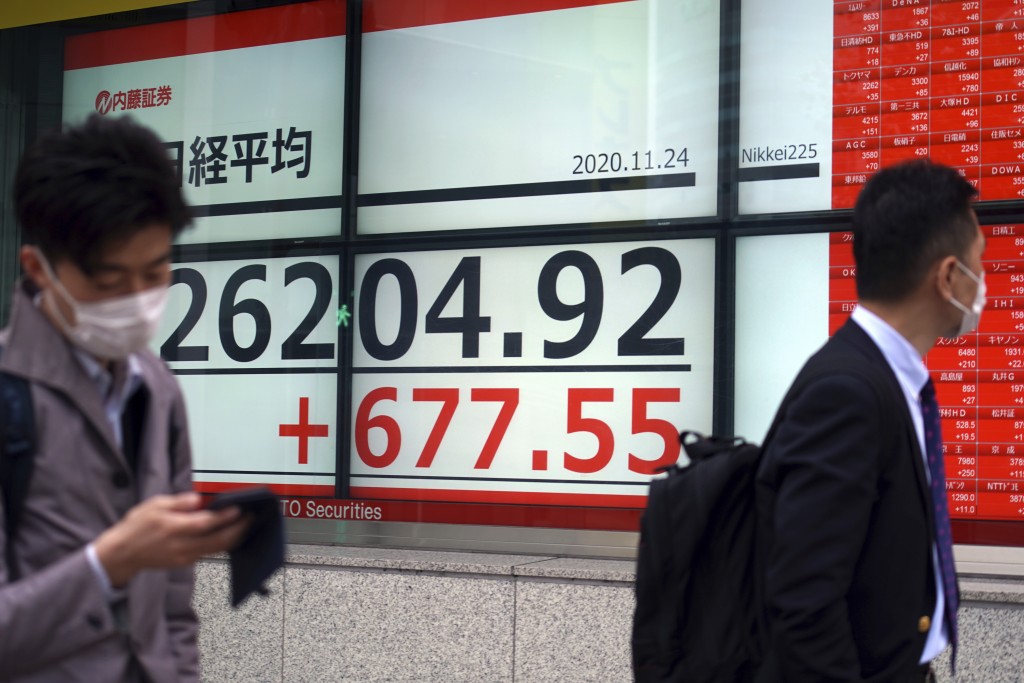 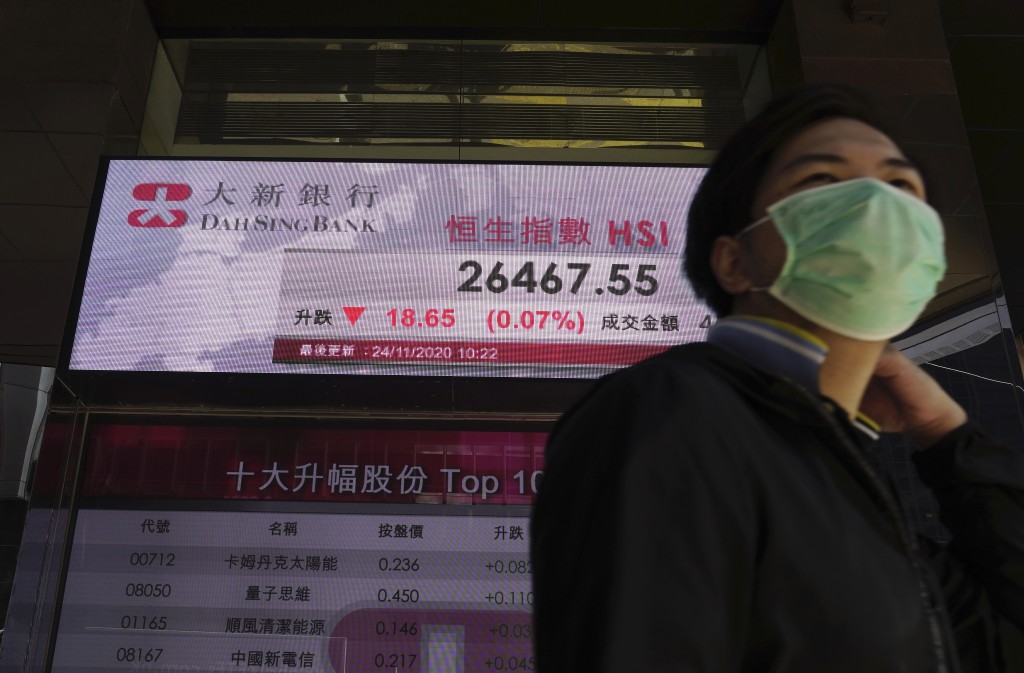 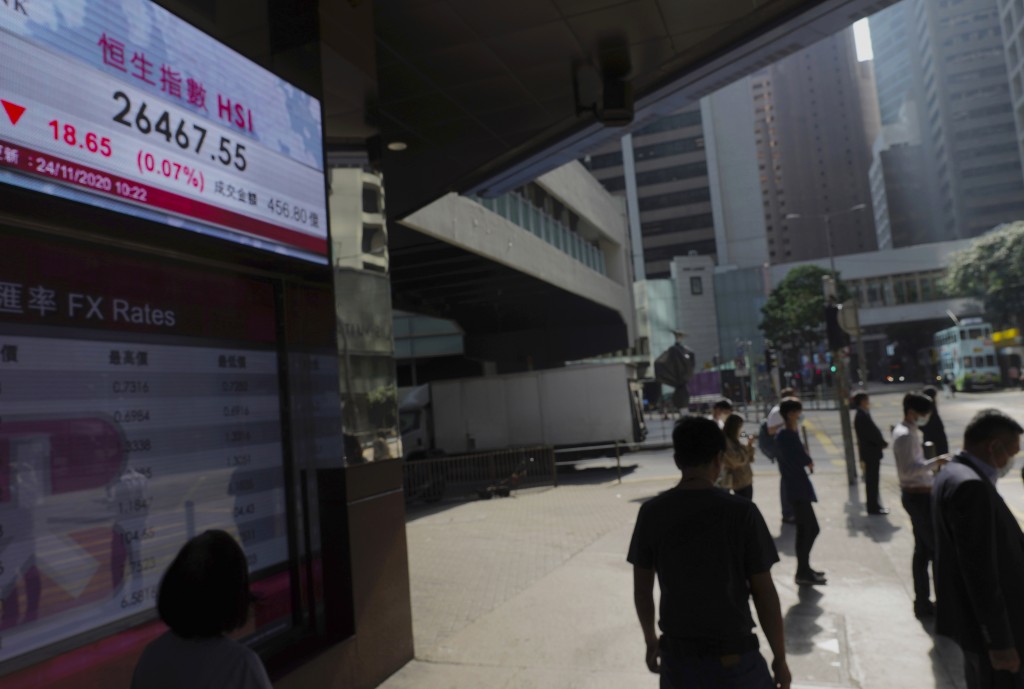 TOKYO (AP) — Asian shares were mostly higher Tuesday, encouraged by news on the development of coronavirus vaccines and more assurance for a transition of power in the U.S. to President-elect Joe Biden.

The U.S. federal government recognized Biden as the “apparent winner” of the Nov. 3 election, giving the green light for cooperation on a transition of power despite efforts by President Donald Trump to overturn the election.

Reports, including by The Associated Press, that Biden has chosen former Federal Reserve Chair Janet Yellen as treasury secretary added to investors' confidence. Widely admired in the financial world, Yellen would be the first woman to lead the department, in a line stretching back to Alexander Hamilton in 1789, taking on a pivotal role to help shape policies at a perilous time.

The latest vaccine developments are also helping to raise hopes that some normalcy will eventually be restored to everyday life and the economy. They're also tempering lingering concerns over rising virus cases in the U.S., as well as in Asia and other parts of the world, and new government restrictions on businesses aimed at limiting the spread.

“Investors continue to embrace and see the optimism in the development of vaccines, providing light at the end of the tunnel and multiple choices on how to get there,” said Adam Taback, chief investment officer for Wells Fargo Private Bank.

Even with its weekly decline last week, the S&P 500 is on track for a 9.4% gain this month. Trading is expected to be light on Wall Street this week ahead of the Thanksgiving holiday on Thursday, when U.S. stock markets will be closed. They will reopen on Friday for a half-day session.

AstraZeneca is the latest drug developer to report surprisingly good results from ongoing vaccine studies. It said the potential vaccine, which is being developed with partner Oxford University, was up to 90% effective. Unlike rival candidates, however, AstraZeneca’s doesn’t have to be stored at ultra-cold temperatures, making it easier to distribute.

Last week, Pfizer and Moderna both reported study results showing their vaccines were almost 95% effective. And, over the weekend, Regeneron Pharmaceuticals received U.S. government approval for emergency use of its COVID-19 treatment. The drug, which Trump received when he was sickened last month, is meant to try to prevent hospitalization and worsening disease from developing in patients with mild-to-moderate symptoms.

The string of upbeat news about vaccine development has been butting up against increased caution as the virus continues to threaten the economy. Energy companies notched among the biggest gains in the S&P 500 as the positive vaccine news stoked optimism about more demand for oil, sending the price of U.S. crude 2.2% higher Monday.