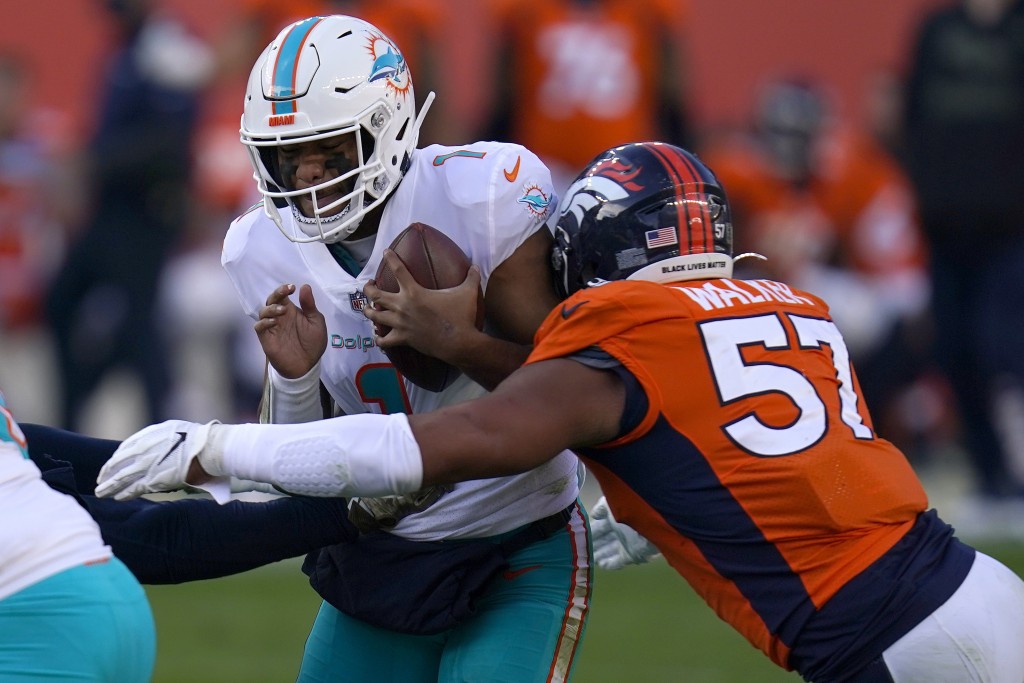 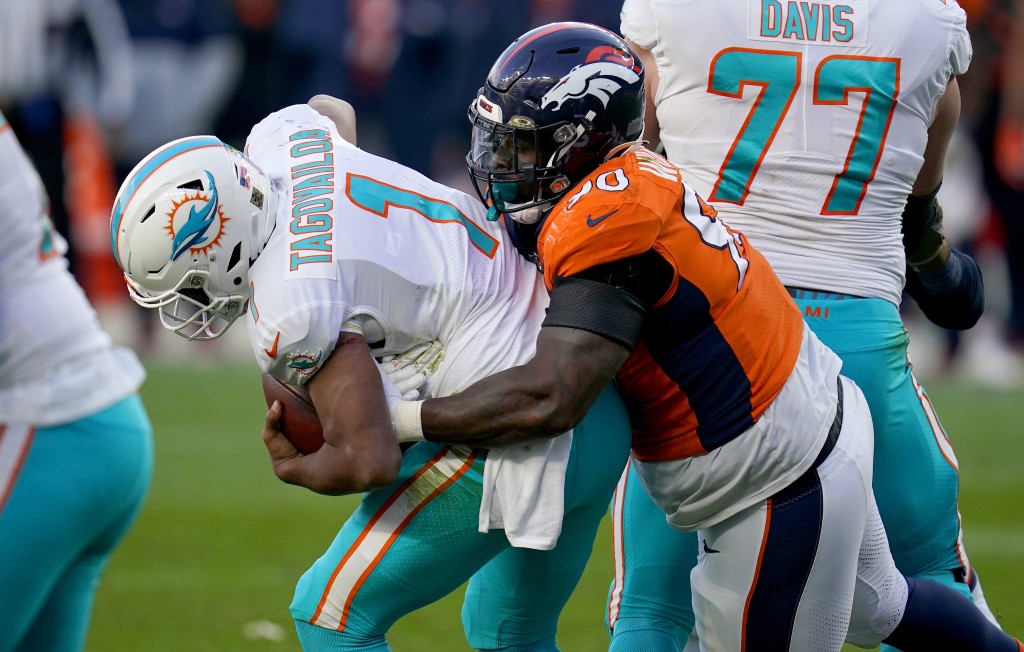 MIAMI (AP) — The masked man standing idly on the sideline in the final minutes of the Miami Dolphins' first loss since early October no longer looked so much like a surefire franchise quarterback.

Tua Tagovailoa's benching was temporary, but coach Brian Flores took him down a peg by replacing him with veteran Ryan Fitzpatrick in the fourth quarter of Miami's 20-13 loss at Denver.

“We all have to play better. He is not in this alone,” Flores said Monday. “He's the starting quarterback; he knows that. He’s a resilient kid. I expect him to bounce back. I expect our entire team to bounce back.”

Tagovailoa will rejoin the lineup Sunday against the New York Jets, his hold on the job no longer quite so firm.

The playoff prospects for the Dolphins (6-4) are also shakier. They missed a chance to pull even with AFC East leader Buffalo (7-3), and eight other AFC teams have at least six wins.

Flores again showed a willingness to make bold moves. His timing in awarding Tagovailoa the starting job was widely questioned but then lauded, and his decision to yank the rookie with 11 minutes left Sunday also invited second guessing.

“I'm always going to try to do what I feel is best for the team in a particular game,” Flores said. “That’s kind of how we felt Sunday. and that’s really it. We couldn't get into a rhythm. It became a two-score game. We felt like we needed a spark. We stuck Fitz in there.”

With Tagovailoa, the Dolphins netted exactly 100 yards. He was less accurate than in earlier games, looked uneasy in the pocket and conceded he sometimes held the ball too long, which is partly why he was sacked six times.

“I couldn’t get the ball in the hands of our playmakers and our guys consistently to get a rhythm going,” said Tagovailoa, who voiced no complaint about being benched.

Fitzpatrick tried to rally the Dolphins from a 20-10 deficit but threw an interception in the end zone on their final play. The veteran has been a willing mentor to Tagovailoa ever since draft in April, and said the Dolphins remain Tua's team.

“We’ve got a great chance here, and Tua has done a nice job,” Fitzpatrick said, “so it’s about putting it behind you and moving onto the next one. And I know that he’ll do a good job of that.”

The Dolphins' formula during the winning streak was to take an early lead and then dial up the pressure with blitzes to force turnovers. At Denver, they fell behind and couldn't stop the run, allowing 189 yards on the ground.

For the season the Dolphins' run defense is giving up 134 yards per game and 4.8 per carry, both among the worst in the NFL.

"We’re definitely not doing a good enough job," linebacker Andrew Van Ginkel said, "and we got to work on it to fix it.”

Cornerback Xavien Howard set up the Dolphins' lone touchdown with his sixth interception, tied for most in the NFL. He also ranks among the league leaders with 12 passes defended.

Rookie guard Solomon Kindley left Sunday's game when he aggravated a foot injury. Running back Salvon Ahmed was sidelined with a shoulder injury but later returned.

720 — That's how badly Miami has been outgained in yards this year, including 459-223 on Sunday. However, thanks largely to takeaways and special teams, it has outscored opponents by 62 points, seventh best in the league.

Miami's next two opponents, the Jets and Cincinnati, are a combined 2-17-1. The Dolphins are a touchdown favorite at the winless Jets, but since 2017 Miami has lost 10 consecutive road games against teams with losing records.