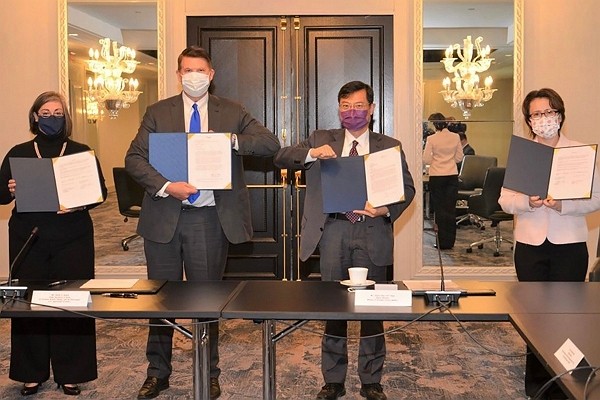 TAIPEI (Taiwan News) — Taiwan and the U.S. conducted their first Economic Prosperity Partnership Dialogue in Washington D.C. on Friday (Nov. 20), which saw the signing of a memorandum of understanding (MOU) aimed to strengthen economic ties.

The trade talks, which were held in the face of increasing Chinese pressure, are expected to boost future economic collaboration. They took place both virtually and in person, with Taiwan's Vice Minister of Economic Affairs Chen Chern-chyi (陳正祺) leading a delegation to Washington to meet with U.S. Undersecretary of State Keith Krach.

According to the Taipei Economic and Cultural Representative Office in the U.S. (TECRO), the MOU was inked by Taiwan's de facto ambassador to the U.S. Hsiao Bi-khim (蕭美琴) and American Institute in Taiwan Managing Director Ingrid Larson during the opening ceremony. It was witnessed by Taiwanese Economic Minister Wang Mei-hua (王美花) and Minister without Portfolio John Deng (鄧振中), who participated from Taipei via videoconferencing.

TECRO said the move was to establish an "institutionalized dialogue mechanism" between the two countries. It added that both sides will discuss the topics of infrastructure development, supply chains, investment screening, clean 5G, women's rights, and global health security in the upcoming sessions.