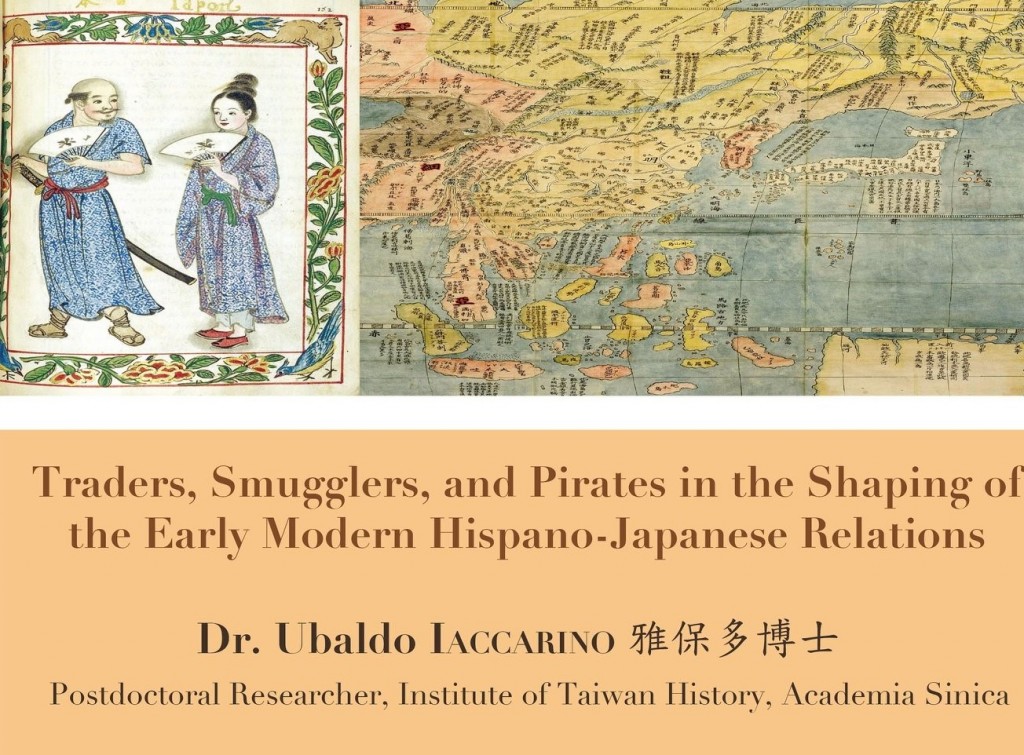 In his presentation, titled “Traders, Smugglers, and Pirates in the shaping of the Early Modern Hispano-Japanese relations,” Iaccarino explained the dynamics of regional trade development and its impact on relations between Spain (via the Philippines) and Japan.

When the Spanish arrived in the Philippines in 1564, they were not interested in interacting with the Japanese, focusing instead on securing control over the Philippines and vying for dominance in the spice trade, Iaccarino explained.

Though both Japanese and Chinese merchants were already trading with the Filipinos, it was not until the 1580s that the Spanish developed an interest in Japan. Iaccarino pointed out that relations between the two lands were the result of Japanese traders’ interactions with Christian missionaries.

In Japan, there were three major orders of missionaries: the Franciscans, Augustinians, and Dominicans. Christianity became such an influential force on regional trade that merchants sometimes assumed Christian identities to facilitate trade and receive favors from the Spanish authorities.

“Becoming a Christian in Manila, Macao, and Nagasaki was the best way to establish mutual trust with the [Spanish] and build collaborative relationships,” Iaccarino stated. Through this trust, “friendships” were established between powerful lords based on the Japanese island of Kyushu island, many of whom converted to Christianity, and the Spanish authorities in present-day Manila.

According to Iaccarino, another vital concept that strengthened relations between the Spanish and Japanese was the offering of tributes. Gómez Pérez Dasmariñas, the seventh Spanish governor-general of the Philippines in two letters to Japanese Shogun Toyotomi Hideyoshi declared that he wanted a “real friendship and alliance.” Hideyoshi responded by demanding tribute, and Spanish friars in 1593 contributed 1,000 pesos to be gifted to Hideyoshi. A friar based in Nagasaki, Jerónimo de Jesús wrote in 1595 that it was important to maintain this friendship with gifts from (Manila).

Such friendships, Iaccarino stated, improved bilateral trade relations, increase the number of missionaries in Japan, and established a military “alliance” between Spanish Manila and the Christian Kyushu lords. From the 1580s on, there were many diplomatic exchanges between the two sides, including a letter that feudal lord Matsura Shigenobu sent to Manila in 1585 supposedly declaring his desire to become a vassal of Spanish King Philip II.

An envoy was dispatched in 1586 by Santiago de Vera, the sixth Spanish governor of the Philippines, to establish relations with Lord Omura Sumitada, who famously opened the port of Nagasaki to foreign trade, and other Christian lords. Relations became so robust that Spain’s proposed plan to conquer China in the late 1580s involved 6,000 Japanese soldiers provided by the Christian Kyushu lords, Iaccarino remarked.

As these friendships grew, trade routes quickly formed what is known as the Luzon trade network according to the changing patterns of the Asian market. This market was affected in part by the emergence of an economy based on silver, which Japan had an abundance of.

The shifting landscape of regional trade was also a result of the end of China’s tally trade system, which involved the exchange of Japanese and Chinese goods, and the implementation of its Haijin (海禁) policy countermeasures against piracy.

Goods such as pangolin scales, gold, cotton, deerskin, turtle shells, pearls, porcelain, copper, and iron were traded among Japan, China, and the Philippines. Deerskin was brought back to Japan in large quantities to make samurai armor and sword accessories; copper was used to produce cannons; and iron was used in shipbuilding across the region.

By the turn of the century, Hispano-Japanese relations expanded into anti-piracy cooperation, which had become a priority for both governments. Beginning in the late 1590s, armed Japanese merchant ships bound for the Philippines and other Southeast Asian destinations were authorized with letters stamped with an official red seal.

This system helped suppress regional piracy, control trade activities in Kyushu, and centralize Japanese trade abroad, Iaccarino said. In November of 1601, a Japanese lord wrote to the governor of the Philippines that sailing between the two countries had become secure.

While Iaccarino’s account of 16th Hispano-Japanese relations details important ongoing regional developments at the time, it also gives a helpful context as to why and how Spain later expanded its influence to Formosa (present-day Taiwan).

Relations with Japan greatly helped Spain solidify its control over the Philippines and establish itself as a major player in the spice trade — much to the dismay of the Dutch, who had established a foothold in modern-day Indonesia and were vying with Spain for control of regional trade.

After attempts to expel the Spanish from Manila failed, the Dutch later set up in Formosa. The Netherlands established a colony in present-day Tainan, where it constructed Fort Zeelandia in 1624 and Fort Provintia in 1653. This was a strategic move to continue contesting the Spanish influence on Asian trade.

As a countermeasure, Spain established Fort San Salvador on today’s Heping Island in 1626 and Fort San Domingo in Tamsui in 1629. The Dutch eventually took over the Tamsui fortification in 1642 and subsequently captured Fort San Salvador, effectively ending Spain’s 16-year presence in Taiwan.