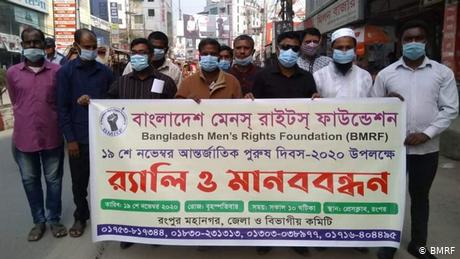 29-year-old Majed Evena Azad works for a private company in Dhaka, the capital of Bangladesh. He claims that his wife had mentally tortured him for years, but he couldn't get any help as the society he lives in does not even believe that a woman can torture a man.

"She acted as if she loved me and we got married at a court following her wishes," Azad told DW, adding: "But, after a few days of getting married, she started taking lots of money from me while showing no interest in having a conjugal life with me."

"I had met her financial demands for a few years. But, at some point, I discovered that she has relationships with some other men like me, and we all were her prey," Azad said.

Azad's wife filed a case against him, under the country's Digital Security Act, after he stopped fulfilling her financial demands. He had to stay in hiding for over a year to avoid arrest, but recently a court ruled that the case against him was fabricated.

"I had to go through tremendous psychological torture by her. Nobody believed me when I tried to get support from others. Our laws are women-friendly and can easily be used to harass a man," he added.

From victim to activist

After going through this experience, Majed Evena Azad decided to change the situation by raising his voice in support of other men who face domestic abuse like him. This kind of mental torture, in his view, is sometimes more difficult to bear than physical abuse.

"I joined an organization named Bangladesh Men's Rights Foundation (BMRF) one day and started to organize events to raise awareness on domestic abuse where men are victims. I am secretary of the organization now," Azad said.

BMRF, which was founded in 2016, has published a survey that showed around 80% of married men in Bangladesh have faced mental abuse by their spouses.

It's, however, unclear how representative of Bangladeshi society the study is as it was just based on messages and phone calls the organization received from men seeking help.

"We have got thousands of messages from men who have been abused mentally and physically by their spouses and their relatives. But they are afraid to talk or seek legal help about it as our society regards a man as a weak person when he admits such a thing. They laugh at male victims," Azad said.

Read more: 'We need to talk about religion and patriarchy': Bangladeshi activist

Sheikh Khairul Alam, the founder and president of the organization, believes that the issue of men as victims of domestic abuse needs to be addressed nationwide.

"We need laws to ensure justice for male victims. Our organization has been campaigning for it," he told DW.

While there are no official statistics on the exact number of domestic abuse cases where men are victims, experts say the problem demands the government's attention. The Muslim-majority South Asian country has strict laws to protect women and children from domestic violence and sexual abuse, but no such legislation is available to protect the rights of men.

Men are often seen as perpetrators of such crimes, not as victims.

Indeed, according to the Bangladesh Mahila Parishad, an organization that monitors violence against women, at least 4,622 women were subjected to domestic violence in the country in 2019.

"Men are mainly the perpetrators of domestic violence in our society. However, they could be victims as well in different circumstances," Sanzida Akhter, chairperson of the department of women and gender studies at Dhaka University, told DW.

"We haven't seen any specific research or statistics on the length of domestic violence against men in the country. There could be other reasons for such abuse apart from the fact that they are male," Akhter added.

Could gender-neutral laws be a solution?

Ishrat Hasan, a lawyer and human rights activist based in Dhaka, believes that special laws have been enacted in Bangladesh over the past few decades to protect women from domestic violence.

"However, with changing times, we've noticed that men are also becoming victims of domestic violence," she told DW.

Miti Sanjana, a lawyer practicing in the Supreme Court of Bangladesh, has also noticed a rise in domestic violence cases where men are victims. She argues for gender-neutral laws to address the issue.

Read more: Men as victims of domestic violence: 'I was paralyzed'

"Due to stereotyped gender roles and misogynistic mindsets in Bangladesh, it is hardly believed by society that a woman can inflict violence on man," she told DW. "However, during my interactions as a lawyer with many male clients on family law matters, I have observed that men also suffer from domestic violence," she added.

"There is a growing number of men who are facing physical, emotional abuse, and blackmail by their wives. But this is not being addressed adequately," the lawyer said.

Both Sanjana and Hasan share the view that Bangladesh needs to amend its domestic violence laws to protect male victims.

"In Bangladesh, the Domestic Violence (Prevention and Protection) Act, 2010, specially deals with domestic violence against women and children. I think this law can be amended by inserting a special provision regarding violence against men," Hasan said.

Speak out against the problem

Observers say that men must come forward to speak out about the domestic abuse and violence they face. There's not much to do if they don't report their cases and seek legal support.

"We need to realize that due to the socioeconomic changes domestic violence is not limited to women only. Men also are abused verbally, physically, emotionally, psychologically, and sexually. This abusive behavior should be reported," Miti Sanjana underlined.

"Every victim must get justice for their pitiable condition in the family and society, irrespective of gender," she stressed.

Meanwhile, Ishrat Hasan wants media to raise awareness about the issue of men as victims of domestic abuse and violence.

"As domestic violence against men is comparatively a new concept in Bangladesh, it should be outreached in different electronic and print media to raise awareness,'' she said, adding: "People should also be made aware of the available legal remedies for ensuring justice and protecting the rights of men."