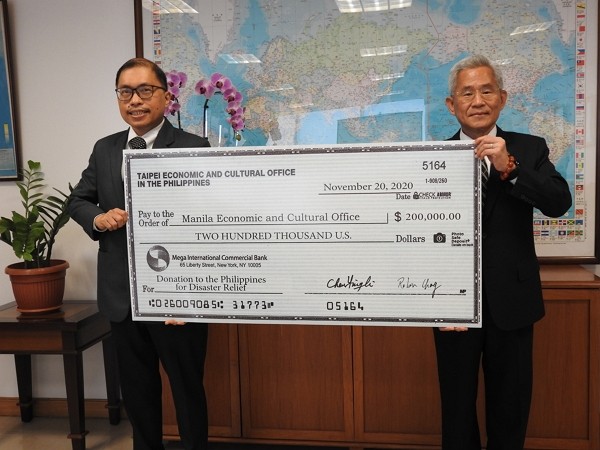 The Manila Economic and Cultural Office in Taipei (MECO) thanked Taiwan on Friday (Nov. 20) for donating US$200,000 to disaster relief efforts in the Philippines, as the country works to rebuild from the damage caused by three major typhoons in recent weeks.

Since October, the Philippines has been hit in succession by typhoons Molave, Goni and Vamco, which have resulted in the deaths of at least 125 people and left hundreds of thousands homeless, according to the country's National Disaster Risk Reduction and Management Council.

On Friday, Taiwan representative to the Philippines Michael Hsu (徐佩勇) presented MECO with a donation of US$200,000 to go toward humanitarian relief efforts.

The gift was coordinated with the business group Taiwan Association Philippines (TAP), which made a separate donation of PHP70,000 (US$14,504) to those affected by the storms.

Expressing gratitude for the donations, MECO Deputy Resident Representative Gilberto F. Lauengco told CNA that "every time" the Philippines is hit by a natural disaster, Taiwan's public and private sectors have stepped up to provide generous assistance.

In Taipei, he said, multiple civic groups have organized efforts in recent week to donate money, food, and clothing to victims of the typhoons.
"We are extremely grateful to Taiwan's government and people, who never hesitate to offer a helping hand in the aftermath of such disasters," Lauengco said.

Meanwhile, TAP Chairwoman Huang Ya-hui (黃雅惠) said her group was planning an additional donation for residents of Marikina City, which had suffered major damage in the storms.

"Other places also need help, and we're looking to see what we can do for them," she said.

Hsu pointed out that he had held three diplomatic postings in the Philippines and had never seen such extensive typhoon damage.

He noted that Taiwan's President Tsai Ing-wen (蔡英文) had sent her thoughts to the country and promised to provide assistance in a Twitter post last week.