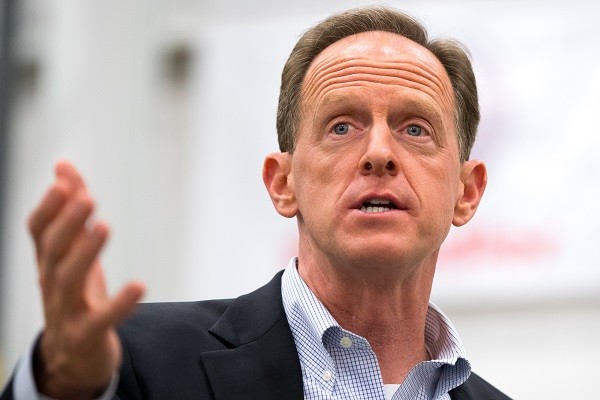 TAIPEI (Taiwan News) — U.S. Senator Pat Toomey (R-PA) on Wednesday (Nov. 18) said that this week he would introduce a resolution in the Senate to support a free trade agreement (FTA) between the U.S. and Taiwan, and he also called on the U.S. to formally host President Tsai Ing-wen (蔡英文).

On Wednesday, Washington think tank The Heritage Foundation held an online discussion titled U.S.-Taiwan Partnership in Challenging Times. During the event, Toomey said Taiwan is on the front lines of the Chinese Communist Party's (CCP) belligerence and in the "crosshairs of the CCP's sights."

Toomey pointed out that Chinese Chairman Xi Jinping (習近平) has repeatedly stated that Taiwan "must and will be reunited with the Mainland." He described Taiwan as a democratic, market-based economy and free society that is "at the doorstep of the Chinese Communist Party dedicated to destroying those principles."

He emphasized that the threat posed by the CCP is why "deepening support for Taiwan is so important to the United States." To counter this threat, Toomey suggested the U.S. increase diplomatic support for Taiwan, push back against China's efforts to exclude Taiwan from international organizations, and establish regular bilateral exchanges in higher levels of government.

The senator cited the visit by Health and Human Services Secretary Alex Azar to Taiwan in August as a good example. He then called on Washington to raise the bar higher by formally inviting President Tsai.

Regarding the military aspect of the relationship, Toomey said that the U.S. should continue weapons sales designed to strengthen Taiwan's asymmetric defense strategy, include Taiwanese forces in military exercises with the U.S. and allies, and upgrade the status of the American defense attaché stationed in Taiwan to the rank of general or flag officer.

Toomey said that the U.S. should also step up economic relations with Taiwan, especially in terms of trade. He announced that he intends to introduce a resolution in the Senate this week in support of a U.S.-Taiwan FTA.

When asked about the likelihood of such an FTA being passed in the next two years, Toomey acknowledged that the Trump administration has been "skeptical about free trade" but pointed out that "Joe Biden has a history of supporting some of these broader free-trade agreements, so I think that is encouraging."

He stated that "I intend to push the new administration in this direction."

He said another factor that could give momentum to the free-trade camp is that an FTA would be an "important geopolitical strengthening, a way to check China's ambition, a way we can establish the rules of the road for international commerce that's consistent with what we believe is right."