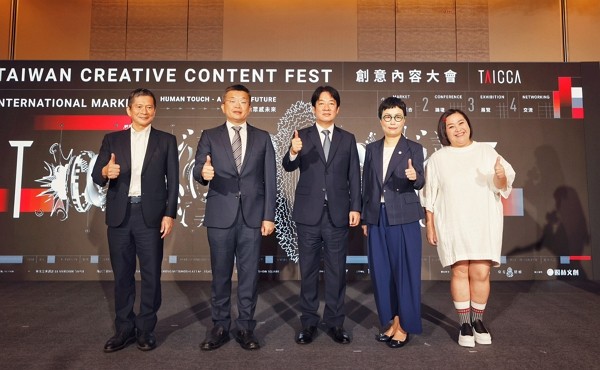 As Taiwan heralded its first interdisciplinary art event, government officials and local creative artists gathered at Le Meridien Taipei Wednesday morning to witness the occasion. A total of 75 film and television production companies and 84 publishing firms were also in attendance.

During his speech, Lai expressed confidence that Taiwanese creators will continue to have a strong presence in the global content industry. He said the creative endeavors and soft power of local industries have united Taiwanese, calling them the "roots" of the country.

Lai said Taiwan has both the talent and the funding to share its stories with the world. Local artists will stand out in the international arena by incorporating Taiwanese elements into their creations, Radio Taiwan International cited him as saying.

Presented by the Taiwan Creative Content Agency (TAICCA), the TCCF is dedicated to local cultural content as a whole and provides a hybrid platform for content development, venture capital matchmaking, and international co-productions. It also serves as a marketplace to promote Taiwanese creativity in the form of novels, games, TV shows, manga, and film and animation.

The physical form of the TCCF will run until Nov. 22 in Taipei, with 2,000 participants expected to take part. More than 274 buyers from 22 countries, including representatives from Netflix, Fox, HBO, and the American Producers Guild, have also registered to attend the event virtually, according to UDN.