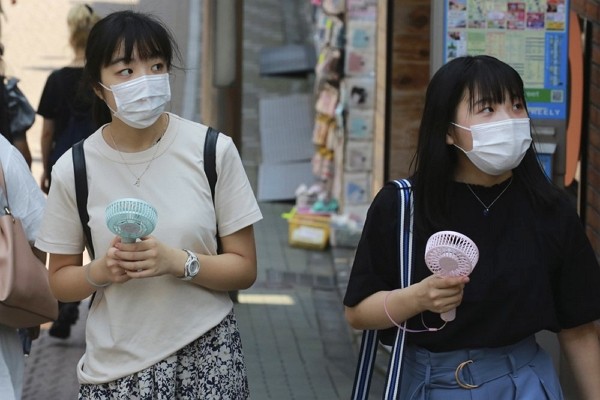 South Korea tightened social distancing rules and Tokyo said officials would meet on Thursday to discuss if the city needs to raise its infection alert to the highest level.

“We’re in a crisis where there are pessimistic views that predict another nationwide transmission,” South Korea’s Vice Health Minister Kang Do-tae told a meeting.

In Australia, a state imposed a six-week lockdown after a new outbreak in Adelaide expanded to 22 cases, restricting people from leaving their homes, mandating masks, closing schools, factories and takeaway food, and banning funerals and weddings.

The South Australia state government warned the strain of virus detected in the new cases was highly contagious with a 24-hour infection rate.

“We are going hard and we are going early. Time is of the essence and we must act swiftly and decisively,” South Australia state Premier Steven Marshall said.

“We have one chance, one chance, and will be throwing all our resources at it because we know the consequences of getting it wrong,” Marshall said.

A resurgence in Asia could hamper prospects for a broader reopening needed to boost economic recovery, stymie “travel bubble” plans, and fan public worries in Japan which is preparing to host the Olympic games next year.

“Infections are now occurring simultaneously in every corner of our society, real life situations, unlike the past when there were large outbreaks from a specific place or group,” Kang said.

From Thursday, the country will ban public gatherings of 100 people or more, limit religious services and audiences at sporting events to 30% capacity, and require high-risk facilities including clubs and karaoke bars to broaden distance among guests.

In Tokyo, new daily cases hit a record 493. The Nikkei business daily reported the Tokyo government was considering raising its infection alert to the highest of four levels as early as Thursday.

“A monitoring meeting of the Tokyo Metropolitan Government last week recognised that this was the beginning of a rapid spread of infection, a serious situation requiring extreme vigilance,” he said.

Fresh cases in India rose to 38,617, though infections have slowed from a September peak, but cases are rising in the capital New Delhi, a city of 20 million where crowds thronged markets for last week’s Diwali festival.

Officials in the city are drawing up plans to reinstate some curbs, such as lockdowns of some markets, and are seeking federal approval to further cut the number of guests at large events such as weddings.

Taiwan, which reported two new cases on Wednesday, both imported, also announced new measures. The country will mandate greater use of masks and require almost all people entering the island to have a negative COVID test.