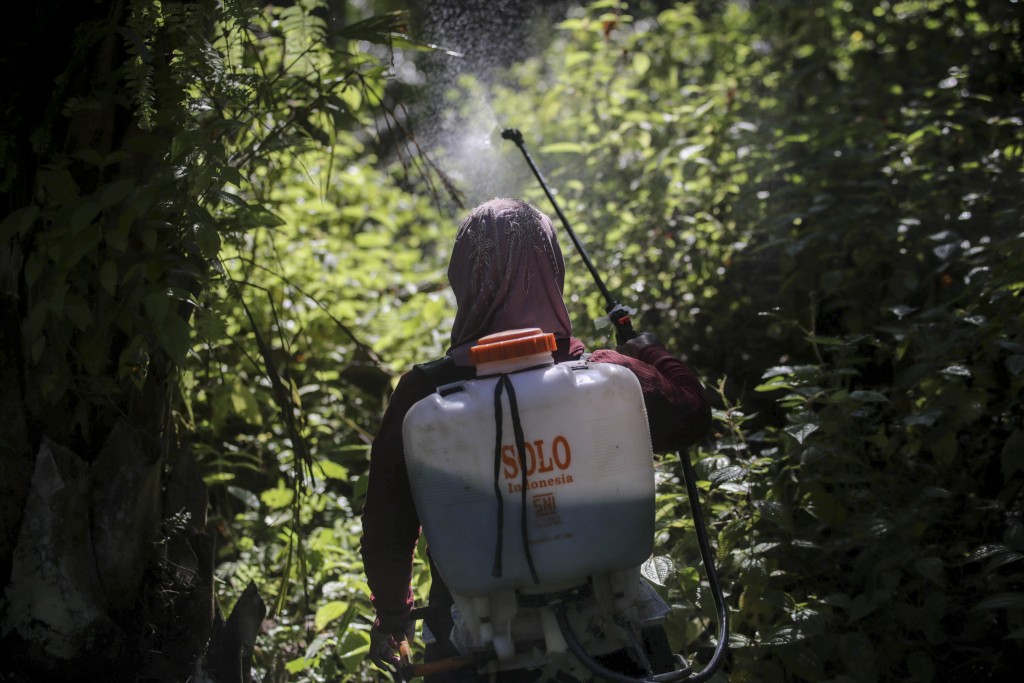 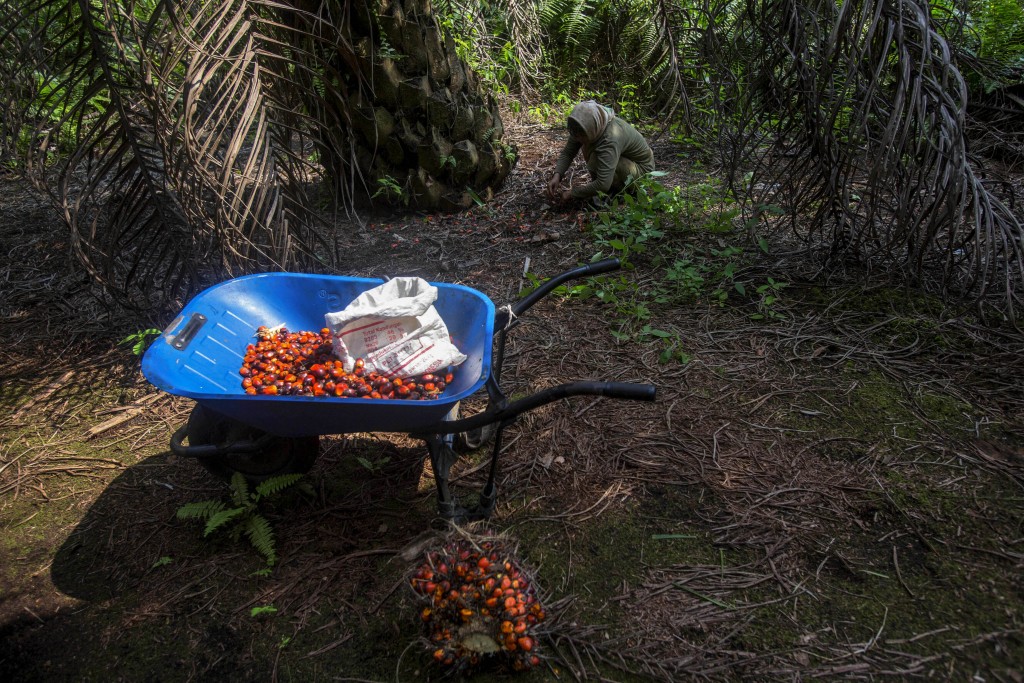 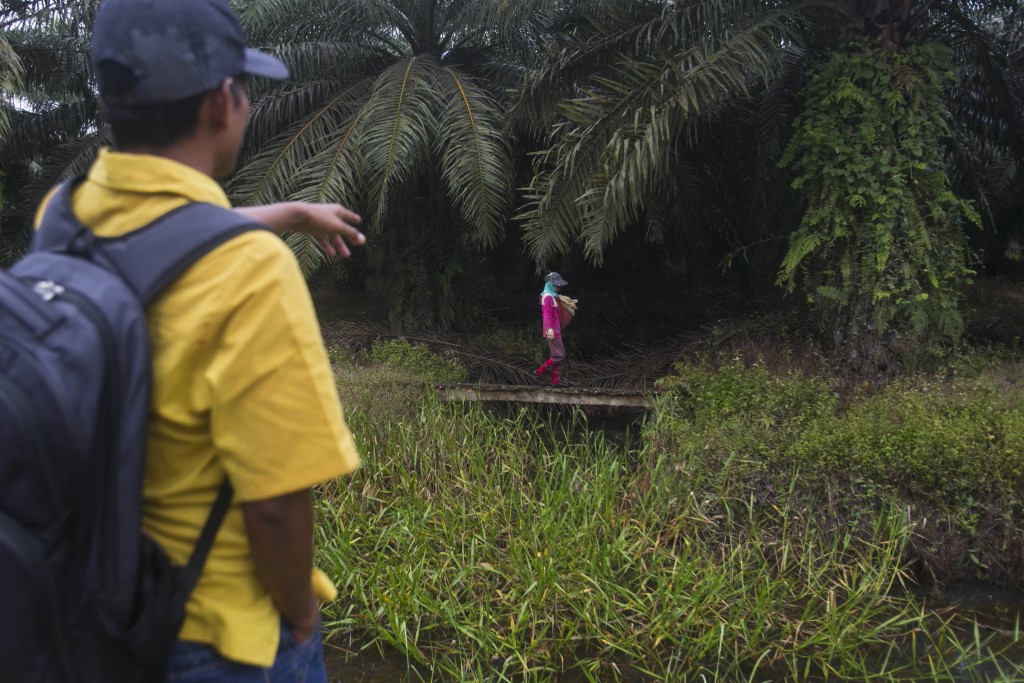 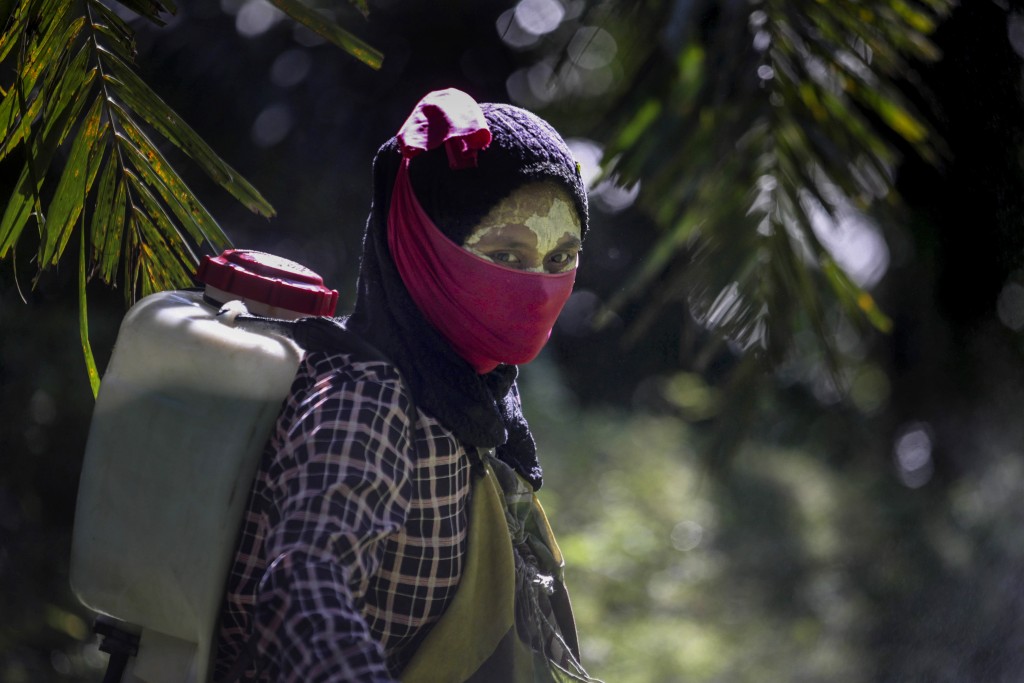 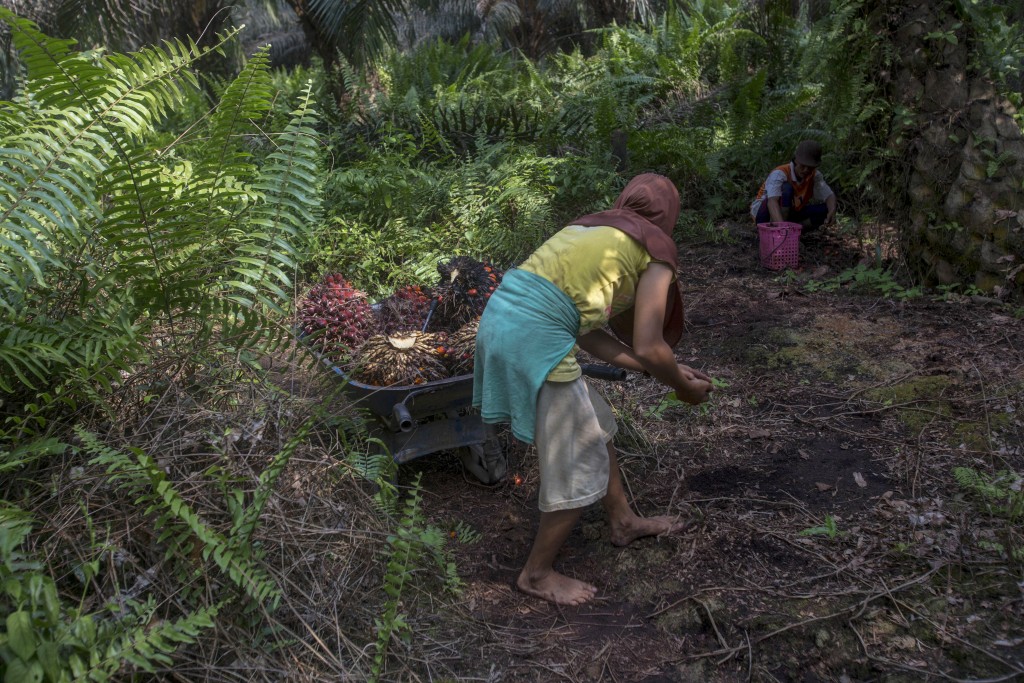 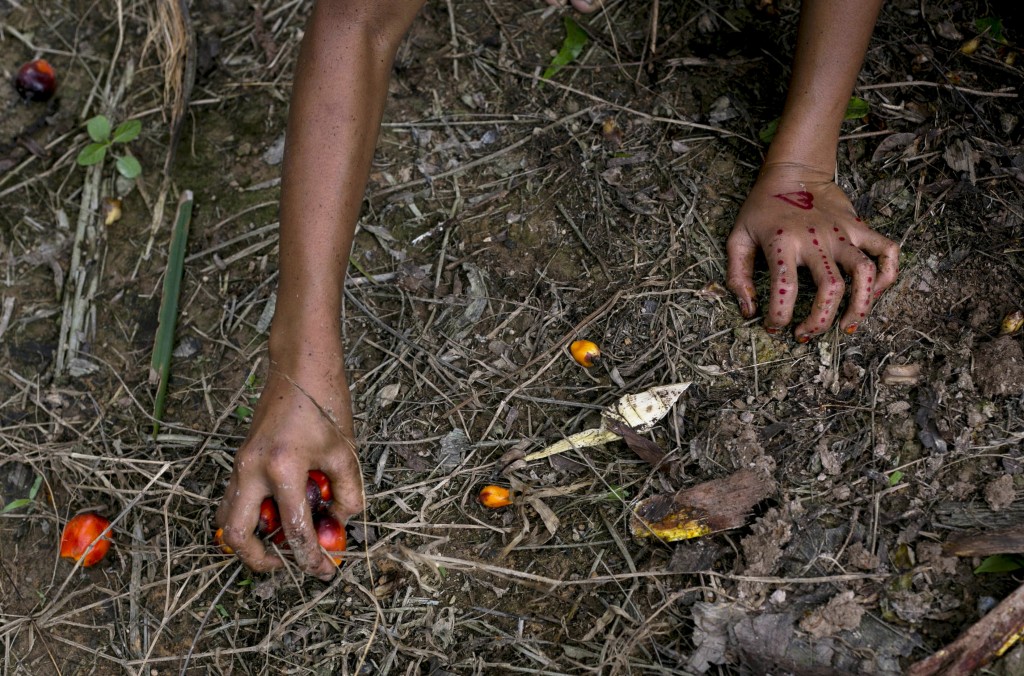 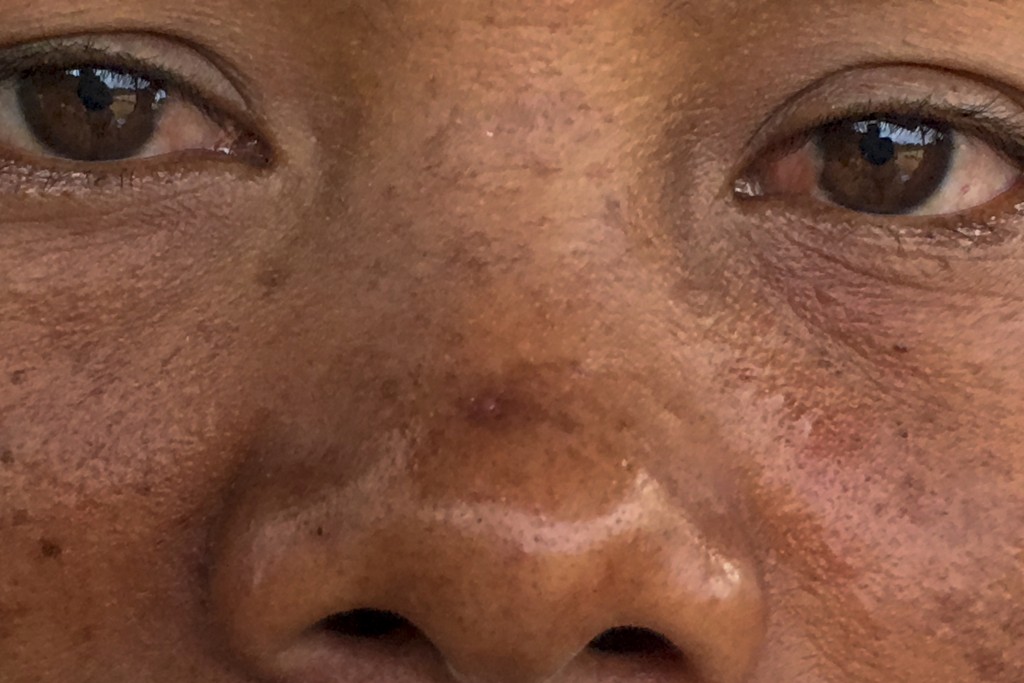 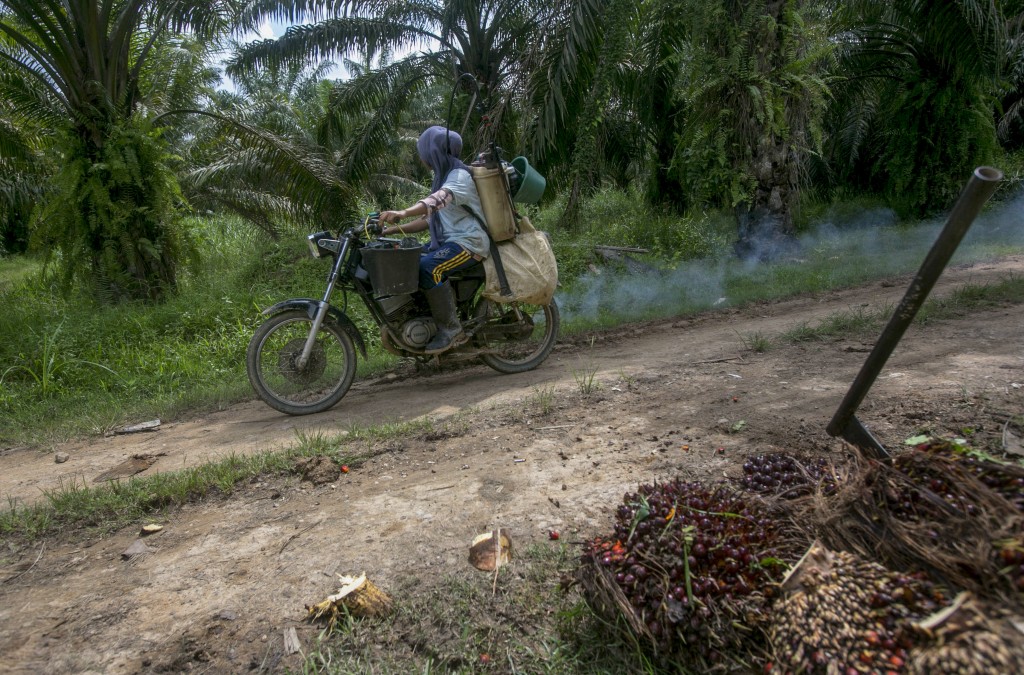 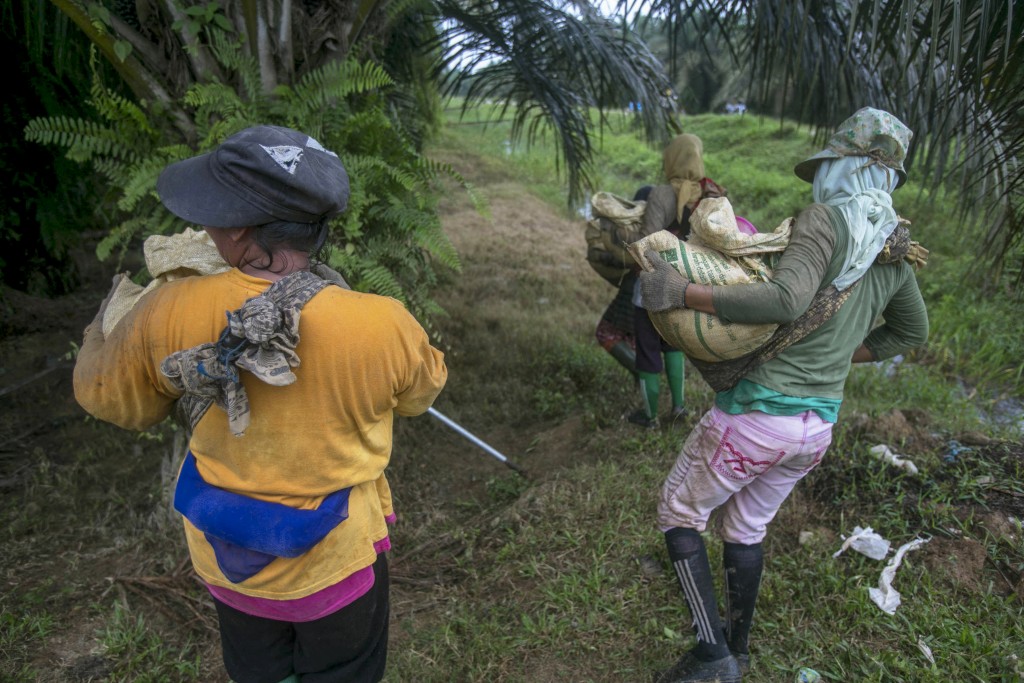 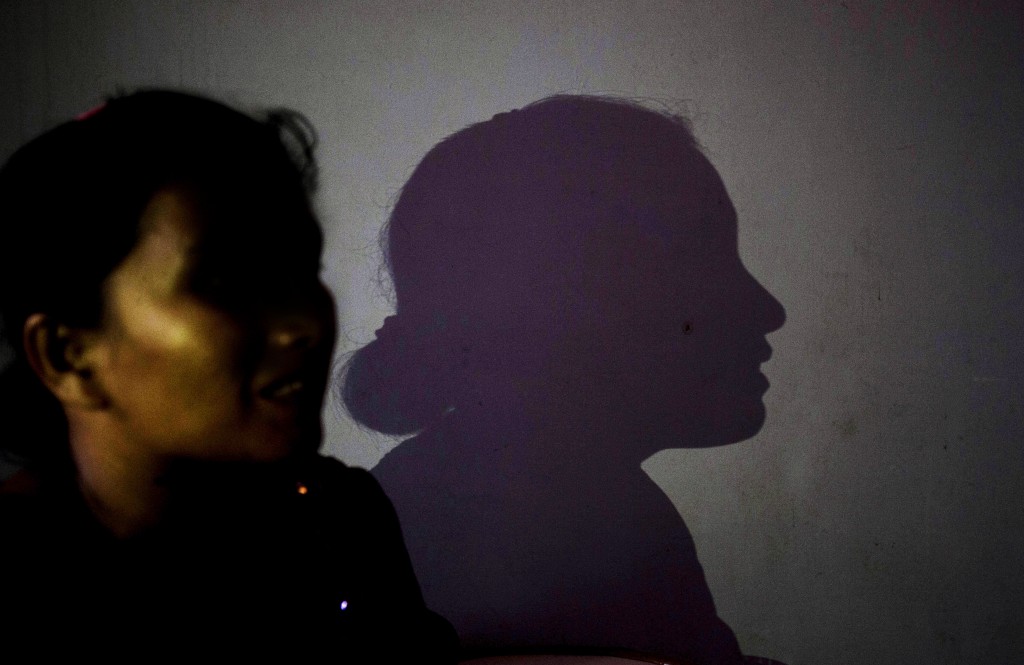 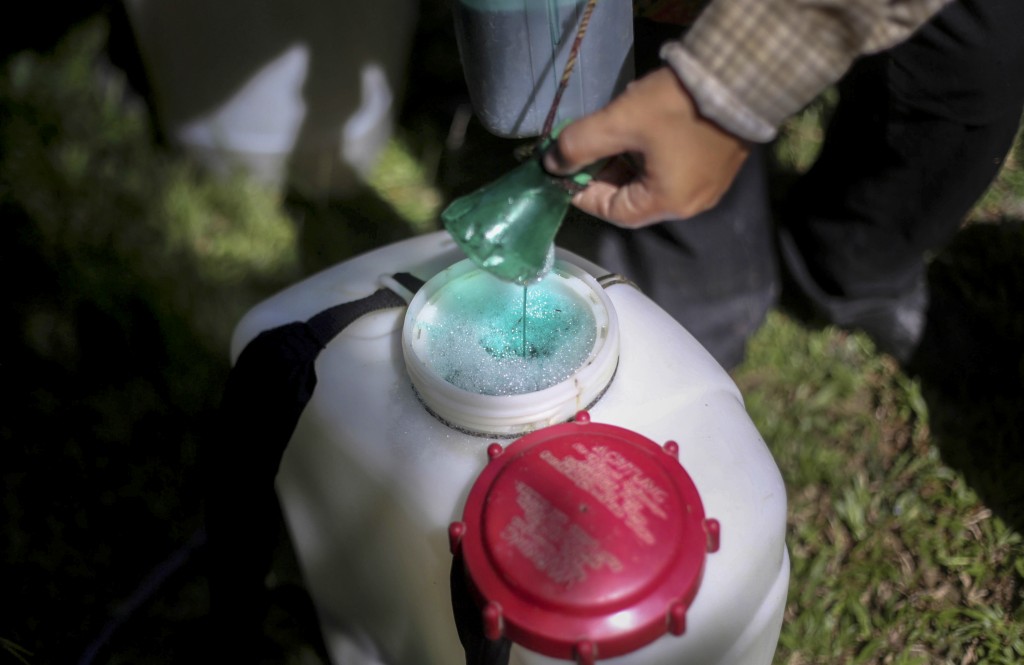 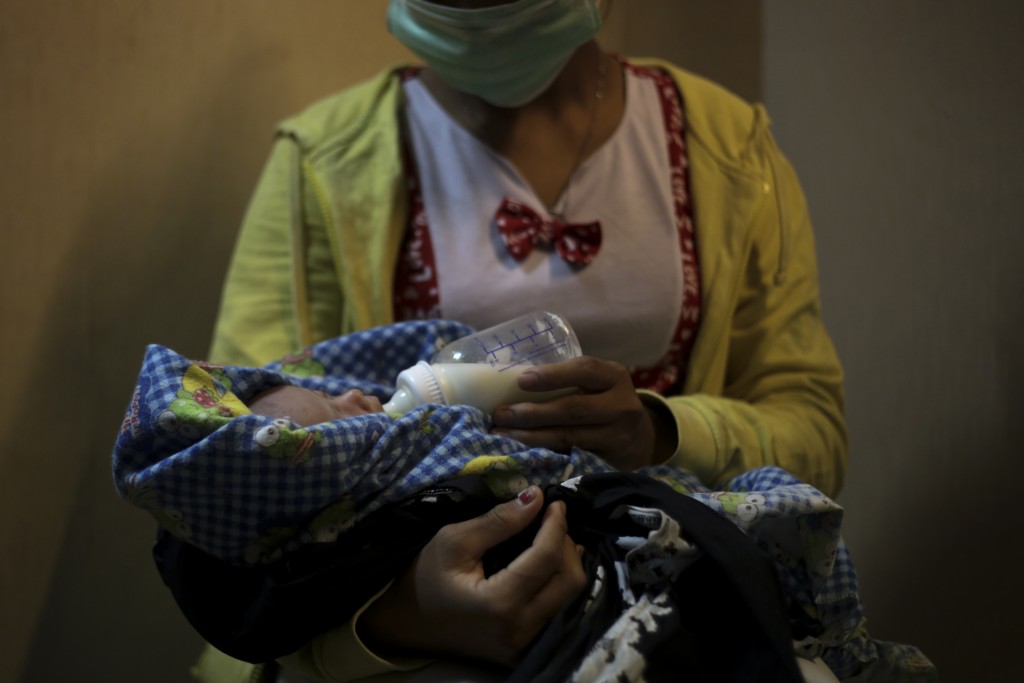 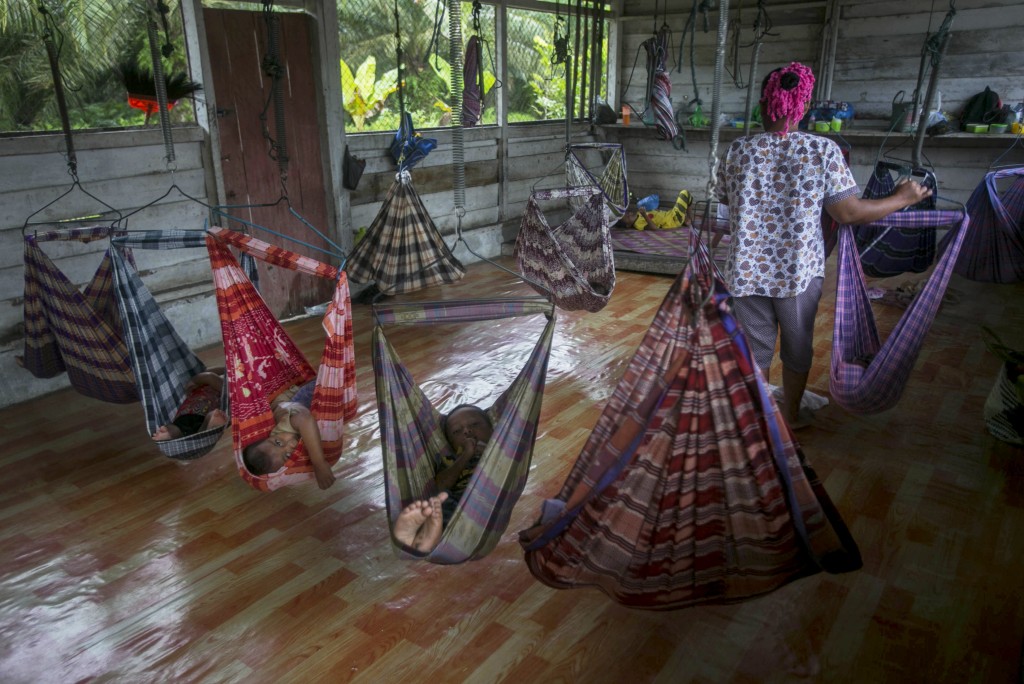 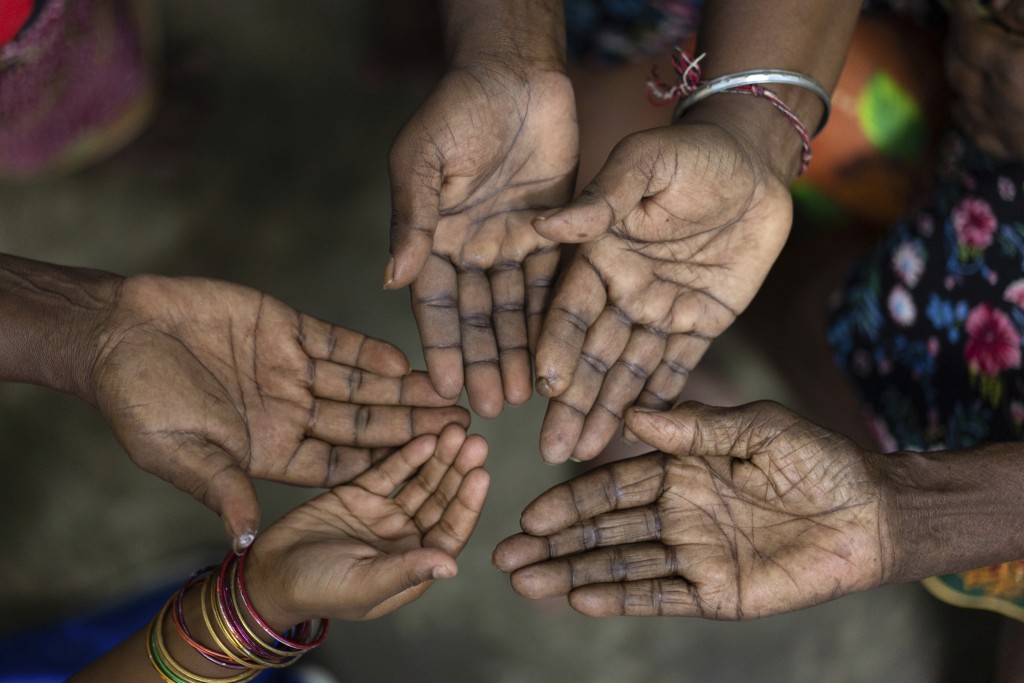 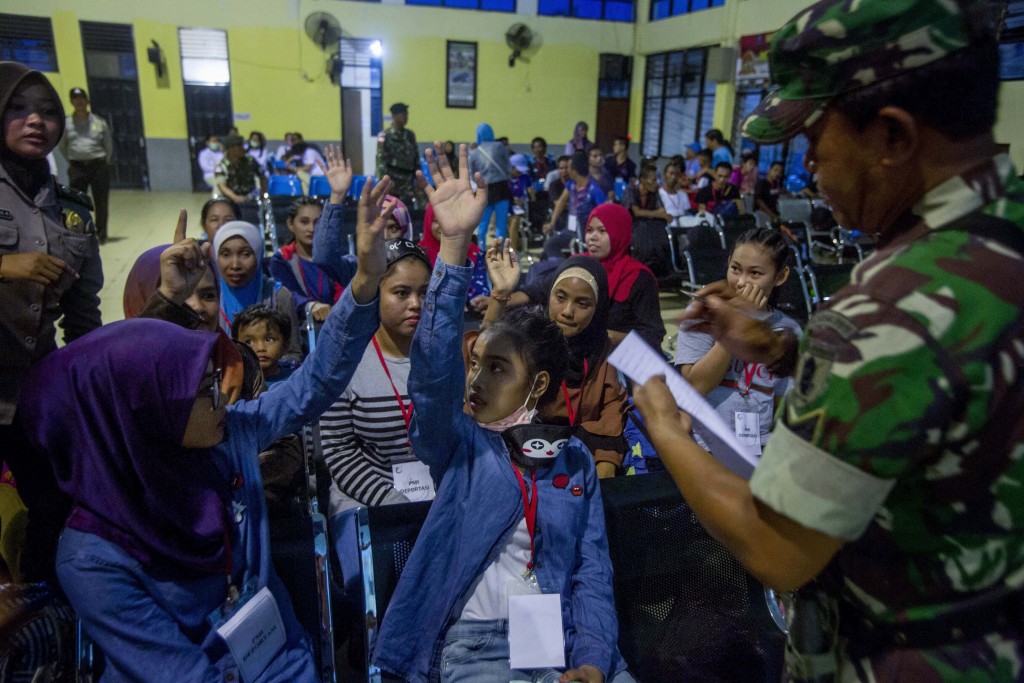 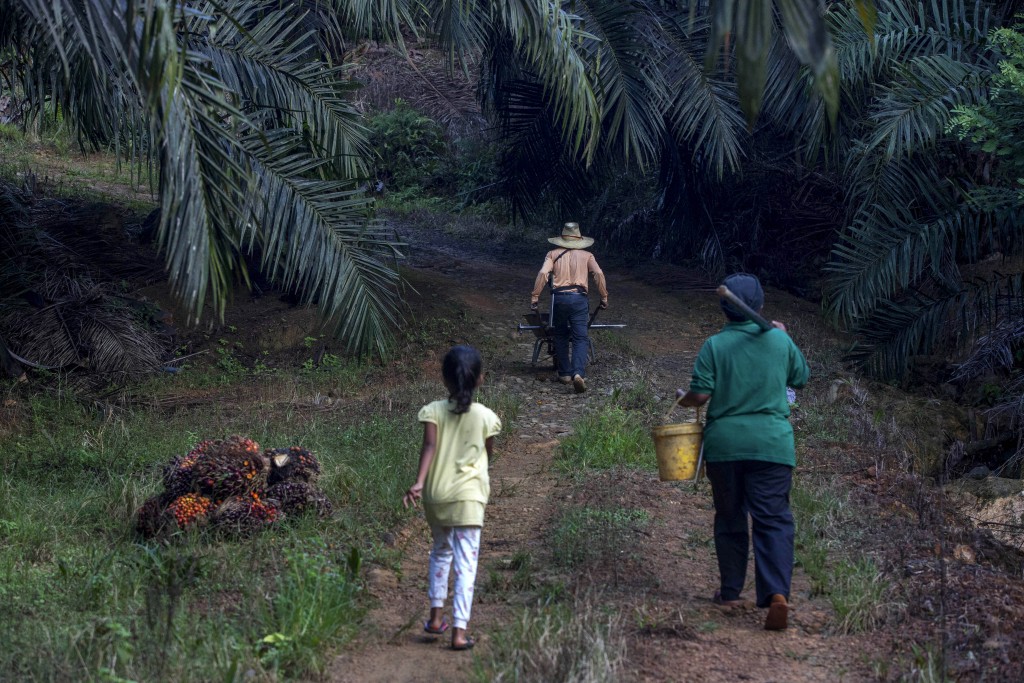 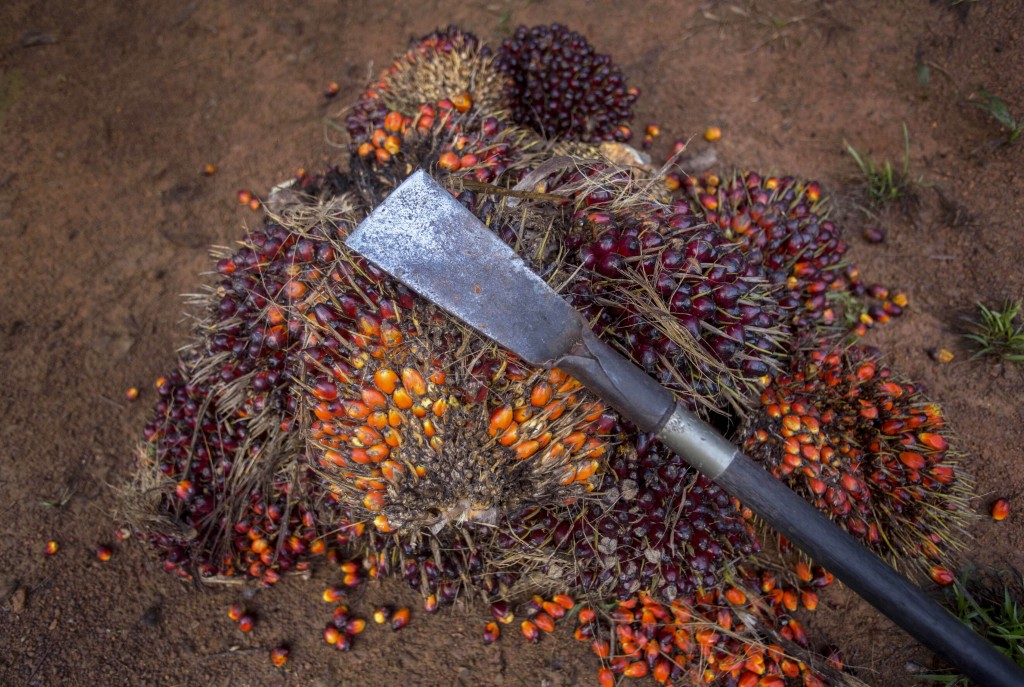 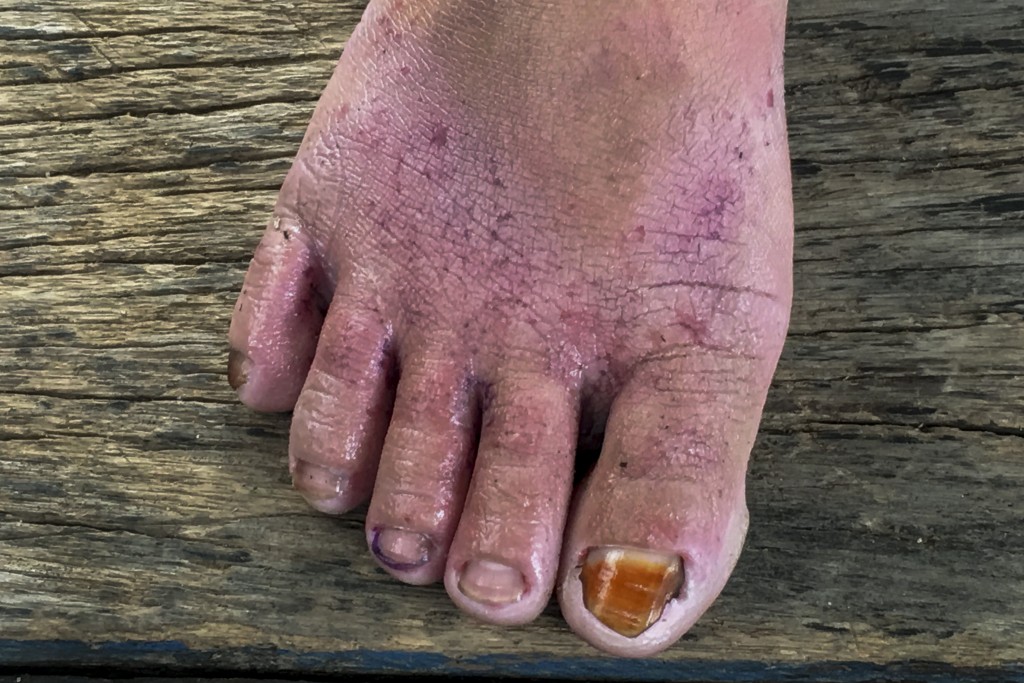 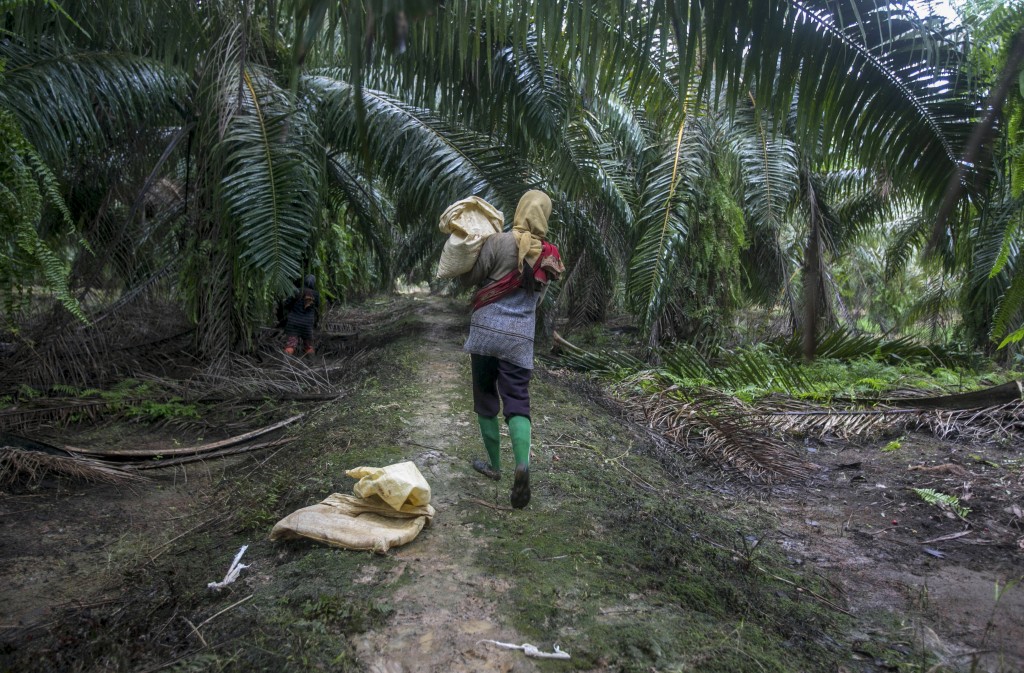 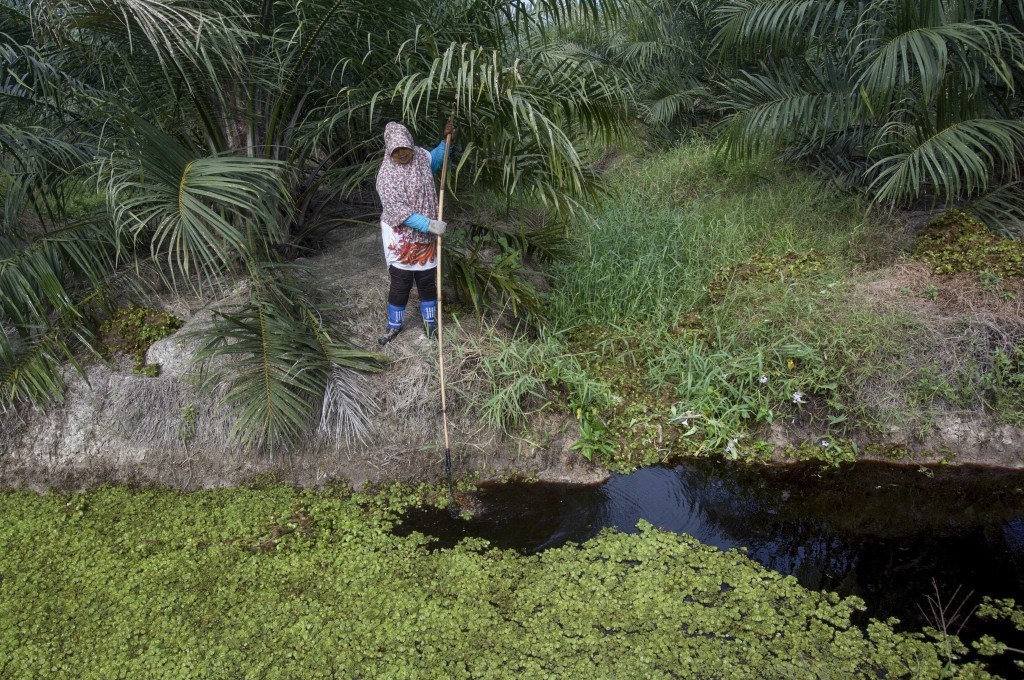 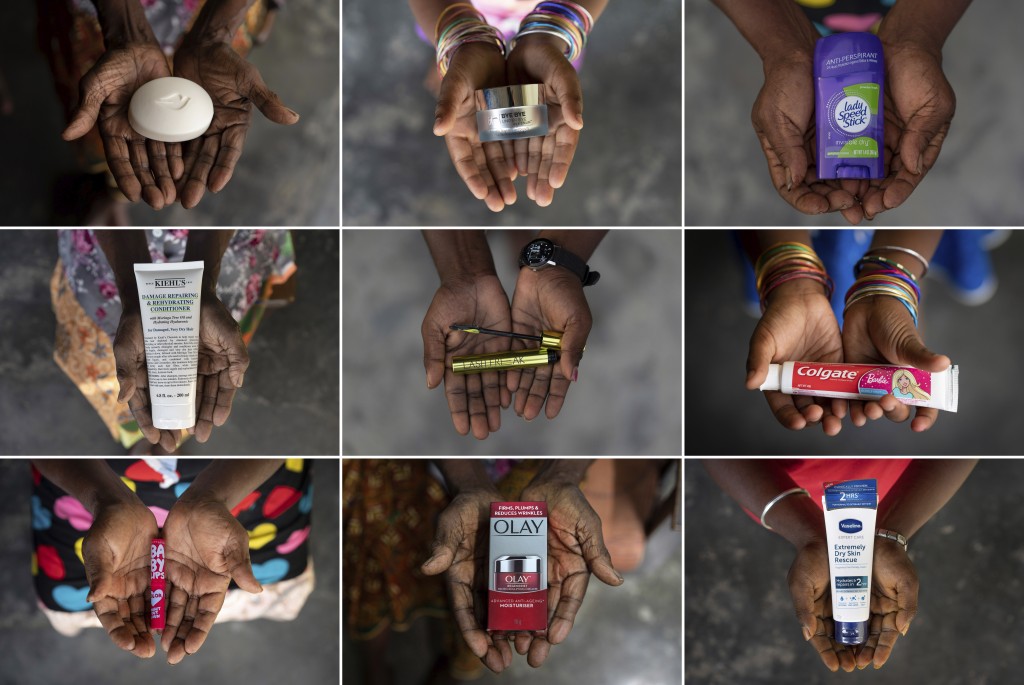 SUMATRA, Indonesia (AP) — The 16-year-old girl describes how her boss raped her amid the tall trees on an Indonesian palm oil plantation that feeds into some of the world’s best-known cosmetic brands. He then put an ax to her throat and warned her: Do not tell.

At another plantation, a woman named Ola complains of fevers, coughing and nose bleeds after years of spraying dangerous pesticides with no protective gear.

Hundreds of miles away, Ita, a young wife, mourns the two babies she lost in the third trimester. She regularly lugged loads several times her weight throughout both pregnancies, fearing she would be fired if she did not.

These are the invisible women of the palm oil industry, among the millions of daughters, mothers and grandmothers who toil on vast plantations across Indonesia and neighboring Malaysia, which together produce 85 percent of the world’s most versatile vegetable oil.

Palm oil is found in everything from potato chips and pills to pet food, and also ends up in the supply chains of some of the biggest names in the $530 billion beauty business, including L’Oréal, Unilever, Procter & Gamble, Avon and Johnson & Johnson, helping women around the world feel pampered and beautiful.

The Associated Press conducted the first comprehensive investigation focusing on the brutal treatment of women in the production of palm oil, including the hidden scourge of sexual abuse, ranging from verbal harassment and threats to rape. It’s part of a larger examination that exposed widespread abuses in the two countries, including human trafficking, child labor and outright slavery. (

Women are burdened with some of the industry’s most difficult and dangerous jobs, spending hours waist-deep in water tainted by chemical runoff and carrying loads so heavy that, over time, their wombs can collapse. Many are hired by subcontractors on a day-to-day basis without benefits, performing the same jobs for the same companies for years – even decades.

“Almost every plantation has problems related to labor,” said Hotler Parsaoran of the Indonesian nonprofit group Sawit Watch. “But the conditions of female workers are far worse than men.”

The AP interviewed more than three dozen women and girls from at least 12 companies across both countries. Because previous reports have resulted in retaliation against workers, they are being identified only by partial names or nicknames.

The Malaysian government said it had received no reports about rapes on plantations, but Indonesia acknowledged physical and sexual abuse appears to be a growing problem, with most victims afraid to speak out. Still, the AP was able to corroborate a number of the women’s stories by reviewing police reports, legal documents, complaints filed with union representatives and local media accounts.

Reporters also interviewed nearly 200 other workers, activists, government officials and lawyers, including some who helped trapped girls and women escape, who confirmed that abuses regularly occur.

In both countries, the AP found generations of women from the same families who have served as part of the industry’s backbone. Some started working as children alongside their parents, gathering loose kernels and clearing brush from the trees, never learning to read or write.

And others, like a woman who gave her name as Indra, dropped out of school as teenagers. She took a job at Malaysia’s Sime Darby Plantations, one of the world’s biggest palm oil companies. Years later, she says her boss started harassing her, saying things like “Come sleep with me. I will give you a baby.”

Now 26, Indra dreams of leaving, but it’s hard to build another life with no education and no other skills. Women in her family have worked on the same Malaysian plantation since her great-grandmother left India as a child in the early 1900s.

“I feel it’s already normal,” Indra said. “From birth until now, I am still on a plantation.”

Women have worked on the estates since European colonizers brought the first trees from West Africa more than a century ago. As the decades passed, palm oil became an essential ingredient for the food industry, as a substitute for unhealthy trans fats. And cosmetic companies were captivated by its miracle properties: It foams in toothpaste, moisturizes soaps and lathers in shampoo.

New workers are constantly needed to meet the relentless demand, which has quadrupled in the last 20 years alone. And on almost every plantation, men are the supervisors, opening the door for sexual harassment and abuse.

The 16-year-old girl who described being raped by her boss in 2017 said it happened when he took her to a remote part of the estate.

Nine months later, she sat by a wrinkled 2-week-old boy. She made no effort to comfort him when he cried, struggling to even look at his face.

The family filed a report with police, but the complaint was dropped, citing lack of evidence.

The AP heard about similar cases on plantations big and small in both countries. Union representatives, health workers, government officials and lawyers said some of the worst examples they encountered involved gang rapes and children as young as 12 being taken into the fields and sexually assaulted by plantation foremen.

While Indonesia has laws in place to protect women from abuse and discrimination, Rafail Walangitan of the Ministry of Women Empowerment and Child Protection said he was aware of many problems identified by the AP on palm oil plantations, including child labor and sexual harassment.

Malaysia’s Ministry of Women, Family and Community Development said it hadn’t received complaints about the treatment of women laborers so had no comment.

Many beauty and personal goods companies have largely remained silent when it comes to the plight of female workers female workers’ plight, but it’s not due to lack of knowledge.

The powerful global industry group Consumer Goods Forum published a 2018 report alerting 400 CEOs that women on plantations were exposed to dangerous chemicals and “subject to the worst conditions among all palm oil workers.”

Most cosmetic makers contacted by the AP defended their use of palm oil and its derivatives, with some attempting to show how little they use of the roughly 80 million tons produced annually worldwide. Others pointed to pledges on their websites about commitments to sustainability and human rights or to efforts to list their processing mills in the name of transparency.

The AP used U.S. Customs records, product ingredient lists and the most recent published data from producers, traders and buyers to link the laborers’ palm oil and its derivatives from the mills that process it to the supply chains of almost all big Western brands -- including some that source from plantations where women said they were raped.

Abuses were even linked to product lines sought out by conscientious consumers like Tom’s of Maine and Kiehl’s, through the supply chains of their giant parent companies Colgate-Palmolive and L’Oréal.

Coty Inc. which owns CoverGirl, did not respond to multiple AP calls and emails. And Estee Lauder Companies Inc., owner of Clinique, Lancome and Aveda, refused to disclose which products use palm oil or its derivatives, but have acknowledged struggling with traceability issues in filings with a global certification association that promotes sustainable palm oil. (need to spell this out or I fear the flak will jump on it and say he didn’t say this)

Both companies, along with Clorox, which owns Burt’s Bees Inc., keep the name of their mills and suppliers secret. Clorox said it would raise the allegations of abuses with its suppliers, calling AP’s findings “incredibly disturbing.”

Some of the women on plantations regularly haul tanks of toxic chemicals on their backs weighing more than 13 kilograms (30 pounds), dispensing 80 gallons each day.

A number who use agrochemicals daily had milky or red eyes and complained of dizzy spells, trouble breathing and blurry vision. Activists reported that some totally lost their sight.

Ita, who has worked on the plantation alongside her mother since the age of 15, was among those who said her work affected her ability to deliver healthy children. She lost two babies, both in the third trimester.

“The second time, I gave birth at seven months and it was in critical condition, and they put it in an incubator. It died after 30 hours,” Ita said.

“I kept working,” she said. “I never stopped after the baby died.”