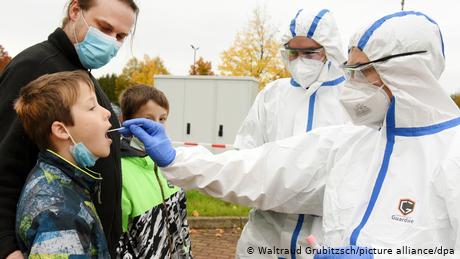 Luxembourg and Slovakia have already tested most of their populations for COVID-19, and now Austria is following their lead. Chancellor Sebastian Kurz hopes to give Austrians the chance of celebrating the upcoming holiday season as usual, more or less.

The aim of mass testing is to carry out as many tests as possible, thereby increasing the chance of detecting infected individuals — both those who are showing symptoms and those who aren't — and making sure they self-isolate as soon as possible.

"We know that about a third of those infected do not fall ill, but they can certainly pass on the virus," said Matthias Orth of the Professional Association of German Laboratory Physicians. Orth, who heads the Laboratory Medicine Department at the Marienhospital in Stuttgart, told DW that every patient is tested at his institution.

"We just got results back for a young man who was scheduled for surgery," said Orth. "He had the highest viral load we have ever measured here, and he had no symptoms at all." Mass testing would flag such cases, he said.

While mass testing makes sense, feasibility remains an issue. Neither Luxembourg, with its population of about 630,000, nor Slovakia with its 5.5 million inhabitants can serve as a blueprint for larger nations like Germany — a country with 83 million people.

Testing Germany would take more than a year

Orth said it's possible to supply a small country like Luxembourg with swabs and reagents, but it's not so easy for somewhere like Germany. And in order for the tests to give a reliable snapshot of the rate of infections within a population, the mass testing program would have to take place simultaneously across the country. That, Orth added, would exceed testing capacities.

"A swab test takes about five minutes per person, on average, so you can imagine how long it would take to test over 80 million people," said Orth.

Read more: COVID-19 vaccines: What do we know so far?

German laboratories currently process about 1.5 million PCR tests per week. "We could easily test the population of Luxembourg in Germany within a week," said Orth. But testing the entire German population within seven days would exceed the laboratory capacities more than 50 times over. In fact, with the current testing capacities it would take 53 weeks — more than a year.

"We already work two, sometimes even three shifts, seven days a week," Orth said. "We could increase our capacity again by about 10 to 20%, but no more."

Another issue that makes mass testing a remote possibility is the chronic shortage of key test materials. Orth said the companies that produce the necessary reagents are already working around the clock, but even at that rate testing in German labs consistently hits roadblocks due to shortfalls.

"If I have a family where the father is ill with COVID-19 and the mother also has symptoms, then I don't need to test her," he said, pointing out additional testing wastes scare resources and that a positive result is a foregone conclusion. "Instead of testing people with symptoms, the focus should be on people with no visible symptoms," Orth added — especially people who were in close contact with an infected person.

If these people test positive, he said, the next step would be to check their close contacts, and so on. This, in a way, would be a mass testing plan suited to countries like Germany, covering not the entire country but specific regions or COVID-19 hot spots.