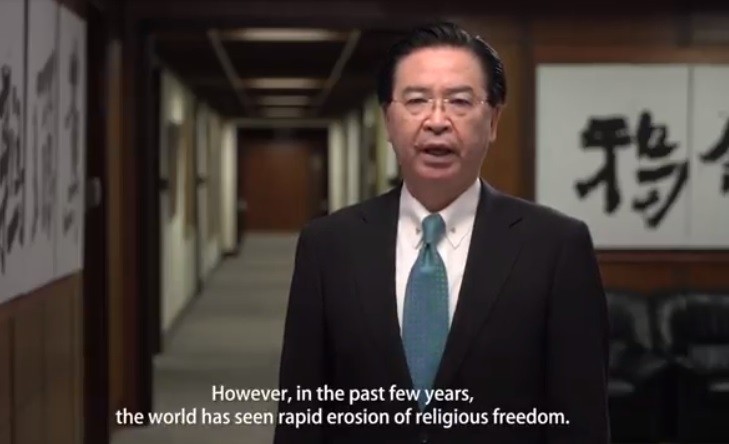 Wu, via a pre-recorded video, called for an international effort to safeguard religious freedom. He claimed that such freedom is experiencing rapid erosion in countries gripped by authoritarianism.

“While many countries have been occupied fighting COVID-19, authoritarian regimes have used the opportunity to impose their will on religious minorities,” Wu noted. “We have seen Muslims in Xinjiang undergoing unspeakable horrors, including displacement, physical abuse, and emotional torture.”

Wu stressed that Taiwan has aligned itself with like-minded partners to "defend the freedom to believe and to help victims of intolerance.” The minister added that Taiwan will host another regional forum on securing religious freedom next year to show the country’s commitment.

According to Douglas Hsu (徐佑典), a senior official at Taiwan’s Foreign Ministry, the Taiwanese representative to the U.S. Hsiao Bi-hkim (蕭美琴) has been invited to join discussions with civil groups and deliver remarks on the second day of the event. Pusin Tali, Taiwan’s ambassador-at-large for religious freedom, is also attending the conference, Hsu noted.

Samuel Brownback, U.S. ambassador-at-large for international religious freedom, commended via Twitter the participation of dozens of countries in the forum while condemning Beijing for its religious persecution.

“Even as we gather for the 3rd Ministerial to Advance Freedom of Religion or Belief, the PRC is intensifying its decades-long war on faith,” said Brownback. “The CCP continues to order religious groups to infuse communist dogma into the teachings and practice of their faith, he said, adding that: “This is not acceptable.”

Even as we gather for the 3rd Ministerial to Advance Freedom of Religion or Belief, the PRC is intensifying its decades-long war on faith. The CCP continues to order religious groups to infuse communist dogma into the teachings and practice of their faith. This is not acceptable.

Originally created by the U.S. Department of State, this year's Ministerial to Advance Freedom of Religion or Belief is hosted by Poland and began Monday. The two-day event is entirely virtual in light of the ongoing pandemic.

The Polish foreign ministry said on its website that the forum aims to “scale up the international community’s efforts to promote freedom of religion or belief and protect members of religious minorities.” The discussions between high-level representatives of states and multilateral organizations, civil society, and religious leaders on these issues are more important than ever at a time of virus crisis, it noted.