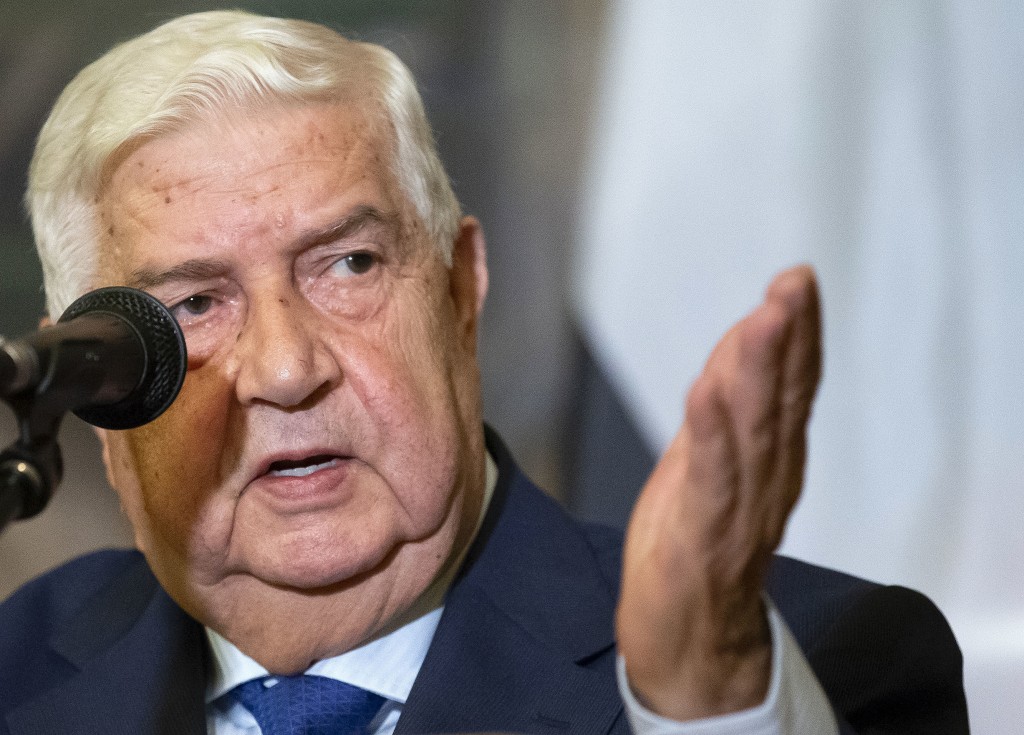 BEIRUT (AP) — Syria’s Foreign Minister Walid al-Moallem, a career diplomat who became one of the country’s most prominent faces to the outside world during the uprising against President Bashar Assad, died Monday. He was 79.

Al-Moallem, who served as ambassador to Washington for nine years starting in 1990 during Syria’s on-and-off peace talks with Israel, was a close confidant of Assad known for his loyalty and hard-line position against the opposition.

A soft spoken, jovial man with a dry sense of humor, al-Moallem was also known for his ability to defuse tensions with a joke.

During the current crisis, he often held news conferences in Damascus detailing the Syrian government’s position. Unwavering in the face of international criticism, he repeatedly vowed that the opposition, which he said was part of a Western conspiracy against Syria for its anti-Israel’s stances, would be crushed.

A short and portly man with white hair, his health was said to be deteriorating in recent years. The state-run SANA news agency reported his death, without immediately offering a cause.

Born to a Sunni Muslim family in Damascus in 1941, al-Moallem attended public schools in Syria and later traveled to Egypt, where he studied at Cairo University, graduating in 1963 with a bachelor's degree in economics.

He returned to Syria and began work at the foreign ministry in 1964, rising to the top post in 2005.

In 1972, he headed the Syrian mission to London and in 1975 moved to Romania, where he spent five years as ambassador. He then returned to Damascus, where he headed the ministry’s documentation office until 1984, when he was named as the head of the foreign minister’s office.

He was appointed as Syria’s ambassador to Washington in 1990, spending nine years in the U.S. During that time Syria held several rounds of peace talks with Israel.

In 2005, he was appointed foreign minister at a time when Damascus was isolated by Arab and Western nations following the assassination of former Lebanese Prime Minister Rafik Hariri.

Many Lebanese, Arabs and Western governments blamed Syria for the massive blast that killed Hariri — accusations that Damascus repeatedly denied. Syria was forced to end nearly three decades of domination and military presence in its smaller neighbor and pulled out its troops in April that year.

In 2006, al-Moallem became the most senior politician to visit Lebanon after Syrian troops withdrew. He attended an Arab foreign ministers meeting during the 34-day war between Israel and Lebanon’s militant Hezbollah group, a strong ally of Syria.

“I wish I were a fighter with the resistance,” al-Moallem said in Beirut at the time, triggering criticism from anti-Syrian Lebanese activists who poked fun at him as being overweight and unfit to fight.

After the uprising against Assad began in March 2011, al-Moallem was tasked with holding news conferences in Damascus to defend the government’s position. He traveled regularly to Moscow and Iran, key backers of the Syrian government, to meet with officials there.

During a news conference a year after the conflict began, al-Moallem was asked to comment about then French Foreign Minister Alain Juppe’s comment that the regime’s days were numbered.

Al-Moallem answered with a smile on his face: “If Mr. Juppe believes that the days of the regime are numbered I tell him, wait and you will see.”

“This is if God gives him a long age,” al-Moallem said.

In February 2013, he was the first Syrian official to say during a visit to Moscow that the government was ready to hold talks even with those “who carried arms.”

In early 2014, he headed Syria’s negotiating team during two rounds of peace talks with the opposition in Switzerland. The talks, which eventually collapsed, marked the first time that members of the Syrian government sat face-to-face with Syrian opposition figures.

Al-Moallem was widely criticized for a rambling speech he gave at the start of Syria’s peace conference in Montreux, Switzerland. Then U.N. chief Ban Ki-moon repeatedly asked him to step away from the podium when he exceeded his time limit.

Al-Moallem ignored Ban’s pleas, setting off a tense exchange that showed the tensions in trying to resolve Syria’s bloody conflict.

“You live in New York. I live in Syria,” al-Moallem snapped. “I have the right to give the Syrian version here in this forum. After three years of suffering, this is my right.”

Al-Moallem then proceeded with his speech, saying he had a few minutes left. Ban asked him to keep his promise.

“Syria always keeps its promises,” al-Moallem replied, triggering approving laughter from the Syrian government delegation behind him and a grin from Ban.

Al-Moallem is survived by his wife, Sawsan Khayat and three children, Tarek, Shatha and Khaled.