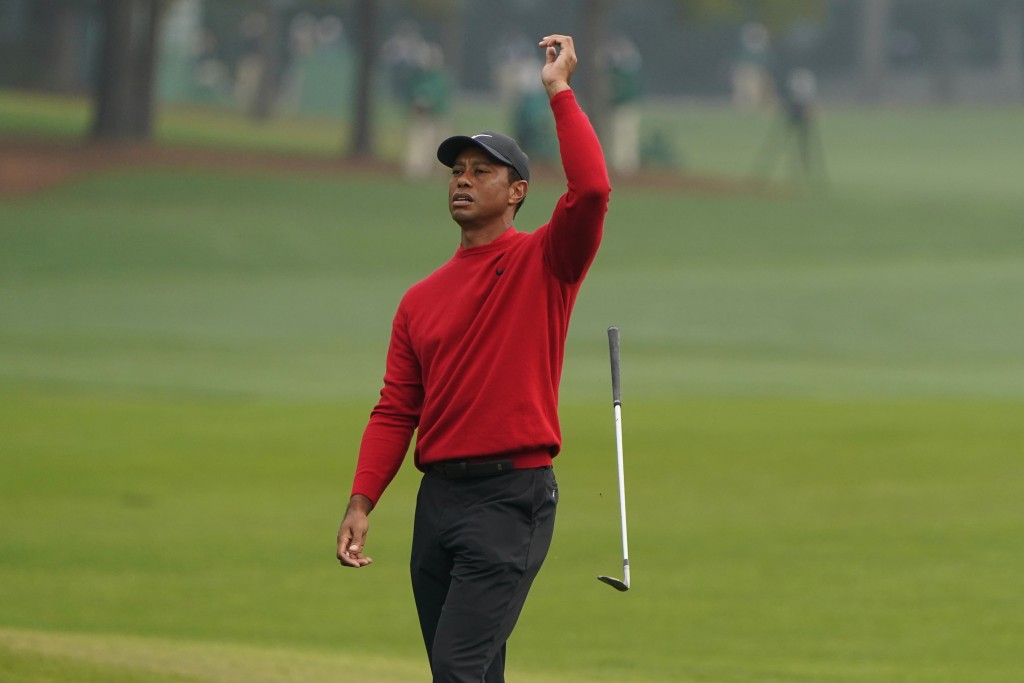 The defending Masters champion recorded a septuple-bogey 10 on the 12th hole of the final round — the highest score on any hole in his career.

Woods plunked three balls into Rae’s Creek on Sunday in front of the green on Augusta National's signature 155-yard par 3. The carnage at Amen Corner dropped him from 3 under to 4-over 76 for the day, and only a late string of birdies saved him from his matching his worst Masters round ever.

“This sport is awfully lonely sometimes,” Woods said. “No one is going to bring you off the mound or call in a sub. You have to fight through it.

“You just have to turn around and figure out the next shot,” said Woods, who followed the debacle at No. 12 with birdies on five of the last six holes to finish 1 under for the tournament, tied for 38th. “And I was able to do that coming home.”

Woods has been especially alone this year.

The 15-time major champion usually draws the biggest galleries in golf, but only a few dozen people were watching Sunday due to the coronavirus pandemic that delayed the tournament from the spring and limited crowds to Augusta National members, coaches and players’ significant others.

They were left counting on their fingers, trying to keep track of all of his shots at the par 3 known as Golden Bell.

Entering the final round 11 strokes behind leader Dustin Johnson, Woods had all but seen his pursuit of a sixth green jacket end by the time he arrived at No. 12 following bogeys on the fifth, seventh and 10th holes that left him 2 over for the day.

His tee shot landed on the far bank of the creek and rolled back into the water. Woods said he misread the wind on that shot when it shifted after his two playing partners already had hit.

“That just started the problem,” he conceded. “From there, I hit a lot more shots and had a lot more experiences there in Rae’s Creek.”

After a drop, he hit his third shot a little farther but it, too, rolled back into the water. His third attempt to clear the creek — shot No. 5 — went into a bunker behind the green.

Left with an awkward uphill stance — his right leg extended and his left almost completely bent — Woods flew the green on his sixth shot and plunked it into the water. He went back to the bunker, bounced up and down a couple of times to get comfortable in the same crooked stance and put shot No. 8 on the green, about 12 feet from the pin.

His first putt slid by the left edge of the hole, leaving him a tap-in for 10. All that was left for Woods was to finish the round and head to Butler Cabin to slip the green jacket onto his successor's shoulders.

“I’ve hit a few too many shots (more) than I wanted to today, and I will not have the chairman be putting the green jacket on me,” he conceded while Johnson and the rest of the leaders were still on the course. “I’ll be passing it on.”

Last year at No. 12, Woods was propelled to his fifth Masters title when four contenders dumped their shots into Rae’s Creek. In the four rounds of his 2019 victory, he needed only 12 strokes to par the 12th on four straight days.

In fact, Woods needed only eight strokes combined to play the hole in his first three rounds this year. But Sunday's misadventures erased what had been a respectable title defense and set Woods on course for what could have matched his worst score ever at the Masters: a third-round 77 as a 19-year-old amateur making his first appearance in 1995.

“That’s what makes this game so unique and so difficult mentally,” he said. “We’ve all been there, unfortunately. Unfortunately, I've been there.”

The good news: Woods probably needs to wait only five months to try again. The last major in 2020 is scheduled to be the first major of '21 if the pandemic allows it to return to its usual spring slot.

“Hopefully if everything continues the way it is going right now, then we’re able to have this event in April,” Woods said.