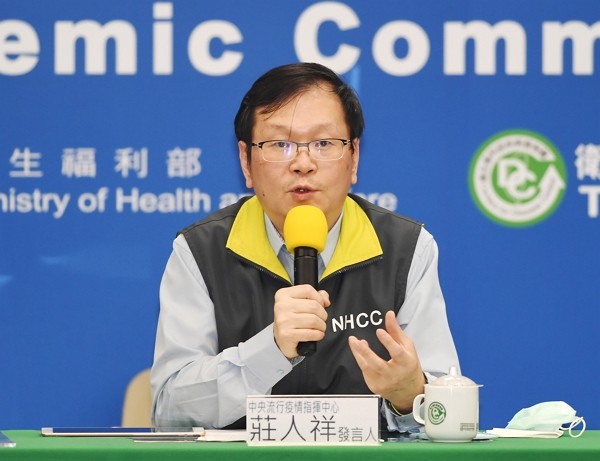 During a press conference Saturday afternoon, CECC spokesman Chuang Jen-hsiang (莊人祥) announced three new imported coronavirus cases, raising the total number of confirmed cases in Taiwan to 600. The latest cases include a Taiwanese woman, a Croatian man, and an Indonesian woman who traveled to Taiwan for work.

According to Chuang, case No. 599 is a Taiwanese woman in her 40s who left the country to visit family in the Philippines in February and returned on Oct. 29. When she completed the 14-day quarantine requirement on Nov. 11, she received a "weak positive" coronavirus test result and was given a second polymerase chain reaction (PCR) test, which came back negative.

However, after the woman was cleared to go home, the health department administered another coronavirus test on the saliva specimen collected from her with a new test kit and found the result to be positive. She was officially diagnosed with COVID-19 on Nov. 14.

Chuang said the woman had traveled home on a Taiwan High Speed Rail (HSR) train but there was no one sitting beside her. Since all passengers and staff on the train were wearing masks during their ride, no contacts have been listed for the case.

Case No. 600 is an Indonesian woman in her 30s who came to work in Taiwan on Nov. 7. She began to experience symptoms such as coughing, a sore throat, a fever, and loss of the sense of smell on Nov. 11 and was diagnosed with COVID-19 after undergoing a coronavirus test.

The health department has identified 42 people who came in contact with the woman, including 12 airline crew members, and 29 fellow passengers, and a man who shared a car with her.

Chuang said Case No. 601 is a Croatian man in his 40s who came to work in Taiwan on Oct. 29. He was diagnosed with coronavirus in July, in Croatia, but later recovered during the 14-day quarantine period.

Although he had tested negative for COVID-19 three days before he arrived in Taiwan, the man was again confirmed with the disease on Nov. 14 after finishing quarantine. This led to the authorities locating three of his co-workers who came in close contact with him and requesting them to commence home isolation.

Since one case had originally been listed as No. 530 but was later reclassified as not infected, there is a discrepancy in the categorization of the case number. The most recent cases, therefore, have been listed as Nos. 599, 600, and 601.

Out of the 600 officially confirmed cases, 508 were imported, 55 were local, 36 came from the Navy's "Goodwill Fleet," one is an unresolved case, and one (case No. 530) was removed as a confirmed case. Up until now, seven individuals have succumbed to the disease, while 535 have been released from hospital isolation, leaving 58 patients still undergoing treatment in Taiwan.