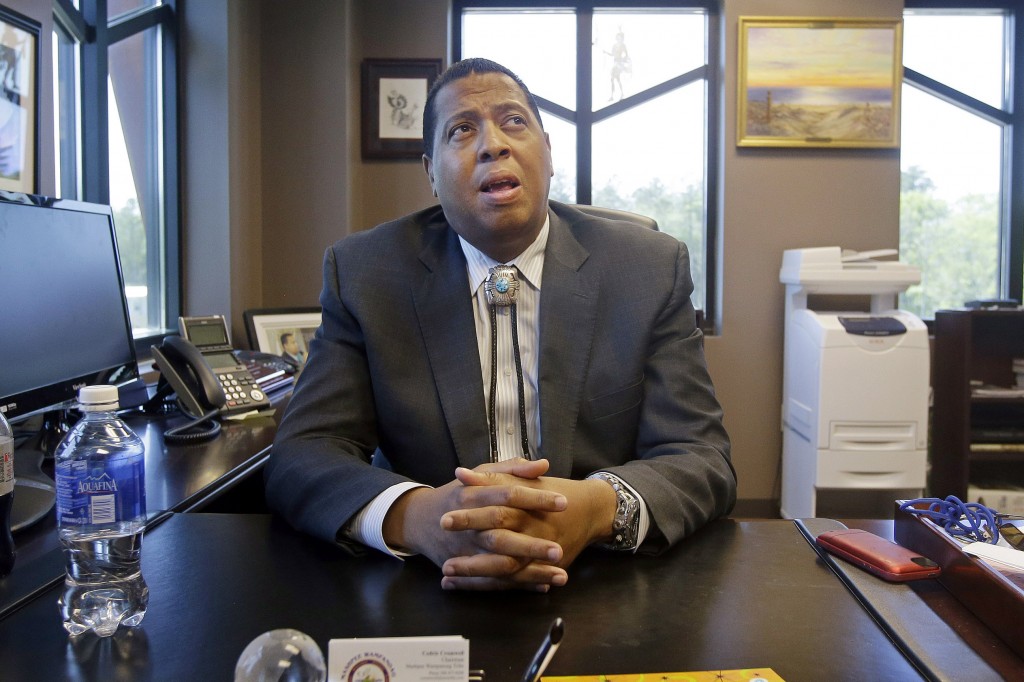 BOSTON (AP) — The chairman of a Massachusetts tribe and the owner of an architecture firm have been charged in a bribery scheme involving the tribe’s plans to build a resort casino, federal prosecutors said Friday.

Cedric Cromwell, 55, of Attleboro, and David DeQuattro, 54, of Warwick, Rhode Island, were indicted on charges of accepting or paying bribes and conspiring to commit bribery. Cromwell, who is chairman of the Mashpee Wampanoag tribe, also faces extortion charges.

Joseph Bonavolonta, the head of the FBI's Boston office, said Cromwell is accused of using his position as chairman to extort tens of thousands of dollars in bribes from DeQuattro, who owns an architecture-and-design company in Providence.

Between 2014 and 2017, authorities said DeQuattro provided Cromwell with payments and other benefits valued at nearly $60,000 in exchange for nearly $5 million in contracts with the tribe's gaming authority, which Cromwell heads.

The indictment alleges Cromwell spent all of the money on personal expenses, including payments to his mistress. DeQuattro also purchased Cromwell a home gym and paid for a weekend stay at a Boston hotel for his birthday, according to the indictment.

“Many American Indians face a host of difficult financial and social issues," U.S. Attorney for Massachusetts Andrew Lelling said in a statement. “They require — and deserve — real leadership. But it appears that Cromwell’s priority was not to serve his people, but to line his own pockets.”

Cromwell, his lawyer, and a lawyer for DeQuattro didn’t respond to emails seeking comment. The defendants are scheduled to appear in Boston federal court by videoconference later Friday.

The tribe said in a statement it's “deeply concerned" about the charges and that its council will be holding an emergency meeting Friday to take immediate action. It didn't elaborate.

The Cape Cod-based tribe traces its ancestry to the Native Americans who shared a fall harvest meal with the Pilgrims in 1621. It gained federal recognition in 2007 and had more than 300 acres placed into federal trust and declared its sovereign reservation in 2016 under then-President Barack Obama's administration.

The tribe swiftly broke ground on its planned, $1 billion First Light casino in Taunton, a city south of Boston, along with Genting Group, a major Malaysia-based casino developer.

But the project was halted amid a series of legal and political setbacks as President Donald Trump's administration seeks to undue the tribe's Obama-era land designations.

Earlier this year, the federal Bureau of Indian Affairs said it would move to rescind the tribe's 300-acre reservation designation and remove the land from federal trust.

A federal judge in June halted the move and ordered the Interior Department to review the matter and issue new findings. The agency has appealed.

President Trump has also opposed legislation passed in the Democrat-led House to protect the tribe's reservation, regardless of what the courts decide, as a “special-interest casino bill."