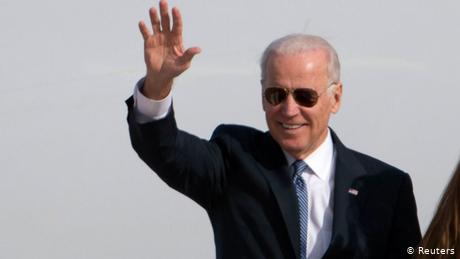 Following the election of Joe Biden, South Korea looks like it is eager to leave behind the "America first" motto of outgoing President Donald Trump, along with Trump's brinksmanship in confronting North Korea and its nuclear weapons program.

Biden emphatically announced "America is back" after the 2020 election was called in his favor. For South Korea, this could me a return of a multilateral diplomatic approach more in keeping with traditional US foreign policy.

On Thursday, President-elect Biden had a 14-minute phone conversation with South Korean President Moon Jae-in. During the call, Biden said the US will "firmly maintain our defense commitment to South Korea and cooperate closely to resolve the North Korea nuclear issue," extolling South Korea as the regional "lynchpin of security and prosperity," according to South Korea's presidential office.

Read more: Joe Biden reaches out to allies in the Asia-Pacific

The potential for warm ties between the two presidents would contrast with Trump's rocky relationship with President Moon.

"On a personal level, there's not much love lost between Moon and Trump," Go Myong-hyun of Seoul's Asan Institute told DW, adding that the relationship was strained by Trump's demands that South Korea pay more to host US troops while implying that South Korea was taking advantage of the US.

On the military defense cost-sharing issue, South Korea could have an easier time dealing with Biden.

There are currently about 30,000 US soldiers stationed throughout the South Korea, which has hosted US troops since the Korean War ended with an armistice in 1953.

The cost of maintaining this military presence is shared between South Korea and the US with an agreement usually renewed every five years.

President Trump demanded a five-fold increase to $5 billion per year, to be renegotiated annually. He threatened to withdraw American forces entirely if his financial demands were not met.

President-elect Biden telegraphed a reversal of that policy, telling South Korea's Yonhap News on October 29 that he would "stand with South Korea, strengthen our alliance to safeguard peace in East Asia and beyond, rather than extort Seoul with reckless threats to remove our troops."

President-elect Biden is widely expected to "return to value alliances that will free South Korea from having to pay more to host US. troops," said Asan analyst Go, predicting that the US will accept Seoul's offer of a 13% increase in South Korea's contribution over five years.

On Friday, Pyongyang's state media, KCNA, called President-elect Biden a "rabid dog," that needed to be "beaten to death with a stick."

Biden's transition team promptly responded to North Korea's verbal assaults, suggesting the President-elect would wear such attacks like "a badge of honor." Biden has referred to North Korean leader Kim Jong Un as a "brutal dictator."

President Trump on two occasions met with Kim Jong Un, and touted his relationship with the dictator, saying the two "fell in love." But the outcome of the summits was little more than pageantry, and a non-binding "joint statement."

North Korea agreed to halt nuclear tests and long-range missile launches. However, since the summits, North Korea has tested several short-range missiles and has not made substantial steps towards dismantling its nuclear program.

During a military parade in October 2020, North Korea also displayed its largest-ever intercontinental ballistic missile, causing concern that its weapons program has been advancing considerably behind the scenes.

Kim wanted relief from United Nations Security Council sanctions in exchange for denuclearization, but wouldn't budge unless the US removed its forces from South Korea.

Despite Trump's promises of an unprecedented breakthrough, the last Trump-Kim summit in Hanoi in February 2019 ended abruptly without concessions on either side, and the stalemate continues.

No 'love letters' for Biden

The exchange of "love letters" between Kim and Trump will likely not be repeated with Biden.

The US President-elect has argued that Trump' relations with Kim politically legitimized "a thug."

However, Biden's approach, which may be similar to that of previous administrations, "increases the likelihood of North Korea reverting back to the familiar language of provocations," said Go.

President Moon has long made peace with Pyongyang a primary policy goal, recently calling for an official declaration to end the Korean War.

President Trump's top down approach and sensational summitry had "created space for South Korea to play an active role in inter-Korean relations and in relations between Washington and Pyongyang," said Go.

But since the failed Hanoi summit, inter-Korean ties have frayed.North Korea blew up a specially constructed inter-Korean liaison office in 2019.

President-elect Biden could find himself disagreeing with Seoul's policy of getting closer to Pyongyang, as Moon continues to press for putting inter-Korean engagement ahead of pressuring Pyongyang on denuclearization and human rights.

Korea Peace Foundation’s Park Young-ho told DW that If the Moon administration wants to "establish a robust alliance with the Biden administration … it should not deviate from mutual assured values of democracy and human rights."

South Korean President Moon during his brief congratulatory call with Biden perhaps sought to close ranks with the incoming US president, saying, "I very much look forward to working with you for our shared values."