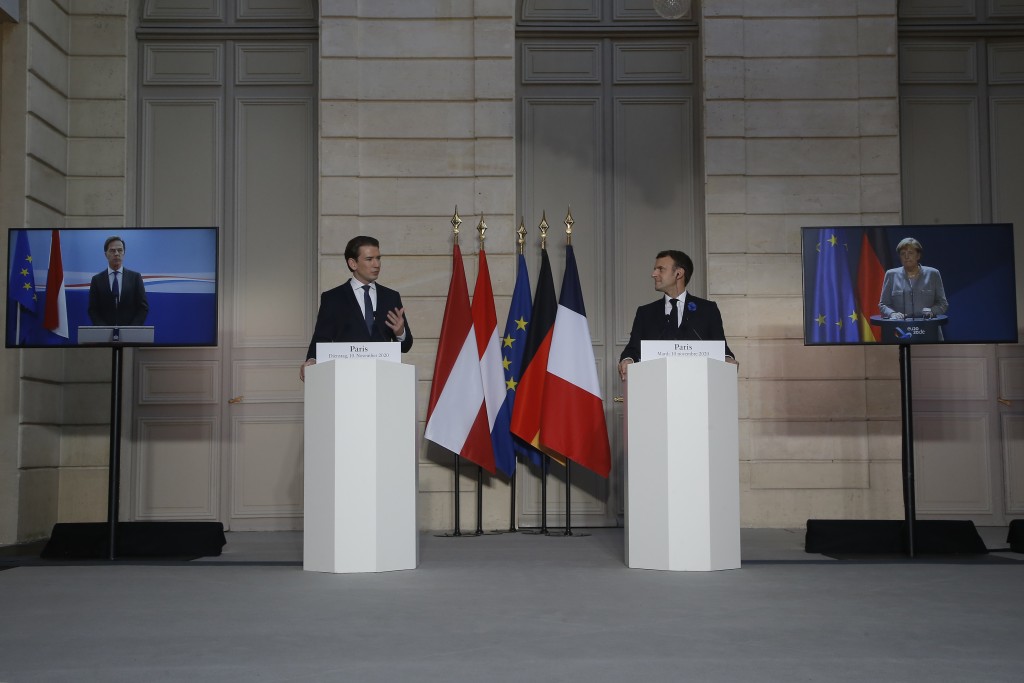 The ministers met via video conference on the fifth anniversary of one of the bloodiest attacks in recent memory on European soil, the Islamic State-claimed rampage in Paris that killed 130 people at a music hall and cafes on Nov. 13, 2015.

Austria and France want their partners to agree to tighten Europe’s border controls, better tackle “terror content” and propaganda online, and monitor or detain jihadi fighters who’ve returned to EU countries and are either in prison or at large.

The ministers are also considering a proposal to train imams in Europe.

It comes after an attack in Vienna on Nov. 2, when a man who officials said had tried to join the Islamic State group shot four people to death in the Austrian capital before police fatally shot him. The shooting strengthened calls in Austria for a crackdown on Islamic extremism.

In France last month, an extremist killed three people in a church in the French city of Nice, and a Chechen teenager beheaded a teacher near Paris because he had shown his students cartoons of Islam’s prophet for a discussion about freedom of expression.

EU Counter-Terrorism Coordinator Gilles de Kerchove said on Nov. 3 that the Islamic State group doesn't appear to be actively preparing any attacks in Europe, but it continues to inspire individuals or small groups to commit atrocities.

Given the difficulty of gathering solid evidence against so-called foreign fighters in conflict zones like Syria or Iraq, many former jihadis who’ve been jailed have only received sentences of three to five years, de Kerchove said, and some are now living freely in Europe.

Austrian Chancellor Sebastian Kurz has branded them “ticking time bombs” that are “a permanent danger among us.”

Kurz has also denounced “political Islam, radicalization” in Europe that has become “the poison, the breeding ground for terrorism.” That dovetails with French President Emmanuel Macron’s planned law to fight “separatism,” which is aimed at rooting out those espousing radical Islam in France.

European Council President Charles Michel has referred to a “battle of values” with extremists.

“The training given to imams practicing in Europe does not sufficiently take into account our fundamental values, in particular freedom of thought and gender equality,” he wrote in a newsletter on Thursday.

He said that the EU should support any initiative aimed at “promoting an Islam which unequivocally embraces European values,” and “setting up one or more educational and training institutions for training imams.”

EU leaders will discuss proposals from Friday's meeting at a summit on Dec. 10-11.