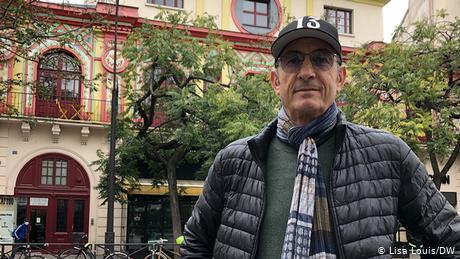 A love for music proved almost fatal for Serge Maestracci at the Bataclan music hall on November 13, 2015. And yet, this affection has also been his lifebuoy ever since.

He had started writing songs shortly before the attack. Since then, he's been rehearsing regularly with his band at a studio in the suburb of Saint-Ouen, just north of Paris. Like on a recent Thursday morning, when he was singing a song called 'Bataclan,' which describes how his son had difficulties going to sleep on the night of the 13th.

"Music has helped me get through the worst time of my life. I was terrified after the attack. I was afraid to leave the house, to cycle through the city. I felt I had become a target," the 66-year-old says to DW.

"Music was my way to express my feelings and what I'd experienced. When you go through an event like this, you think, I escaped death by a few minutes. Life grinds to a halt. But then, it continues and you think — I need to live life to the fullest!"


Healing with the arts

That horrific night in November 2015, gunmen killed 130 people in the mass shootings and suicide bombings across Paris. Ninety of them were murdered at the Bataclan during a concert fronted by rock band Eagles of Death Metal.

Since 2015, jihadist attacks have killed more than 250 people in the country and left thousands struggling with physical and psychological scars.

Music isn't Maestracci's only way to help deal with the trauma. In the suburb of Colombes, 8 kilometers further west of Saint-Ouen, he walks into his workshop, a small flat in an apartment tower. There's a canvas stand, paint tubes lined up on a wooden table, and oil paintings hanging on the walls.

"Painting occupies my mind, it cuts me off from what's going on around me," he says. "Sometimes, I paint all day and when I look up, it's suddenly dark outside. Through painting, you make time pass and that helps — time helps. Because little by little, the nightmare you had to live through is fading away."

The themes of Maestracci's tableaus changed after the attack — from rather lively scenes to landscapes. "I started to paint calm moments which make life worth living. I wanted to completely get away from what I had gone through," he says.

Apart from that one painting from right after the attack, that is. It shows a French flag with red paint running down the picture; as if France was bleeding.

Maestracci managed to get out of the Bataclan through a side door shortly after the first shots were fired.

But others, such as Christophe Naudin, would be forced to endure longer. As the three gunmen were holding hundreds of people hostage, he hid in a closet for hours, squeezed in with two dozen people.

To better deal with the trauma of that night, he recently published a book called Diary of a Bataclan Survivor. It describes how, during the first year after the attack, he went out often and met with people. But once back home, reality struck.

During the second phase, Naudin started taking a step back from what had happened. And finally, from year three after the attack, he was able to put things into perspective so that things terror-related wouldn't get to him as easily anymore — in large part due to meeting his new girlfriend Laetitia.

"Writing up my thoughts instead of just brooding over what had happened has really helped me," he says to DW. "And it was good to go through it again to get it into shape for the book. All this is part of my reconstruction."

Read more:France Muhammad cartoon row: What you need to know

Naudin's post-traumatic stress symptoms, headaches and insomnia, are getting better. Although they resurface with every new jihadist attack. Such as the recent beheading of 47-year-old history teacher Samuel Paty, whom an Islamist extremist killed for showing a cartoon of the Prophet Muhammed in class. That cartoon had been published by satirical magazine Charlie Hebdo, itself targeted in a jihadist attack in January 2015, during which 12 people were killed. The court case on the extremists' possible helpers is currently ongoing — the assailants themselves were killed by police shortly after the attack.

Naudin can relate to Paty's death — he is a history teacher himself and about the same age. "We had more or less the same approach to teaching. This has really devastated me and my girlfriend, who's also a teacher," he says, adding that his symptoms of post-traumatic stress are less severe than they probably were a few years earlier.

Laurent Tigrane Tovmassian says post-traumatic stress often takes time to get better. But that music, art and writing can help. He's a Paris-based psychotherapist and the head of the department for psychological trauma at Chapelle-aux-Champs Centre for Mental Health at UCL University in the Belgian capital of Brussels.

He's been treating some of the survivors of the November 2015 attacks.

"Writing allows people to re-take possession of what they have gone through. It helps them take the necessary distance for these events to no longer possess them," he tells DW. "And painting and making music reconnects them with their creativity. That's important, as trauma affects a person's creativity, projects for the future and dreams."

'You can't just erase this from your memory'

And yet, survivors are unlikely to completely forget what happened to them, he adds.

"You can't just erase that from your memory," Tovmassian says. "The only way to move forward is to accept it and incorporate it into your life. Then, you might at one point even be able to say: What doesn't kill me makes me stronger."

Maestracci is meanwhile determined to keep on singing and painting — not only because it helps his wounds heal further.

"Radical Islamists would like to see a society in which you can't draw, make music or sing," he says. "They believe that only the Prophet has the right to do that. This is my way of saying: No, I exist. I'm alive and I want to continue doing what I'm free to do in my country."