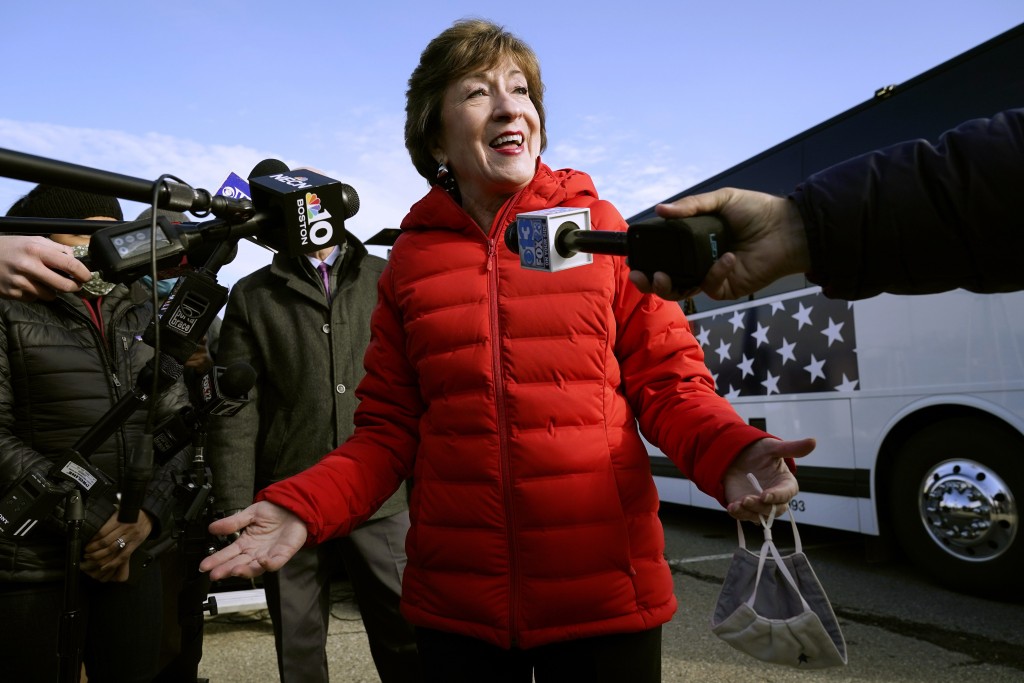 PORTLAND, Maine (AP) — If Republicans are able to hold onto their majority in the U.S. Senate, the remarkable staying power of Susan Collins will be a big reason why.

Collins defied prognostications of doom from Washington's consultant class to score perhaps the most unexpected victory of the 2020 cycle, hanging a lopsided loss on a Democratic challenger despite a pile of outside Democratic money and open hostility from the leader of her party, President Donald Trump.

Revitalized and empowered, Collins now has the chance to wield her influence over a Senate where the sweet spot for President-elect Joe Biden’s agenda will be found somewhere in the moderate middle — the political space she’s happily called home for decades.

“It’s a sign that my colleagues realize if we’re going to serve the American people, we need to come together,” Collins said.

Mainers largely have embraced Collins' call for pragmatism since sending her to the Senate in 1997. But Democrats banked on increased polarization eroding that support. They attacked the senator as an enabler of Trump and his combative politics, much as they sought to leverage national outrage over Trump into enough Senate victories to flip the body to Democratic control. So far, they’ve succeeded in flipping only two seats, in Arizona and Colorado.

Mainers showed they weren't ready to hold Collins responsible for the leader of her party. As Biden won the state, Collins outperformed Trump by 7 percentage points, and her opponent, Democrat Sara Gideon, had little success peeling moderate voters away from the senator. Collins appeared to beat Gideon with independents while overwhelmingly holding on to Republicans, according to AP VoteCast, a survey of voters.

The senator claimed that strength was not a surprise. On Thursday, she scoffed at pre-election polls that showed her trailing Gideon, including one purporting to show Collins was losing her home turf of Aroostook County in northern Maine. In the end, Collins won Aroostook comfortably and her nine-point statewide win exceeded the final survey from her own pollster, she told reporters on Thursday.

“That is where I'm from. There is no way on Earth that I was going to be losing Aroostook County," Collins said, noting the support she felt on a late-campaign bus tour of the state. “The response was so good I thought, ‘How can these people say I’m losing?’"

Collins has made herself a force in the state, showing up to crack crustaceans at lobster bakes or to crack a bottle of Champagne against the bow of a warship she sponsored at Navy shipbuilder Bath Iron Works. She reminded voters of the money she brought to the state for Navy destroyers, port projects and bridges.

She often reminded voters she’s in line to become chair of the powerful Appropriations Committee in two years.

Collins became a top Democratic target after her 2018 vote to confirm Supreme Court Justice Brett Kavanaugh, who was accused of sexual assault at a high school party. She opposed last month's confirmation of Justice Amy Coney Barrett, agreeing with Democrats that whoever won the presidential election should get to choose Ruth Bader Ginsburg's successor.

In Maine, Gideon raised more than $69 million, vastly outspending Collins, but the veteran senator leaned on her long-standing support in rural Maine and in small towns and cities — essentially everywhere but the liberal Portland area — to win.

It wasn't a typical victory for Collins, who has cruised to victory with little resistance since defeating Democratic former Gov. Joseph Brennan in 1996. The race drew hundreds of millions in outside money. And that allowed Collins to portray herself as the underdog against a candidate who’s “from away” — Gideon's from Rhode Island — and was backed by outsiders, noted Mark Brewer, a University of Maine political scientist.

The result echoed other high-profile, big-money Senate races around the country. Each Democrat ran up against a Republican incumbent who is reviled by liberals around the U.S. but enjoys strong support in their home state. Amy McGrath raised more than $90 million for her run against Senate Majority Leader Mitch McConnell in Kentucky and was roundly defeated. Jaime Harrison raised more than $108 million for a run against Trump critic-turned-ally Sen. Lindsey Graham in South Carolina and came up short. High-profile races in Georgia remained undecided.

Now, Collins is preparing to carve out a key role as a senator willing to work with the other side. She said she's been thwarted in those efforts lately. Democrats in the Senate admitted that Democratic leader Chuck Schumer discouraged them from sponsoring bills with Collins or other actions that might help her burnish her bipartisan brand as Democrats eyed her seat.

“I hope that that foolishness can go away and that Sen. Schumer will finally put the interests of the country first rather than being so obsessed with his personal power," Collins said.

And, as they have for almost a quarter of a century, Mainers will be counting on Collins in the Senate.

“What the Lincoln Project or the Democratic Senatorial Campaign Committee thinks doesn’t translate into the voting booth when Sen. Collins has been at your high school graduation ceremony or the fundraiser for a community school project,” said Maine GOP executive director Jason Savage, citing two big Collins detractors. “She knows Maine. She is Maine.”