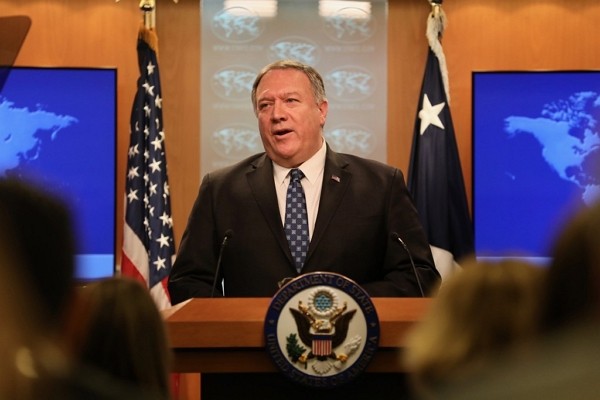 TAIPEI (Taiwan News) — U.S. Secretary of State Mike Pompeo reiterated on Thursday (Nov. 12) that Washington's commitment to Taiwan is bipartisan and that the country "has not been a part of China."

During an interview with American radio host Hugh Hewitt, Pompeo responded to a question about current U.S.-China tensions that Washington will continue to counter threats from the Chinese Communist Party (CCP). He said appeasing the authoritarian regime and excusing it from breaking international rules will put American jobs and security at risk.

Pompeo said it is important that the CCP does not regulate global telecommunications infrastructure through its companies, such as Huawei and ZTE. He added that 50 countries have joined the U.S. Clean Network initiative to construct transparent 5G networks and exclude technologies linked to the Chinese military.

When asked about Beijing's alleged plan to take Taiwan by force, the secretary of state emphasized that the U.S. has recognized Taiwan as a separate entity from China for more than 35 years — since the Reagan administration. He said both the Democratic and Republican parties have held a similar stance on the topic and have agreed to defend Taiwan's democracy.

Pompeo pointed out that the Trump administration has approved several weapon sales to the country to enhance its defense capabilities against a potential Chinese attack. He expressed hope that Washington's support for Taiwan will continue until the cross-strait issue is resolved.

Meanwhile, Pompeo acknowledged Hewitt's remark that many institutions in the U.S. have received funding from the CCP. He said the government has taken strong measures to eliminate Chinese infiltration, including by shutting down Confucius Institutes and the Chinese consulate in Houston.

However, he admitted that there is still room for improvement. He said legislators and other government officials in the U.S. must understand the cost of taking money from the CCP and how much of a threat this poses to the American people, reported CNA.