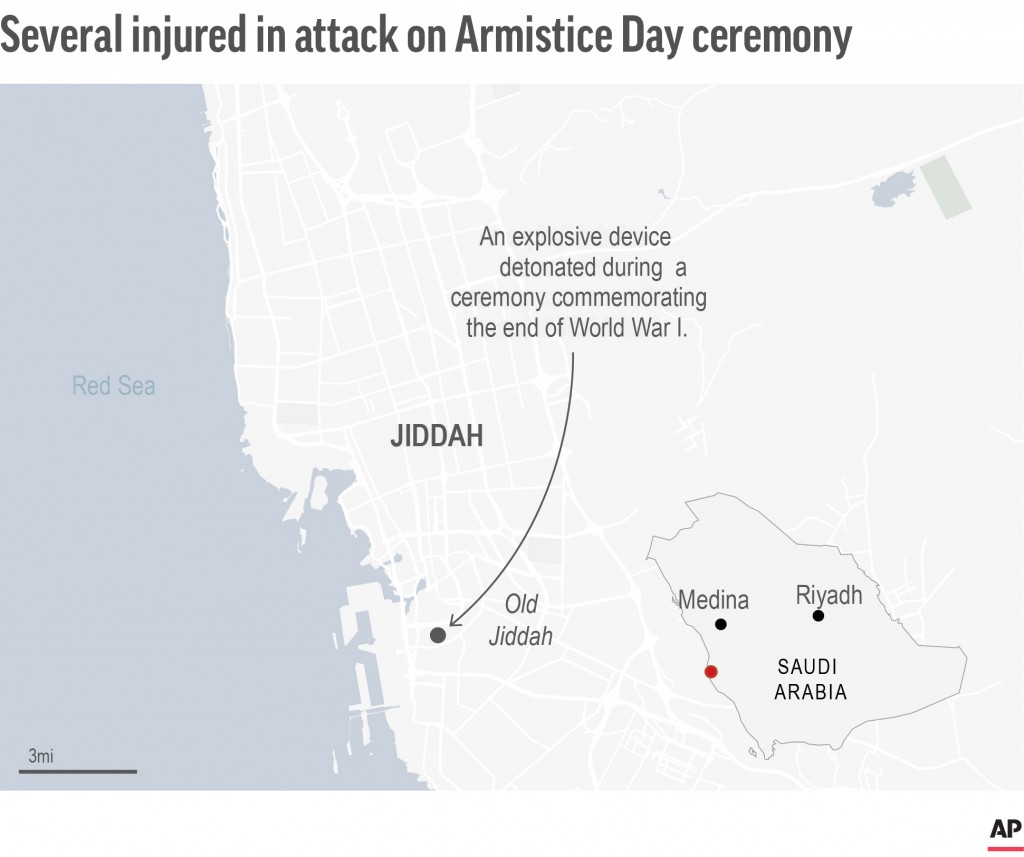 BEIRUT (AP) — The Islamic State group claimed responsibility on Thursday for the explosion the previous day at a cemetery in Saudi Arabia where American and European officials were commemorating the end of World War I. The blast wounded three people.

IS said in a post on its online Telegram channel on Thursday that its fighters were able to plant the explosive device at the Non-Muslims Cemetery in the kingdom's coastal city of Jiddah.

In a statement posted on one of its Telegram channels, IS said a group of its militants were able to plant the explosive devise at the in the city of Jiddah. It provided no evidence but said the device went off when diplomats from “the Crusader countries” had gathered there.

Some 20 people of different nationalities were attending the ceremony. Wednesday marked the 102nd anniversary of the armistice ending World War I, a day that was also commemorated in several European countries.

The bombing followed a stabbing attack last month that lightly wounded a guard at the French Consulate, also in port city of Jiddah.

France has been the target of three attacks in recent weeks that authorities have attributed to Muslim extremists. An Islamic State sympathizer also carried out a deadly attack in Austria earlier this month.

The Saudi Arabian Embassy in The Hague was sprayed with gunfire early on Thursday, leaving bullet holes across the facade and in several windows. Nobody was hurt, according to the Dutch police.

The recent attacks included the beheading of a French teacher outside Paris who showed caricatures of the Prophet Muhammad to his class. Three people were later killed in a church in the southern city of Nice.

The depictions of the prophet sparked protests and calls for boycotts of French products among some Muslims in the Middle East and South Asia.

The Non-Muslim Cemetery sits nears Jiddah's docks, hidden behind trees alongside a major thoroughfare in the city. The Commonwealth War Graves Commission — which maintains places of commemoration for military service members from British Commonwealth nations — shows just one soldier buried at the cemetery, Pvt. John Arthur Hogan, who died in June 1944.

The Islamic State group has not carried out any large scale attacks in the kingdom since 2015. That year, an IS suicide bomber attacked a mosque inside a police compound in Abha, 350 miles south of Mecca, killing 15 people in the deadliest attack on the kingdom’s security forces in years. Eleven of the dead belonged to an elite counterterrorism unit whose tasks include protecting the hajj pilgrimage.