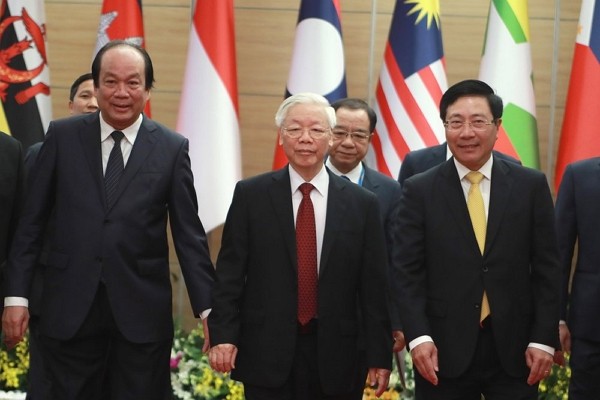 Southeast Asian leaders kicked off a multilateral summit on Thursday (Nov. 12) expected to address tensions in the South China Sea and tackle plans for a post-pandemic economic recovery in a region where U.S.-China rivalry has been rising.

The Association of Southeast Asian Nations (ASEAN) has so far not been “drawn into the maelstroms” of those rivalries and challenges to the international multilateral system, Vietnamese Prime Minister Nguyen Xuan Phuc said in his opening remarks at the 37th ASEAN Summit in Hanoi.

“Three quarters of a century have passed since the end of the Second World War. World peace and security, however, are not yet truly sustainable,” said Phuc, whose government holds the chairmanship of the 10-member bloc.

“This year, they are particularly under greater threat as a result of compounding risks arising from the unpredictable conduct of states, major power rivalries and frictions,” Phuc said at the virtual summit, which also includes meetings between ASEAN and China, India, Japan, South Korea, Australia and the United States.

High on the summit’s agenda will be tensions in the South China Sea, where Chinese ships have been embroiled in periodic standoffs with vessels from Vietnam, Malaysia and Indonesia as Beijing seeks to assert its territorial claims in the disputed waterway.

China claims about 80% of the sea including large swathes of Vietnam’s exclusive economic zone, or EEZ, as well as the Paracel Islands and Spratly Islands. It also overlaps the EEZs of ASEAN members Brunei, Indonesia, Malaysia and the Philippines.

Since mid-August, the United States has repeatedly riled China by sending warships to the South China Sea and has blacklisted 24 Chinese entities over their involvement in building and militarising artificial islands.

Chinese Premier Li Keqiang pledged Beijing would “continue to work with ASEAN countries on the path of peaceful development to uphold peace and stability in the region”.

Describing the coronavirus pandemic as the “defining challenge of our generation”, Philippine President Rodrigo Duterte urged countries to “work together to ensure that all nations – rich or poor – will have access to safe vaccines”.

ASEAN leaders are also expected to sign the China-backed Regional Comprehensive Economic Partnership (RCEP) on Sunday in what could become the world’s biggest trade agreement.

The deal, which comes at a time when tensions over the U.S. election result leave questions over Washington’s engagement in the region, will likely cement China’s position more firmly as an economic partner with Southeast Asia, Japan and Korea, and put it in a better position to shape the region’s trade rules.