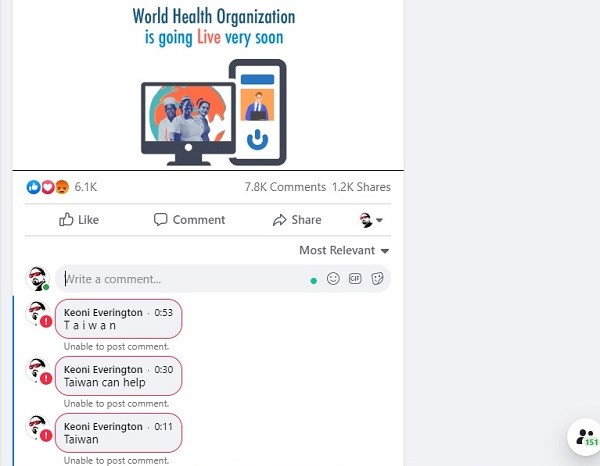 TAIPEI (Taiwan News) — With the World Health Assembly (WHA) having resumed its 73rd session, a Taiwanese politician on Thursday (Nov. 12) noticed that when he typed the word "Taiwan" in the comments section for its streaming video of the event, the message was immediately blocked.

As was the case with the first session of the 73rd WHA in May, Taiwan is being excluded from the session taking place from Nov. 9 to 14, despite its extraordinary handling of the outbreak. On Thursday morning, Taiwan Statebuilding Party (TSP) Legislator Chen Po-wei (陳柏惟) noticed that "Taiwan" had been blocked in the comment section below the Facebook streaming video of the latest WHA meeting.

When the term is blocked, an exclamation point appears next to the commenting user's profile picture, and the words "Unable to post comment" surface below. Taiwanese netizens soon began experimenting and found that "Taiwan can help," "China virus," and "Wuhan virus" are also blocked.

At first, netizens found that typing the letters separately — "T a i w a n" — or jammed together — "Taiwancanhelp" — would avoid detection. However, the censors soon caught on, with even alphanumeric versions such as "Ta1wan" getting rejected.

Undaunted, Taiwanese netizens started typing "Taiwan (台灣)" and other banned terms such as "China Wuhan Pneumonia" (中國武漢肺炎) vertically in Chinese characters. These were soon blocked as well, but at the time of publication typing "Tai. wan" (台。灣) in both English and Chinese is still evading WHO censors.

Many Taiwanese netizens were angered by the WHO's apparent deference to Beijing:

"Remarks are censored to this level. Even this kind of criticism is not allowed. Netizens are not allowed to talk about corruption."

"What if everyone changed their account names to 'Taiwan can help?' Would they get banned?"

At 8 a.m. on Thursday, Taiwan’s Representative to the U.S. Hsiao Bi-khim (蕭美琴) wrote on Twitter that if the censorship is happening, "it would be an outrage to see the WHO and Facebook teaming up to do China's dirty work of censoring the success story in the fight against COVID-19." At the Legislative Yuan that same day, Foreign Minister Joseph Wu (吳釗燮) told the media that Taiwan is dissatisfied with the WHO's actions and has lodged a protest. "Tai. wan" is the only version not yet blocked: (Facebook, WHO screenshot)

Live streaming video in which WHO is blocking comments about Taiwan: