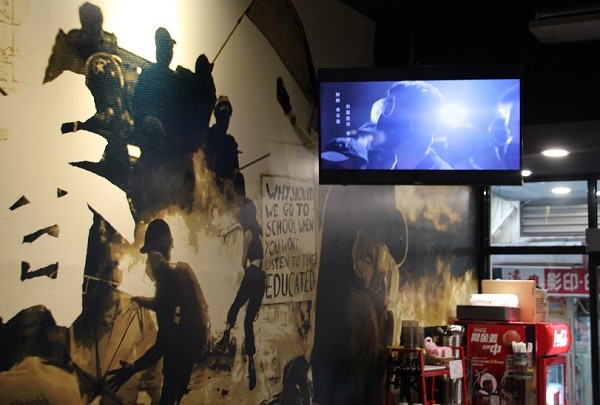 TAIPEI (Taiwan News) — A Taipei restaurant employing Hongkongers living in exile has reopened more than three weeks after it was vandalized with chicken feces by men who received payment from a Chinese national.

On Oct. 16 at around 12 p.m., a 25-year-old Taiwanese man surnamed Mo (莫) walked into Aegis (保護傘), a Hong Kong protest-themed restaurant in Da'an District, with a bucket of chicken manure, which he proceeded to dump all over the counter, kitchen, and a female employee before beating a hasty retreat.

Aegis staff immediately set to the task of cleaning up but said the attack resulted in considerable losses. The employees have been paid their usual wages in the intervening weeks, according to the eatery.

Taipei police have since arrested four Taiwanese men in connection to the incident on the charges of destruction of property, intimidation, and public insult. The suspects reportedly told police they had been hired by an as-yet-unknown Chinese man. According to details gleaned during questioning, the Chinese national got in touch with a Taiwanese man living in China surnamed Chen (陳).

Chen allegedly contacted one of the suspects, a man named Lee Chao-hsin (李昭信), transferring NT$30,000 (US$1,051) to his account as payment for the attack. Lee and his brother gathered manure left by livestock outside the city.

Pretending to be customers, the Lee brothers sat at a table in Aegis while Mo carried out the attack. A fourth man, Chiang Chi-jung (江啓榮), recorded the attack from outside, apparently to prove it had taken place.

The four remain in police custody.

Aegis declined to comment on the reopening but wrote on their Facebook page that the incident "only makes us stronger" and that "intimidation will drive us forward with our heads held high."