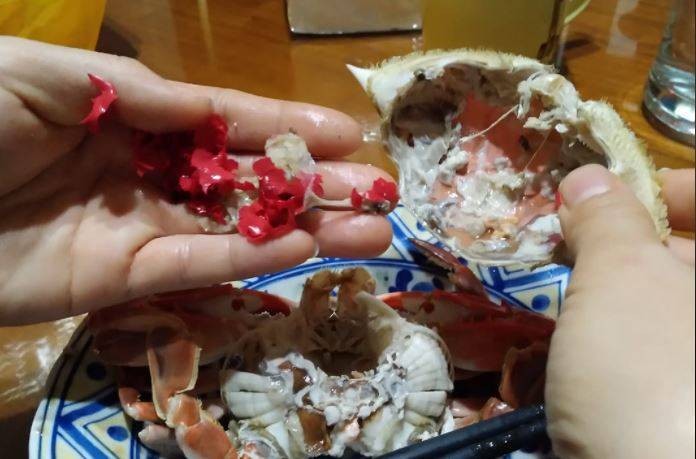 TAIPEI (Taiwan News) — While dining on crab earlier this week, a Taiwanese woman discovered to her horror that the crustacean was filled with chunks of red plastic.

On Monday (Nov. 9), a user of the Facebook page Baoyuan 2 Commune (爆怨2公社) posted photos and video of large chunks of red plastic she claims were inside a crab she had been eating. In the video, the woman can be heard explaining that as she was eating the crab, she plucked out its stomach, which she mistook for an egg sack.

When she started to bite down on it, she noticed there were inedible objects inside, and she started to toss them aside. When she glanced down at her hand, she was shocked to see a wad of bright red plastic.

She quickly took out her smartphone and shot a video of the strange objects. She said that the plastic was a bit elastic, similar to the material used in balloons.

The woman surmised that the crab had eaten plastic it had encountered on the seabed. She then implored the public to stop littering.

UDN cited Ho Ping-ho (何平合), an associate professor at the National Taiwan Ocean University Department of Environmental Biology and Fisheries Science, as saying that since he could not see the complete process of shelling the crab, it is difficult to judge the actual situation. "If it is true, that means the problem with ocean plastic pollution is quite serious," said Ho.

Ho said that in the past, there have been many cases in which sea turtles mistook plastic bags for jellyfish and ingested them. He said it cannot be ruled out that the crab also ate the plastic by mistake, thinking it was a food source.

The professor pointed out that crabs normally eat green algae and swallow objects that resemble algae. It is possible that the crab mistook the chunks of brittle plastic for algae.

Unfortunately, Ho said that once the crab swallows the plastic waste, it can never digest or excrete it, and it will remain in its stomach forever. 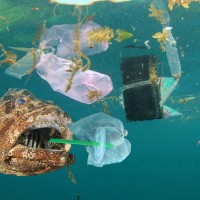 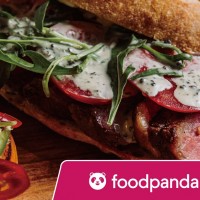