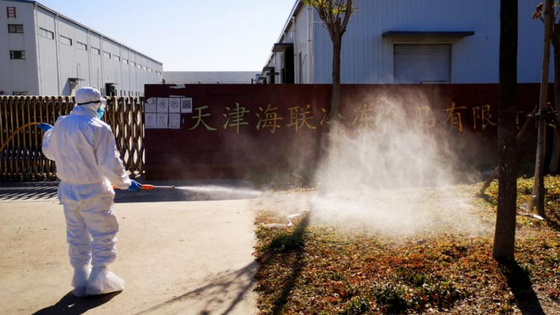 China's National Health Commission on Monday (Nov. 9) claimed that its sole local coronavirus case in the country that day was in the city of Tianjin, which has entered "combat" mode as a result. The infected person was identified as a 38-year-old male employee of Tianjin Hailian Cold Storage Co. Ltd., which is located in the Binhai New Area, according to China's state-run mouthpiece CGTN.

At a news conference on Sunday (Nov. 8), Tianjin officials announced that the cold storage worker had no history of having come in contact with persons infected with the coronavirus. However, they stated that he had come in contact with imported frozen food over the past two weeks.

After an investigation was carried out, samples from a batch of frozen pork knuckles from Bremerhaven, Germany, tested positive for COVID-19. The batch first arrived at the Tianjin Port Pacific International Container Terminal on Oct. 19 and was transported to the Tianjin Hailian Cold Storage in Binhai New Area, where it was unpacked, unloaded, and placed in cold storage.

On Nov. 5, the frozen products were loaded into vehicles to be transported to the city of Dezhou in Shangdong Province. Tianjin city officials on Nov. 6 then received notice from Dezhou that samples of food packaging shipped in from the port had tested positive for the coronavirus.

After testing was carried out on the cold storage facility, only a door handle was found to have traces of the virus, while tests on other environmental samples all came back negative.

Thus far, 11 persons who came in contact with the worker in Tianjin have officially tested negative for the coronavirus. The cold storage facility has been sealed off and 156 persons who live in the same apartment building as the worker have taken the polymerase chain reaction (PCR) tests and are awaiting the results.

The latest incident is part of a pattern of the Chinese government blaming new outbreaks on imported frozen food. In June, the communist regime initially blamed an outbreak at Beijing's Xinfadi Market on frozen salmon from Norway, but both China and Norway later concluded that salmon products were actually not the culprit.

Scientists in the West have expressed skepticism that the coronavirus can be readily spread to humans through frozen food products. The U.S. Centers for Disease Control in August stated that there is "no evidence to suggest that handling food or consuming food is associated with COVID-19."