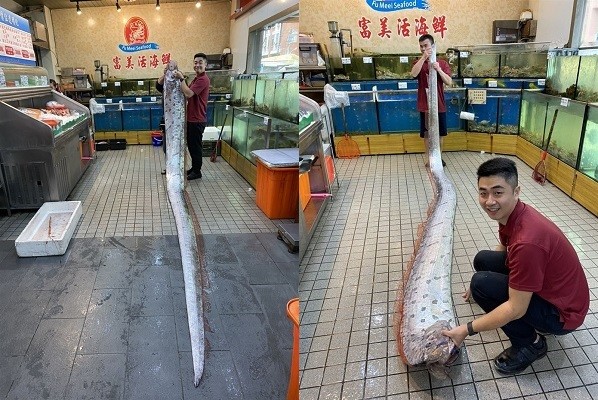 The oarfish was 490 centimeters long and weighed about 45 kilograms. It was caught off the coast of Dong'ao in Yilan County.

The owner of Fumei Huo Seafood Restaurant (富美活海鮮餐廳) purchased the fish for NT$16,000 (US$560). Chen Kuo-pin (陳國濱) was cited by Liberty Times as saying that it was the longest "earthquake fish" (地震魚) he had ever seen.

Oarfish are called "earthquake fish" in Taiwan because according to local lore, they surface from the deep just before a major earthquake. Chen said that one kilogram of meat from the fish can sell for NT$400, is "more tender than tofu," and is suitable for steaming. Chen said fishing nets are usually cast between early morning and late evening. He speculated the leviathan may have been caught in the net late at night.

He said the fishermen claimed the it was still alive when they arrived at port. However, because it is a deep-sea fish, it cannot survive for long in a tank.

Chen claimed that it was the largest fish of its kind ever caught in the Yilan area. Many local fishermen corroborated his statement. Chen has run his seafood restaurant for 55 years. Customers were reportedly amazed at the size of the sea creature.

When asked if he believed the fish had surfaced because of the earthquakes that struck that day, Chen responded by saying "that's for the experts to clarify."

Chen then explained that many oarfish are caught every year in Yilan but that they are usually about 100 to 200 cm in length. "Nearly five meters is very rare."

He said the meat, which usually sells from NT$300 to NT$400 per kg, can be scooped up with a spoon after it is steamed.