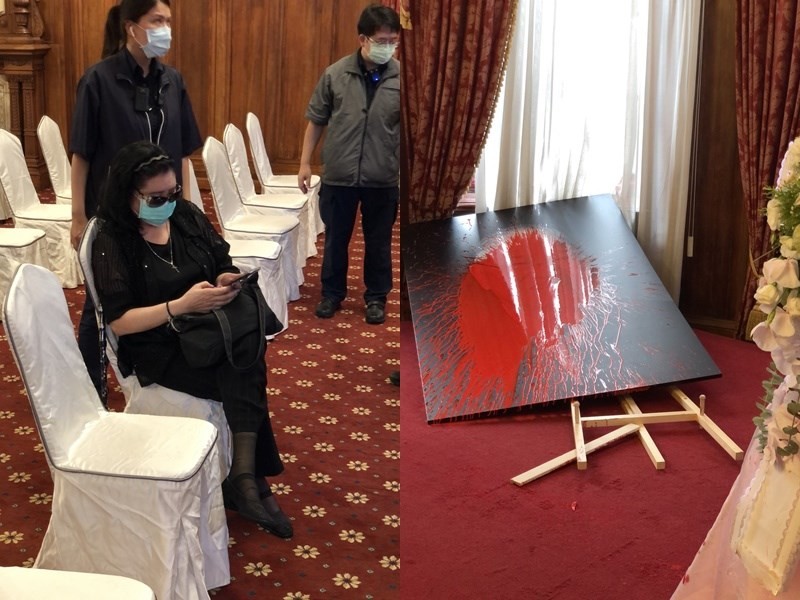 Taipei prosecutors on Friday indicted a woman for splashing red paint on a portrait of former President Lee Teng-hui (李登輝) at a public memorial at the Taipei Guest House in August.

Cheng Hui-chung (鄭惠中), a local entertainer, was charged with publicly interfering with a public memorial and could face either a fine of no more than NT$9,000 (US$315) or imprisonment of less than six months.

She was also charged with destruction of private property, which carries a fine of no more than NT$15,000 or a prison sentence of less than six months, the Taipei District Prosecutors Office said.

The case stems from an incident on Aug. 14, when Cheng was caught hurling a balloon containing red paint at Lee's photograph during a public memorial service in honor of the late president, who died on July 30.

During the attack, some of the paint also splattered various nearby items, including a white interior pillar.

She was immediately taken into custody by local police.

According to Taipei prosecutors, the 68-year-old Cheng vandalized the photograph because she disagreed with Lee's politics.

However, they said Cheng will not be charged for violating the Cultural Heritage Preservation Act because it is difficult to determine whether she intended to damage the pillar.

People charged with violating the Act and vandalizing a historical building or its affiliated facilities could face a jail sentence of six months to five years, coupled with a fine of NT$500,000 to NT$20 million.

In January last year, Cheng was detained and investigated for slapping then-Culture Minister Cheng Li-chiun (鄭麗君) at a banquet for veteran entertainers.

She was charged with obstructing government administration, but those charges were dropped by prosecutors in July 2019 because the offense was considered minor and the banquet was a private event. (By Lin Chang-shun and Ko Lin)