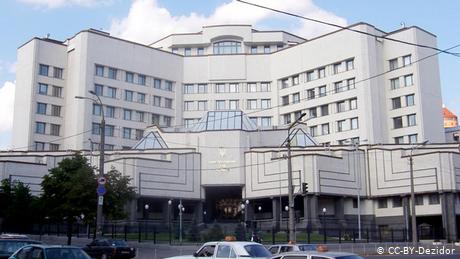 In October, Ukraine's Constitutional Court ruled that anti-graft laws adopted in 2015 are largely unlawful. The legislation mandated that public officials — including Constitutional Court judges — must declare foreign and domestic assets or risk incarceration and were meant to address the fact that the political elite had amassed shell companies in tax havens, villas, yachts, copious amounts of cash, luxury cars and precious jewels in recent decades.

Under the laws, citizens would have been entitled to inquire about the nature and origin of these assets. And Ukraine's newly established independent anti-graft bodies were empowered to investigate cases of suspected illegal enrichment.

Ukraine's Constitutional Court sided with 47 members of parliament who represent the pro-Russia opposition platform and filed a legal complaint against the anti-graft laws, citing privacy concerns. The lawmakers are fiercely critical of the legislation — as well as of the government's efforts to align with the European Union rather than with Russia.

In 2003, the court gave President Leonid Kuchma the go-ahead to run for a third term, even though the constitution is unequivocal about limiting the post to two. In 2010, the court overruled amendments to Ukraine's constitution that a parliamentary majority had decided on in 2004 to limit presidential powers.

Viktor Yanukovych, the president at the time, and his leadership circle would ultimately be forced into exile in Russia in 2014 after a public uprising — paving the way for a new chapter in Ukraine's history. Several judges who had been appointed by Yanukovych would remain in office after his ouster, however, and many have since made headlines for striking down efforts to bring Ukraine in line with international norms as unconstitutional.

World leaders had urged Ukraine's government to take action against the country's notoriously corrupt elite. Indeed, the International Monetary Fund — Ukraine's primary lender — had made this a condition for loans. And the European Union had demanded greater transparency as a condition for signing the 2014 Association Agreement, which entailed the creation of a free trade zone. Ukraine's anti-corruption efforts were further rewarded when citizens were granted visa-free travel to Schengen states in 2017.

"We will lose the support of our partners if we fail to address this problem soon," Foreign Minister Dmytro Kuleba warned after the Constitutional Court scrapped the anti-graft laws. Matti Maasikas, the EU ambassador to Ukraine, called on lawmakers to continue fighting corruption and continue honoring the country's international agreements.

National Security and Defense Council Secretary Oleksiy Danilov called the ruling "part of a plan to undermine the Ukrainian state and its westward integration."

On October 30, more than 1,000 activists gathered outside the Constitutional Court to protest the ruling and call for lawmakers to reinstate the anti-corruption legislation and continue Ukraine's path toward relations with the European Union. That very day, Ukrainian President Volodymyr Zelenskiy presented a bill to annul the ruling, sack Constitutional Court justices and appoint new judges through a novel selection procedure.

Ukraine's constitution does not permit parliament to dismiss top judges, and the Centre of Policy and Legal Reform has warned that Zelenskiy's proposal could have unpredictable consequences. The CPLR warns that dismantling the Constitutional Court could seriously harm the government and set off a spiral of institutional self-destruction. This, according to the CPLR, would be even more dangerous than if the Constitutional Court were simply to lose legitimacy after the ruling in October.

Few parliamentarians back the bill put forward by Zelenskiy, who was elected in 2019. During the first plenary session following the Constitutional Court's ruling, pro-EU opposition lawmakers cautioned that the proposal could grant Zelenskiy disproportionate power. They therefore called for the country's anti-graft laws to be amended and adopted once more. Several members of Zelenskiy's ruling Servant of the People party, which came to power in 2019, have also refused to endorse the bill.

Former Prosecutor General Ryaboshapka and other anti-corruption activists are calling for swift action and for the Constitutional Court judges to be replaced through a transparent selection process. "Many lawmakers in parliament want exactly that," Ryaboshapka said. "They want to adopt new laws that would be unlawful according to the Constitutional Court ruling. This is hanging over our heads like the sword of Damocles, and it weakens unpopular anti-corruption efforts."

This article was adapted from German by Benjamin Restle.