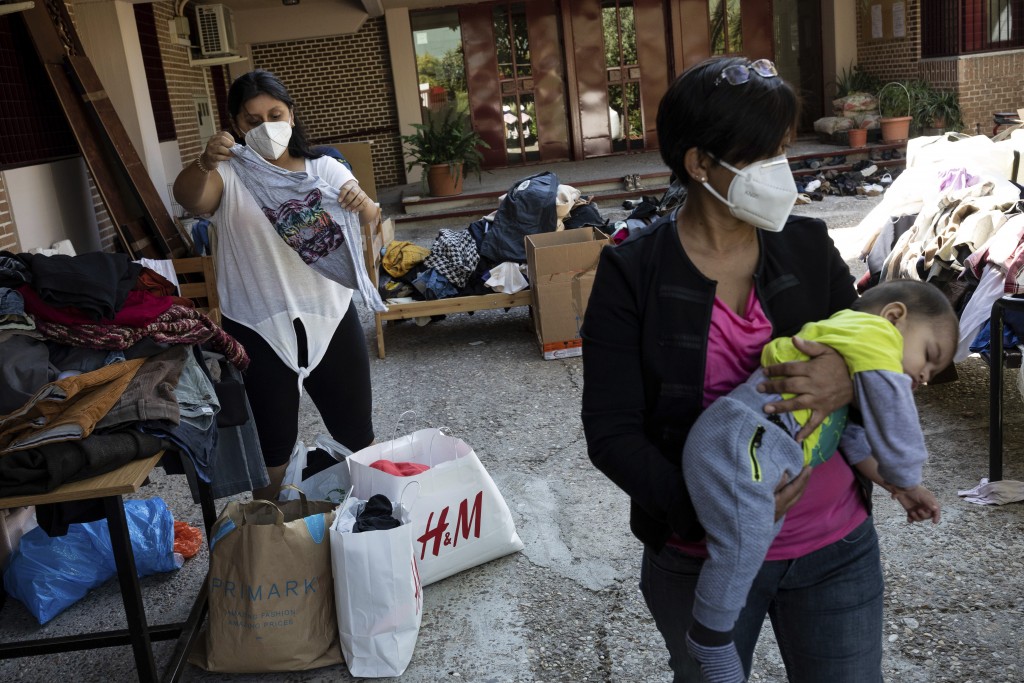 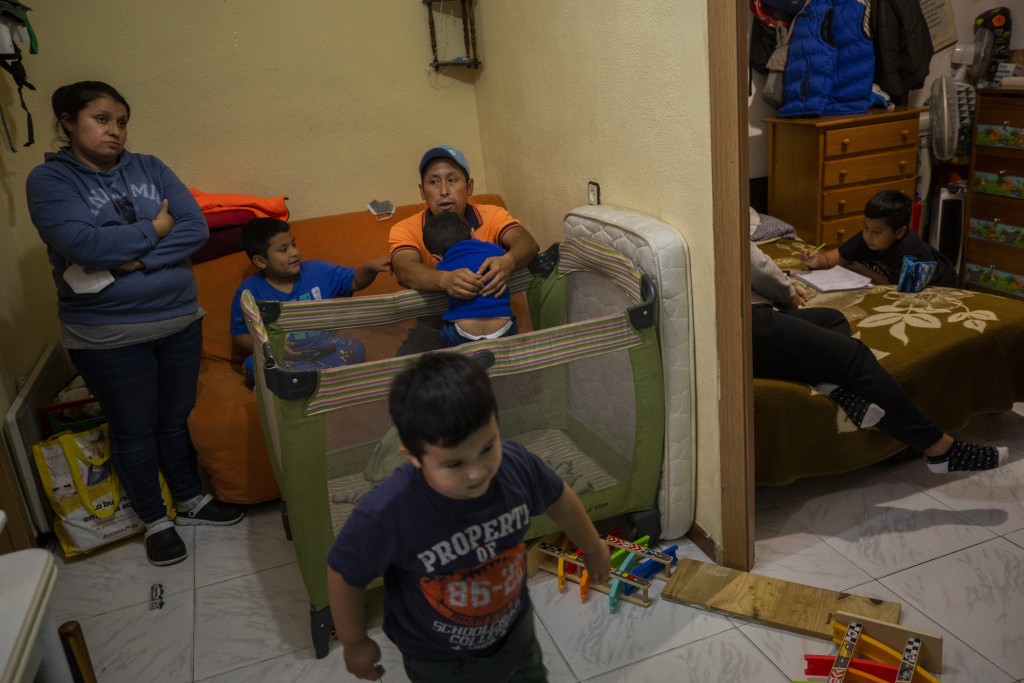 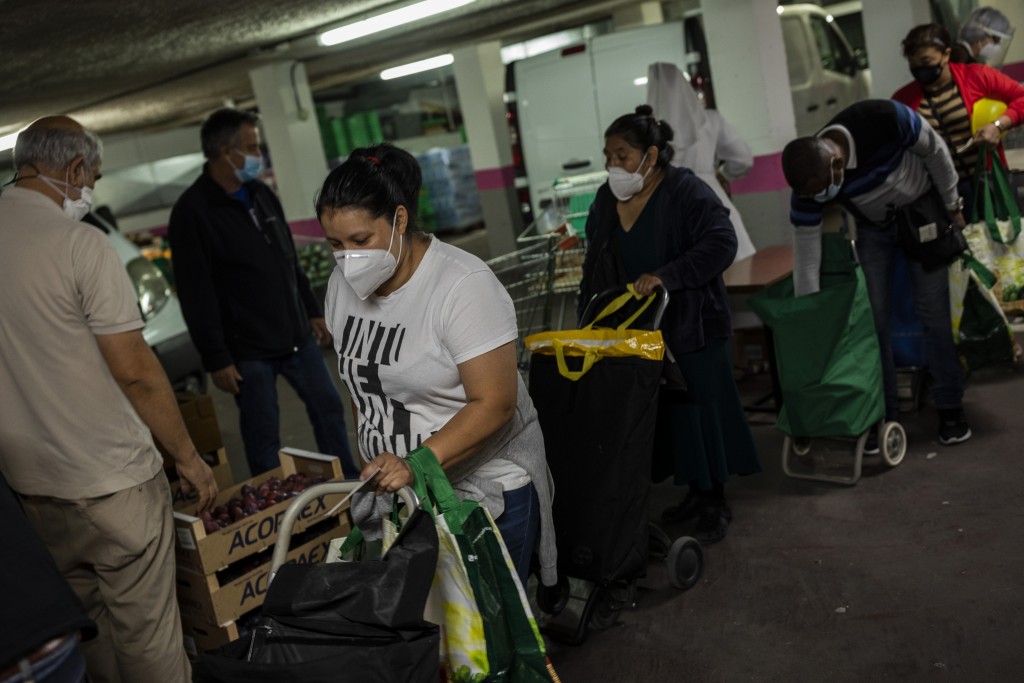 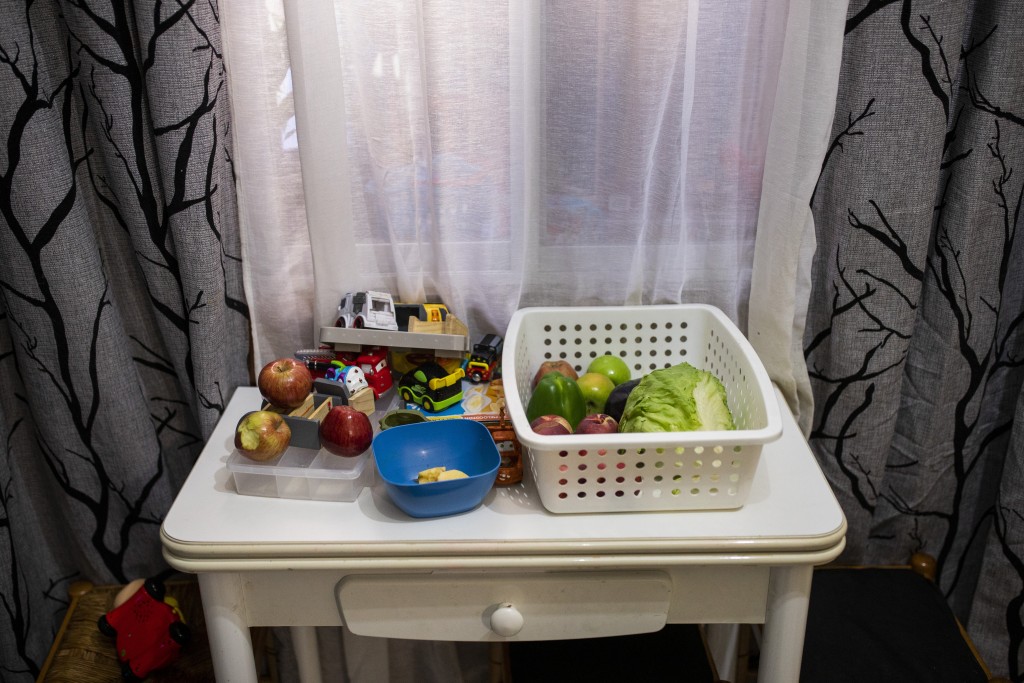 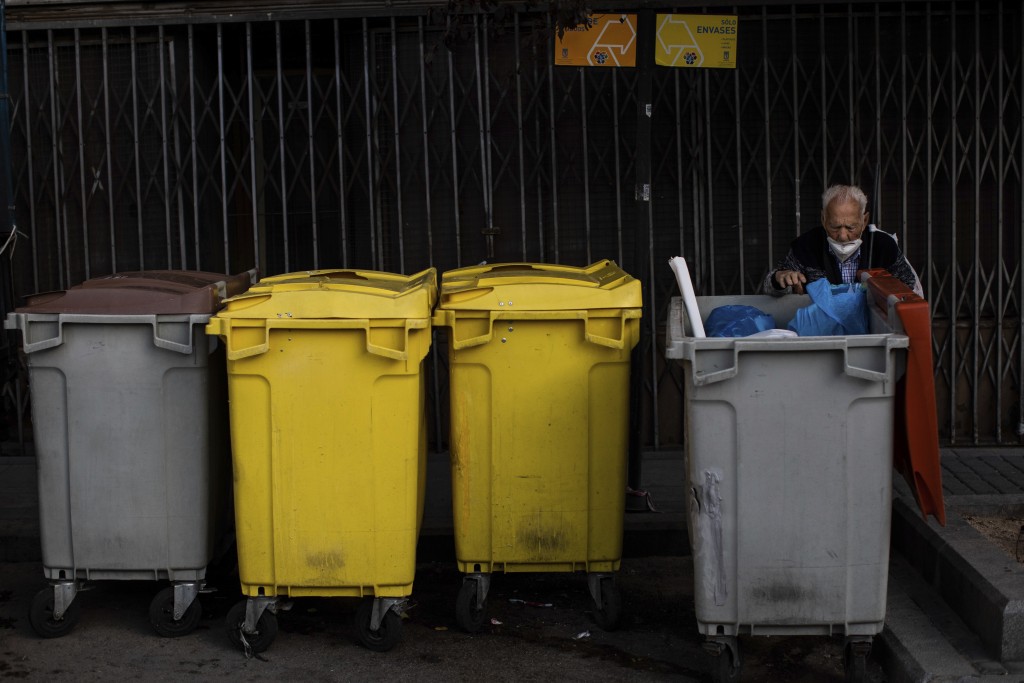 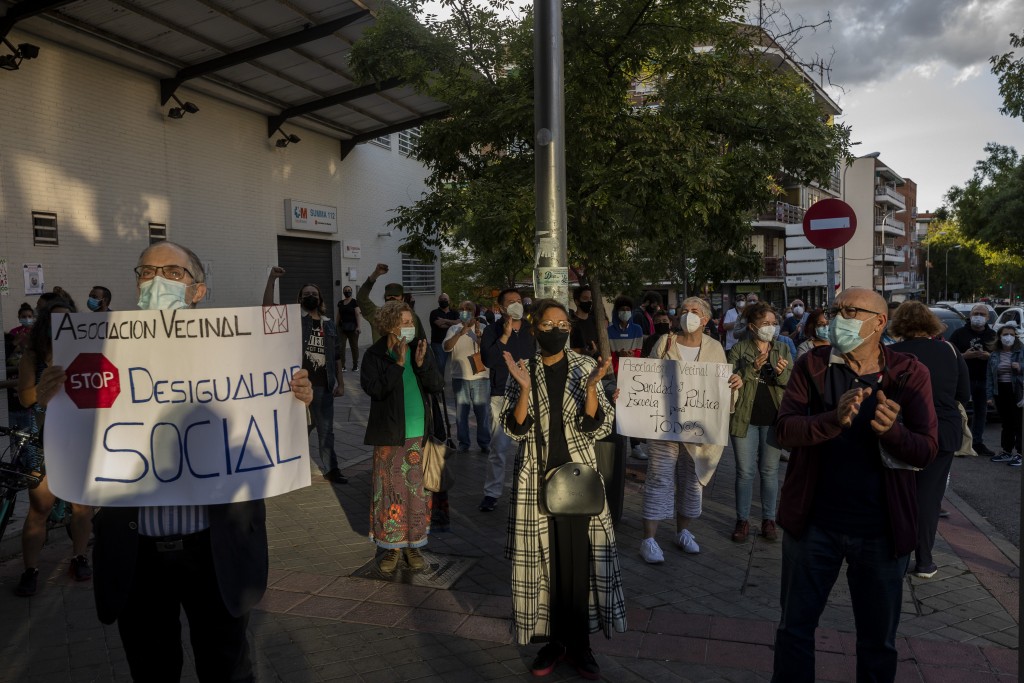 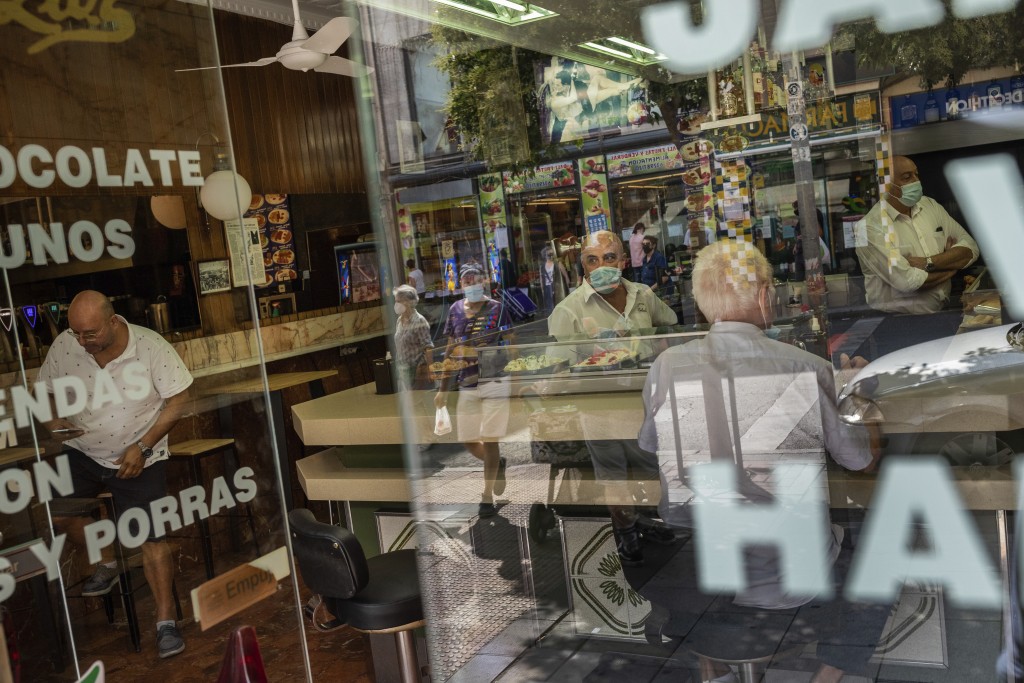 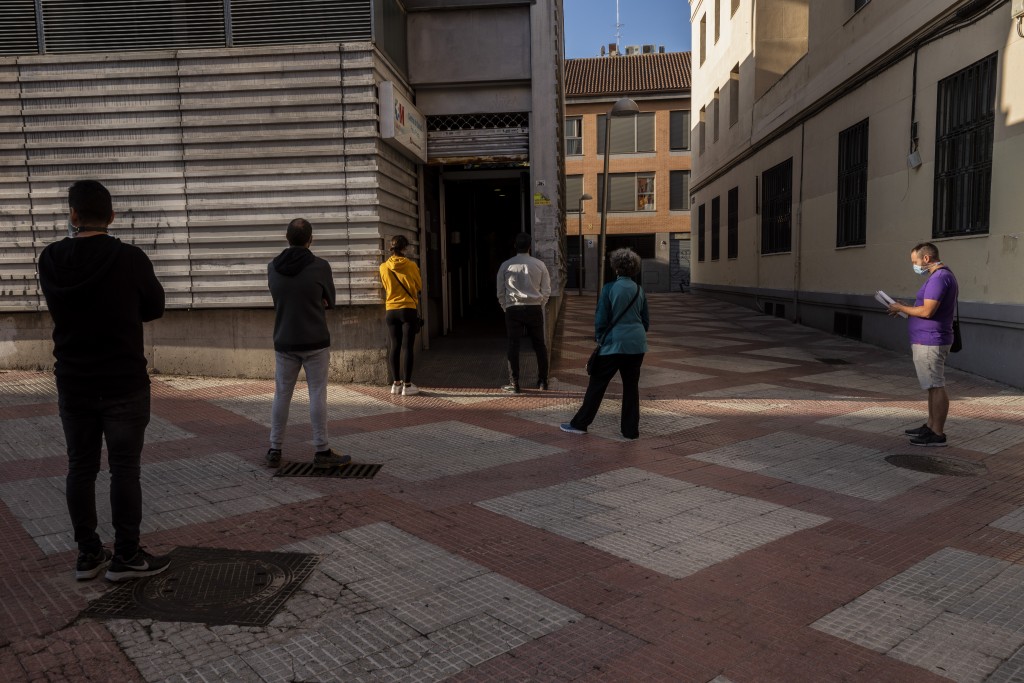 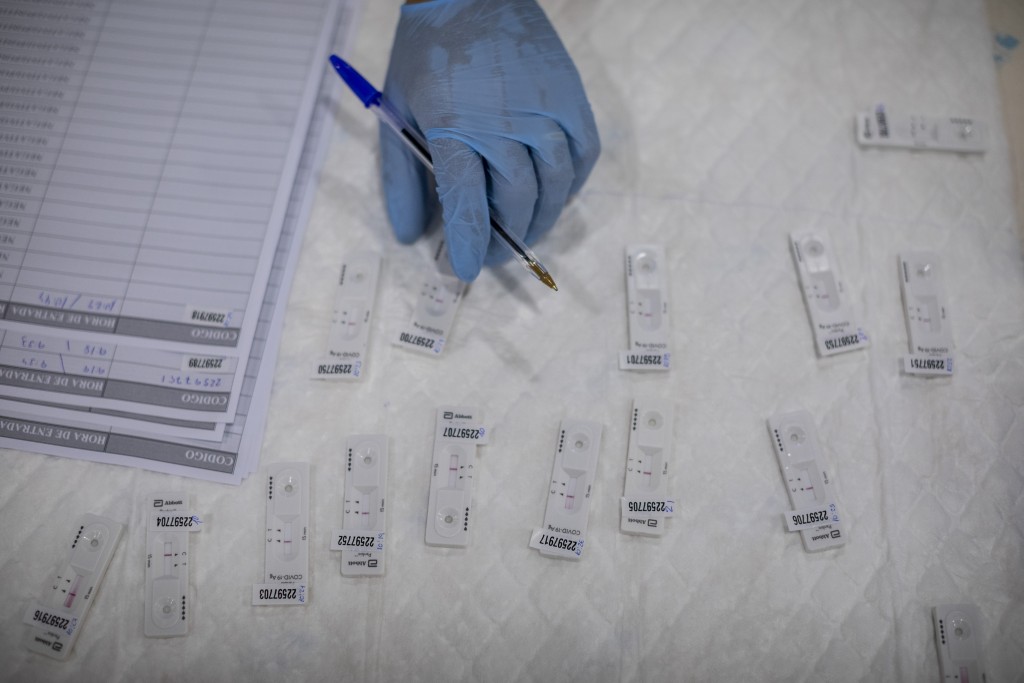 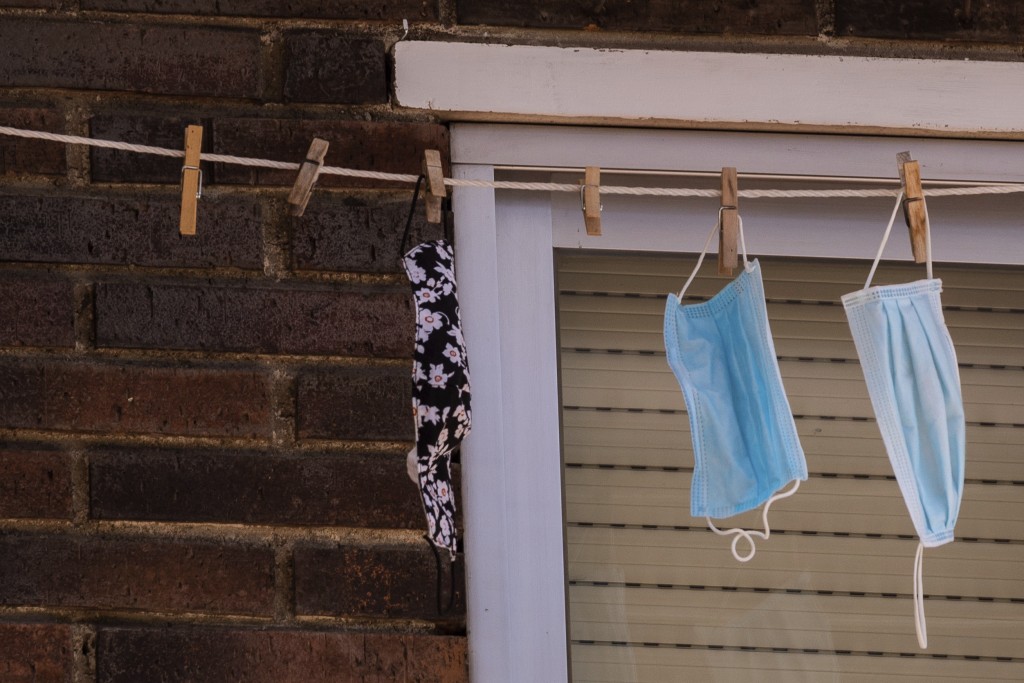 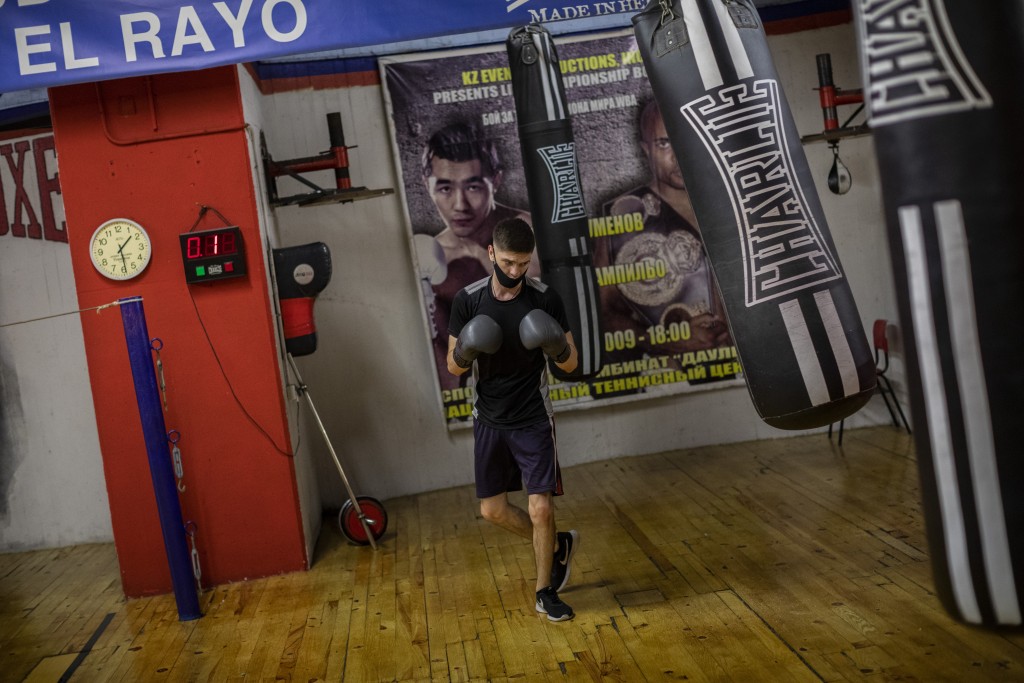 She spends a couple more at the social worker’s office with her 8-year-old son, who has autism. She waits on the phone to the health center or when she wants to check if her application for a basic income program will get her the promised 1,015 euros ($1,188).

“They are always asking for more papers but we still haven’t seen a euro. Everything seems to be closed because of the pandemic. Or you are told to go online,” said Oliva. She managed to apply online, but others in her situation don’t know how to use a computer or simply don’t have one.

“Poor people queue. It’s what we know how to do best,” Oliva said.

Lower income families around the world have suffered disproportionately from the pandemic for a number of reasons: their jobs might expose them more to the virus and their savings are typically lower. In Spain, their situation has been worse than in much of the rest of Europe due to the particularly big role of industries like tourism and relatively weak social welfare benefits.

“The pandemic is extending and intensifying poverty in a country that already had serious inequality problems,” said Carlos Susías, president of the European Anti-Poverty Network, which encompasses dozens of non-profits. He says insufficient welfare spending, too much red tape, lack of access to technology and a resurgence of the pandemic are likely to widen what is already one of the developed world's biggest gaps between rich and poor.

In Spain, over 38,000 have died and more than 1.2 million have contracted the virus, according to a tally by Johns Hopkins University, although the real infection tally could be at least three times higher. Contagion has spread faster in densely populated working-class neighborhoods like Vallecas in southern Madrid, where Oliva’s family of seven share a 35 square-meter (375 square-foot) street-level apartment.

Manual workers like her husband, many in essential jobs and commuting on public transportation, are at greater peril of infection. The pandemic’s impact on the economy has also stung them, pushing their living standards into a downward spiral.

It’s what many experts are describing as a “K-shaped” economic recovery. The affluent will be able to weather the storm - many of them working from home - while the most vulnerable lose the few gains made since last decade’s financial crisis.

Spain’s government expects the economy to contract 11.2% this year, while the International Monetary Fund puts the drop at 12.8%, the highest rate among developed economies.

Lara Contreras, an activist with the Intermón Oxfam aid group, said the Spanish economy is more vulnerable due to its reliance on construction and tourism, where labor wages have been squeezed.

When the pandemic hit, halting much of the global travel, 1 million people lost their jobs in Spain, and the unemployment rate hit 16.3% in September.

The government has supported the wages of some 3.4 million workers and is still keeping 600,000 under its national furlough scheme. The coalition of Socialists and the far-left led by Prime Minister Pedro Sánchez is heralding what he calls an “ambitious” and “progressive” re-activation of the economy largely relying on billion of euros from the EU’s recovery fund.

But experts warn that Spain needs to correct a dysfunctional job market, which is plagued with temporary and part-time contracts. Women and migrants tend to have the least job security, according to a survey by the main Catholic charity. And yet, only one in four vulnerable households were receiving a government subsidy last year, Cáritas found.

The pandemic can lead to a “totally broken economy,” said Contreras. Her organization, Oxfam, has warned that the number of Spaniards who live on less than two dollars a day could rise by 1.1 million from the current 9.8 million unless more is invested in health care and social protection and the government broadens its flagship basic income scheme.

That program was touted in April as a way to help as many as 2.3 million families living under extreme poverty. Although more than 1 million have applied for the support, only half of the requests have been processed and 136,000 applicants have been granted the subsidy. Regional governments, meanwhile, have taken the opportunity to save on similar programs to reduce poverty.

“The political decision was right, but its execution it has been hellish,” Contreras said.

Take Oliva’s case. When her husband lost his job delivering milk to bars and restaurants in April, the family also lost a regional subsidy of 300 euros ($347) for those who work but struggle financially.

While surviving on a small unemployment benefit, Oliva then applied for the new national subsidy. More than six months later, she has yet to see any of the money. She’s also been told that she can’t apply to get the regional allowance back. And although her husband has found work delivering beer, the family is facing a potential 100-euro rent hike.

Perhaps more worryingly, competition at soup kitchens is getting fiercer. At the Servants of Jesus monastery in Vallecas, each family can now only receive food handouts once a week instead of three times, Oliva explains as she pulls zucchinis, carrots, apples, washing powder and a dozen milk cartons from her groceries’ cart.

“We are now living from day to day,” she said.

The lines have also been getting longer at the Somos Tribuk community pantry, one of the many grassroots networks that have popped up to help people in Vallecas. Volunteers gathered in a warehouse recently to sort out donations of food, diapers, oil and cleaning products.

Fernando Fernández Diego, who at 69 has found himself with no pension and unable to sell garlic cloves in the market as he did before the pandemic, said his household of six adults and three children now survive entirely on food handouts.

As he pulled a shopping cart with donated goods, Fernández said with politicians “quarreling all the time” while the virus spreads, he had little trust in any government help for his family.

“Only the people will save other people,” he said.