TAIPEI (Taiwan News) — While votes for the U.S. presidential election were being counted, Taiwanese Vice Premier Shen Rong-jin (沈榮津) said Wednesday (Nov. 4) that Taiwan's technology firms will continue to exit China regardless of the outcome.

During a breakfast meeting hosted by Taiwan's Chinese National Association of Industry and Commerce, Shen revealed that the consensus among local high technology companies is to continue withdrawing from the Chinese market. He said the departure of Taiwan technology firms from China will resume, but its speed will be affected by who wins the U.S. election.

While people in Taiwan's high-tech industry are determined to reduce the dependence on Chinese investment, most Taiwanese businessmen are expected to stay in China and explore bigger profits, according to Shen. He also pointed out that Taiwan will seek conversations with the U.S. under the bilateral Trade and Investment Framework Agreement (TIFA) after the new president is announced.

Economic Minister Wang Mei-hua (王美花), who also attended the meeting, said Taiwan will continue to work with both the U.S. Republican and Democratic parties. She said a "deepened Taiwan-US partnership" is inevitable, reported UDN.

Meanwhile, Taiwan Glass Group Chairman Lin Por-fong (林伯豐) advised the Taiwanese government not to lean too close to either the U.S. or China. He explained that the country should evaluate its own interests and avoid becoming a pawn in the U.S.-China trade war, reported Cnyes. 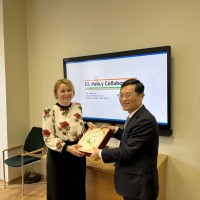