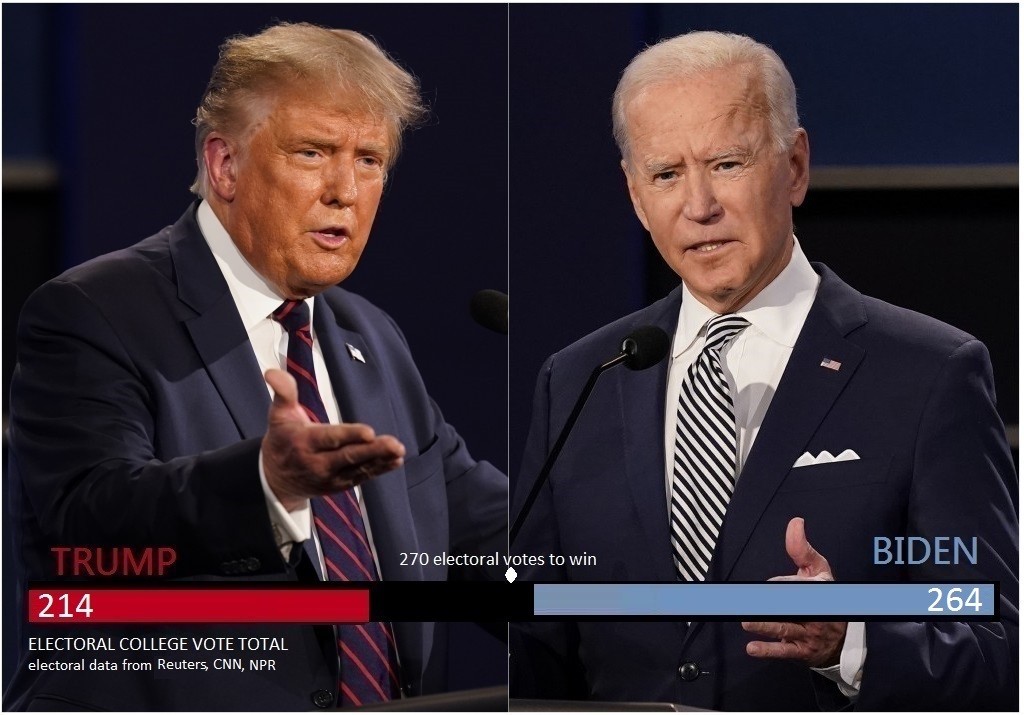 Georgia state likely to go through recount in US presidential election

Georgia’s secretary of state on Friday said he expects a recount due to the small margin for the presidential election in the battleground state, where Democrat Joe Biden has a small lead over Republican President Donald Trump.

White House in reach for Biden as he builds leads in Pennsylvania, Georgia

Joe Biden expanded his narrow leads over President Donald Trump in the battleground states of Pennsylvania and Georgia on Friday, putting him on the verge of winning the White House three days after polls closed.

Joe Biden overtook President Donald Trump in the vote count in Pennsylvania and Georgia Friday morning, closing in on a presidency that hinges on the outcome of tight contests in key battleground states.

With his re-election chances fading as more votes are counted in a handful of battleground states, U.S. President Donald Trump launched an extraordinary assault on the country’s democratic process from the White House on Thursday, falsely claiming the election was being “stolen” from him.

A crowd of Donald Trump supporters, some armed with rifles and handguns, gathered outside an election center in Arizona on Wednesday night after unsubstantiated rumors that votes for the Republican president were deliberately not being counted.

It’s still not clear yet if the next U.S. president will be incumbent Donald Trump or Democratic challenger Joe Biden, but whoever triumphs will face monumental challenges on the economic front.

U.S. Supreme Court may not have final say in presidential election, despite Trump threat

While President Donald Trump wants the U.S. Supreme Court to weigh in on a presidential race that is still too close to call, it may not be the final arbiter in this election, legal experts said.

The election scrambled seats in the House and Senate but ultimately left Congress much like it began, deeply split as voters resisted big changes despite the heated race at the top of the ticket for the White House.

Biden rebuilding 'blue wall' in race for the White House

Joe Biden was pushing closer to the 270 Electoral College votes needed to carry the White House, securing victories in the “blue wall” battlegrounds of Wisconsin and Michigan, and narrowing President Donald Trump's path.

President Donald Trump's campaign filed lawsuits Wednesday in Pennsylvania, Michigan and Georgia, laying the groundwork for contesting battleground states as he slipped behind Democrat Joe Biden in the hunt for the 270 Electoral College votes needed to win the White House.

As ballot counting in the United States' presidential election seemed to be stalling Wednesday (Nov. 4), President Tsai Ing-wen (蔡英文) emphasized that the Democratic Progressive Party (DPP) bears the responsibility of deepening cooperation with whoever wins.

Joe Biden picked up a win in Wisconsin while fighting President Donald Trump in other battleground states that could prove crucial in determining who wins the White House.

Joe Biden won Arizona’s 11 electoral votes for president and Mark Kelly won a seat in the U.S. Senate, ushering in an era of Democratic leadership not seen Republicans dominated the 1952 election in the state.

Democrats losing paths to Senate control as GOP hangs on

Hopes fading for Senate control, Democrats had a disappointing election night as Republicans swatted down an onslaught of challengers and fought to retain their fragile majority.

President Donald Trump carried the prized battleground of Florida, then he and Democrat Joe Biden shifted their focus early Wednesday to three Northern industrial states — Wisconsin, Michigan and Pennsylvania — that could prove crucial in determining who wins the White House.

President Donald Trump falsely claimed victory over Democratic rival Joe Biden on Wednesday with millions of votes still uncounted in a tight White House race that will not be resolved until a handful of states complete vote-counting over the next hours or days.

Democrat Joe Biden's campaign says it will fight any efforts by President Donald Trump's campaign to go to the U.S. Supreme Court to prevent ballots from being tabulated.

Trump wins Florida, locked in other tight races with Biden

President Donald Trump carried Florida, the nation's most prized battleground state, and he and Democrat Joe Biden focused early Wednesday on the three Northern industrial states — Wisconsin, Michigan and Pennsylvania — that could prove crucial in determining who wins the White House.

Democrats and Republicans battled for control of the U.S. Senate in half a dozen closely fought races on Wednesday, as Republicans held the line in several contests that had seemed up for grabs only weeks ago.

Fox News leads U.S. TV networks in projecting the 2020 presidential election results, even as it and other news networks urged caution in interpreting early results.

'And the winner is?' - Risk of contested vote has U.S. allies on edge

As Americans head to the polls, prime ministers and presidents around the world face a delicate question - when to congratulate the eventual winner, especially given the risk the election result will be contested.

President Donald Trump was leading Democratic rival Joe Biden in the vital battleground state of Florida on Tuesday and in several other competitive swing states that will help decide the election, including North Carolina, Ohio and Texas.

Factbox: What a Joe Biden win could mean for financial policy

While Democratic presidential nominee Joe Biden is unlikely to prioritize a financial industry crackdown if he wins on Tuesday, he is expected to take a much tougher line than Trump and his former boss President Barack Obama.

Republicans are keeping their legal options open to challenge absentee ballots in Pennsylvania, if the battleground state could swing President Donald Trump’s reelection.

In a makeshift refugee camp just across the border from Brownsville, Texas, Oscar Borjas and a few friends are planning to gather on Tuesday night to watch anxiously as results from the U.S. presidential election roll in.

McConnell wins reelection, but control of Senate at stake

Republicans fought to keep control of the Senate on Tuesday in a razor-close contest against a surge of Democrats challenging President Donald Trump’s allies across a vast political map.

President Donald Trump was narrowly leading Democratic rival Joe Biden in the vital battleground state of Florida on Tuesday, while other competitive swing states that will help decide the election outcome, such as Georgia and North Carolina, remained up in the air.

EXPLAINER: What's 270? The math game behind the US election

Each state is allotted a different number of electoral votes, based on how many representatives it has in the House, plus its two senators. California has the most electoral votes with 55. Texas is next with 38 electoral votes. The candidate who wins New York or Florida can pocket 29 electoral votes toward the race to get 270.

Americans headed to the polls on Tuesday to decide whether incumbent Donald Trump or challenger Joe Biden will be elected president, after a tumultuous four years under the businessman-turned-politician that have left the country as deeply polarized as at any time in its recent history.

2020 could be the first year in which more than half of voters cast their ballot for president before polls open on Election Day. This map shows the facts about voting early, by mail or absentee.