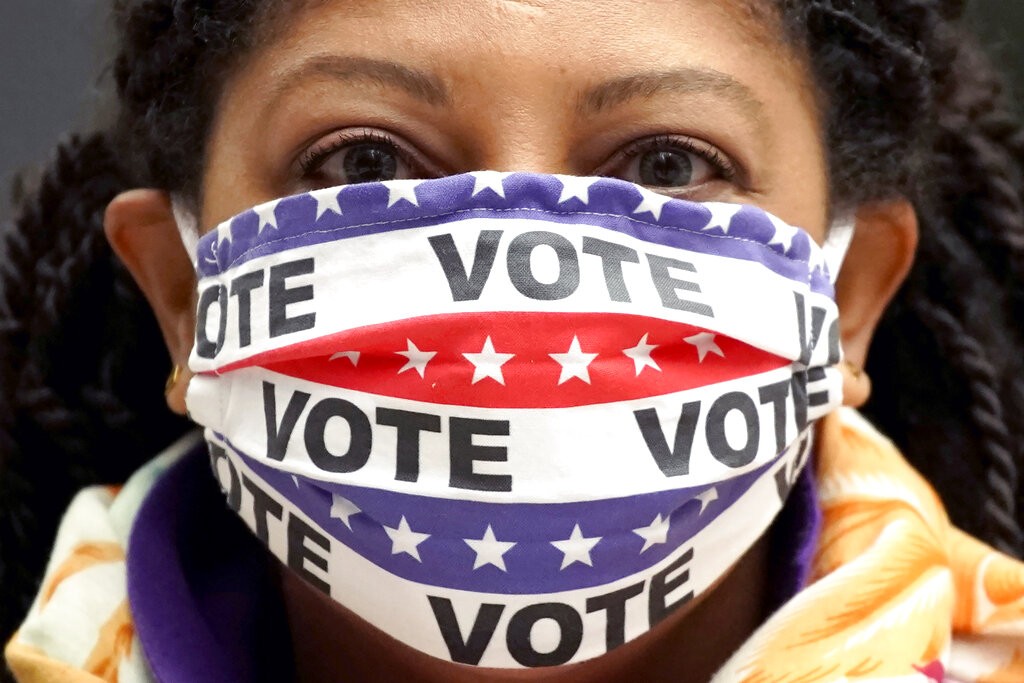 WILMINGTON, Del./WASHINGTON, Nov 3 (Reuters) - President Donald Trump was narrowly leading Democratic rival Joe Biden in the vital battleground state of Florida on Tuesday, while other competitive swing states that will help decide the election outcome, such as Georgia and North Carolina, remained up in the air.

The two contenders split the first U.S. states to be projected in the White House race, with conservative Indiana and Kentucky going to Trump and Democratic-leaning Vermont and Virginia going to Biden, according to projections by television networks and Edison Research.

But in Florida, a must-win state for Trump in his quest for the 270 electoral votes needed to win the presidency, Trump was leading Biden 50.3% to 48.7% with about 89% reported. Biden still has multiple paths to the 270 electoral votes he needs without Florida despite having spent lots of time and money trying to flip the state that backed Trump in 2016.

Voters, many wearing masks and maintaining social-distancing to guard against the spread of the coronavirus, experienced long lines in a few locales and short waits in many other places. There were no signs of disruptions or violence at polling sites, as some officials had feared.

The winner - who may not be determined for days - will lead a nation strained by a pandemic that has killed more than 231,000 people and left millions more jobless, racial tensions and political polarization that has only worsened during a vitriolic campaign.

A third of U.S. voters listed the economy as the issue that mattered most to them when deciding their choice for president while two out of 10 cited COVID-19, according to an Edison Research exit poll on Tuesday.

In the national exit poll, four out of 10 voters said they thought the effort to contain the virus was going "very badly." In the battleground states of Florida and North Carolina, battleground states that could decide the election, five of 10 voters said the national response to the pandemic was going "somewhat or very badly."

The poll found signs Trump was losing support among his core base of supporters in Georgia and Virginia.

Edison’s exit polls showed Trump winning seven in 10 white men in Georgia, down from eight in 10 against Hillary Clinton in 2016. And while Trump was winning with six in 10 voters who were at least 65 years old in Georgia, that was down from a seven in 10 four years ago.

Biden, the Democratic former vice president, has put Trump's handling of the pandemic at the center of his campaign and has held a consistent lead in national opinion polls over the Republican president.

Biden, 77, appeared to have multiple paths to victory in the state-by-state Electoral College that determines the winner; at least 270 electoral votes, determined in part by a state's population, are needed to win.

Opinion polls show Trump, 74, is close enough in several election battleground states that he could repeat the type of upset he pulled off in 2016, when he defeated Democrat Hillary Clinton despite losing the national popular vote by about 3 million ballots.

"I'm hopeful," Biden told reporters in his home state of Delaware, after earlier appearing in the pivotal state of Pennsylvania to make an 11th-hour appeal to voters.

Ahead of Election Day, just over 100 million voters cast early ballots either by mail or in person, according to the U.S. Elections Project at the University of Florida, driven by concerns about crowded polling places during the pandemic as well as extraordinary enthusiasm.

The total has broken records and prompted some experts to predict the highest voting rates since 1908 and that the vote total could reach 160 million, topping the 138 million cast in 2016.

A REFERENDUM ON TRUMP

Supporters of both candidates called the election a referendum on Trump and his tumultuous first term. No U.S. president has lost a re-election bid since Republican George H.W. Bush in 1992.

Among the most closely contested states that are expected to determine the outcome are Pennsylvania, Florida, Wisconsin, Michigan, North Carolina, Arizona and Georgia, with Democrats hoping that Biden may even threaten Trump in states that once seemed certain to go Republican such as Ohio, Iowa and Texas.

Voters on Tuesday will also decide which political party controls the U.S. Congress for the next two years, with Democrats narrowly favored to recapture a Senate majority and retain their control of the House of Representatives.

Biden is looking to win the presidency on his third attempt after a five-decade political career including eight years as vice president under Trump's predecessor, Barack Obama.

Biden has promised a renewed effort to fight the public health crisis, fix the economy and bridge America's political divide. The country this year was also shaken by months of protests against racism and police brutality.

(Reporting by Trevor Hunnicutt in Scranton, Pennsylvania, and Doina Chiacu in Washington; Additional reporting by Steve Holland and Susan Heavey in Washington and Katanga Johnson and Rich McKay in Atlanta Writing by Joseph Ax, Alistair Bell and John Whitesides; Editing by Will Dunham, Paul Thomasch and Howard Goller)