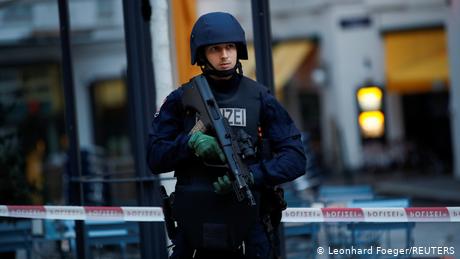 Hundreds of police have been deployed across Vienna to search for suspects after gunmen opened fire at multiple locations in the city, killing at least four people and injuring 17.

The shootings came as many people were out and about enjoying the last evening before a nationwide coronavirus lockdown was due to come into force.

One suspected attacker, who was armed with an assault rifle and wearing a fake suicide vest, was shot dead by police.

Interior Minister Karl Nehammer told an early morning press conference on Tuesday that investigations indicated the man was a sympathizer of the extremist group "Islamic State." He added that more perpetrators may be on the run and urged citizens to stay home if possible.

Two men and two women have been confirmed dead. Health authorities cited by Austria's APA news agency also said seven victims of the attack were in a critical, life-threatening condition in hospital.

What we know about the gunmen

Austrian Chancellor Sebastian Kurz described the shootings as a "repulsive terror attack" and urged the country to unite in the wake of the killings.

In a televised address on Tuesday, he vowed that Austria would defend its democracy, fundamental rights and its liberal way of life.

"We will never allow this hatred to gain ground," Kurz said in a televised speech.

"We must be aware that this is not a conflict between Christians and Muslims or between Austrians and migrants," he added. "Our enemy - Islamist terrorism - does not only want to cause death and pain, but it wants to split our society."

How have leaders reacted?

French President Emmanuel Macron was one of the first foreign leaders to react on Monday night. France has been grappling with a series of deadly terror attacks in recent weeks, including the beheading of a school teacher in a Paris suburb and a knife attack at a church in Nice.

"We must let our enemies know what they are up against. We will not give in," he said.